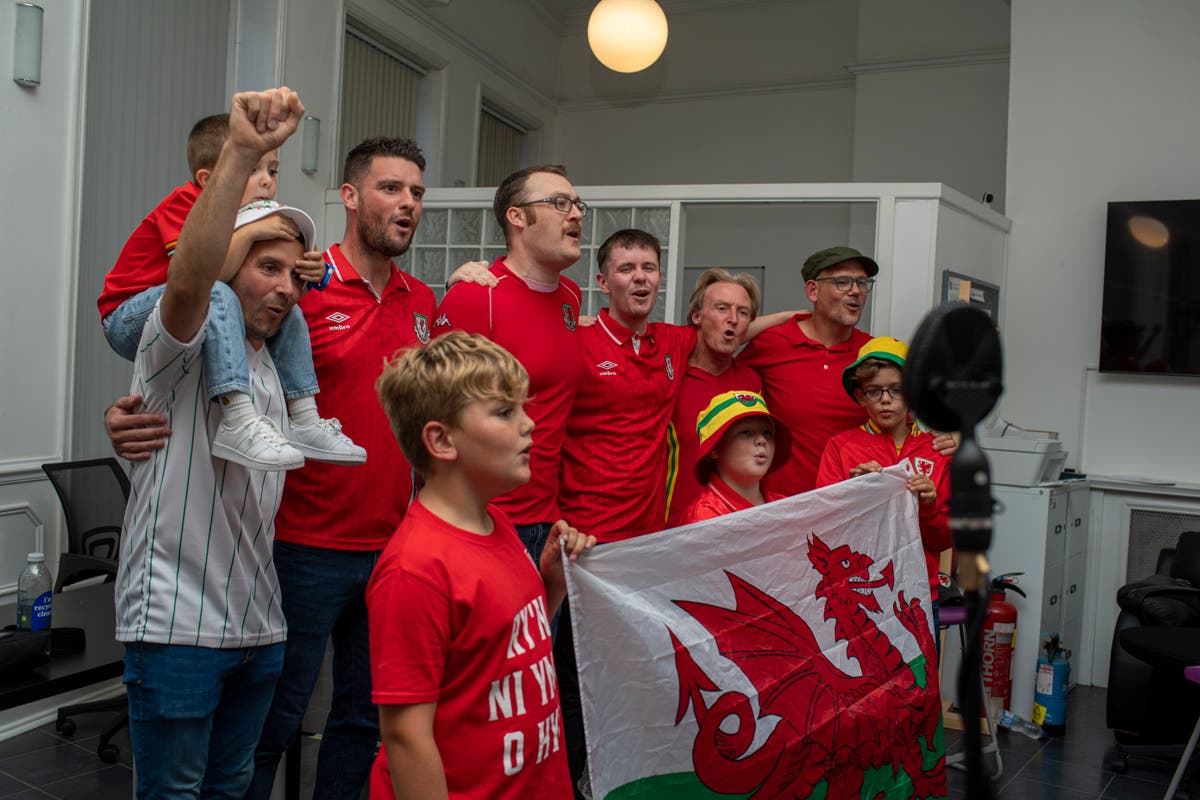 Those behind the song We’ve Got The Red Wall hope it will become a hit on the terraces and make it to number one before the tournament kicks off in Qatar in November.

All the money raised by the single will go to Gol Cymru, the Wales football supporters’ charity that helps underprivileged children in the countries the team plays in.

Singer-songwriter and Wales fan Andrew Dowling, who wrote the lyrics, said: “When Wales qualified for the World Cup I was so excited that lyrics started coming to mind straight, and it just sparked from there, really.

“I thought: why not record a Wales World Cup anthem and at the same time try and raise as much money as we can for charity?”

The 37-year-old from Ton Pentre in the Rhondda Valley, South Wales, who once had his sights on becoming a rock star and was crowned 2005 karaoke champion of Wales, has laid down the track’s vocals.

Fans were then invited to a studio in Cardiff Bay this week to help with the finishing touches, adding authenticity to the anthem by chanting the chorus as well as shouting: “Wales!”

The song features verses in both English and Welsh, while the chorus is in English only, with lines such as: “Support the boys, and make some noise in Qatar”.

Mr Dowling, a Welsh learner, said it was important to him that the song includes the country’s native language.

Welsh football has been credited in recent years with prompting a resurgence of people taking up learning the language.

Having been one of the driving forces behind getting Dafydd Iwan’s Yma o Hyd to number one on the iTunes charts after Wales’ qualifying match, Mr Dowling hopes the success of that campaign will bode well for his latest endeavour.

“This is very much a fan-led thing, we’ve had nothing official from the FAW (Football Association Wales),” Mr Dowling said.

“This has been a real beg, borrow, steal effort to get it recorded and produced and for everyone to be a part of it, and I’m already so bowled over by the support we’re getting.”

Among the fans to feature on the track is 11-year-old superfan Ioan Walters, from Crosskeys in Newport.

He said: “I’m a big fan of Wales, I go to all the home matches, and I just wanted to be a part of the song.”

Rhys Owen, who lives in Splott, Cardiff, said: “I just want to make the most of every second Wales is in this position so I thought I might as well get involved.

“With the small number of fans who will actually be able to go out to Qatar, I think things like this are really important to show our support for the team.”

Lawrence Mora, talkSPORT pundit and creative director of Eat Sleep Media where the song was recorded, has provided commentary over the track.

He told the PA news agency: “I was at the Cardiff City Stadium for talkSPORT when Wales qualified and it was one of the most emotional occasions I’ve ever experienced, so being able to re-enact that again in terms of commentary for the song was really special.

“I’m going to be out in Qatar heading for the USA and Iran game and I’m definitely going to put this on my travel playlist.

“What Gol Cymru do is incredibly inspiring and they’ve done a lot of good all over the world so I would urge people to go out and buy it.

“If not for my vocals and Andrew’s beautiful singing, then do it for the kids.”

The charity’s founder Tim Hartley said: “I really love this song and we are grateful that the proceeds of it will go to helping us help the children.

“Let’s sing it with pride and make it the fan’s own anthem for Qatar.”

The single We’ve Got The Red Wall will be released on Friday September 30.