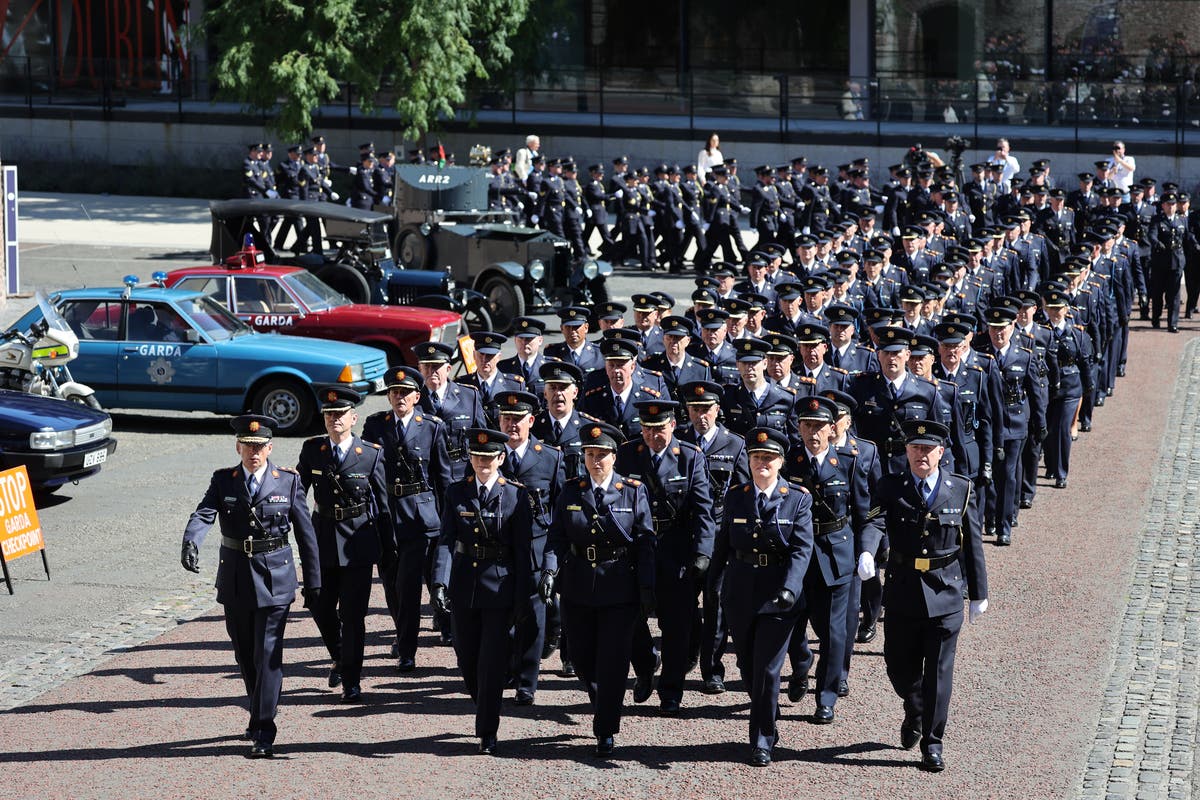 he threat to Ireland’s democracy has “not fully dissipated”, the Garda Commissioner has said.

Drew Harris described the work undertaken by gardai to counteract the “very real and sustained threats” to the country’s national security as the “greatest achievement” of the police service in the past century.

Mr Harris made the comments at an event on Saturday marking the anniversary of the transfer of policing duties from British rule 100 years ago this month.

About 450 gardai retraced the steps the first Garda commissioner Micheal Staines took, along with Ireland’s newly formed Civil Guard, as they marched into Dublin Castle, the headquarter of British rule, for the handover of duties on August 17, 1922.

The parade began at the Gresham Hotel in O’Connell Street, the location for the meeting in February 1922 of the committee formed by Michael Collins to establish a new police service for the State, before making its way to Dublin Castle via Dame Street.

It included members of the Garda band, the ceremonial unit, officers corps and other units.

Mr Harris told the crowd gathered the Garda, Ireland’s national security service, had encountered and responded to “difficult periods” in Ireland’s past.

“Many of us here will remember there was a time, not so long ago in fact, when our democracy was under direct threat,” he said.

“An Garda Siochana was at the forefront of protecting our democracy during those dark days.

“This threat has not fully dissipated and, of course, there are also now further threats to State security from outside this island.

“By its nature, this aspect of our work often cannot be discussed in detail or in public at all.

“But remarkable work has been done to counter very real and sustained threats to our national security from a range of actors.”

He described this work as one of the Garda’s “greatest achievements over the past century”.

He also paid tribute to the 89 gardai who have died on duty, adding their “ultimate sacrifice remains with us always”.

“They are the epitome of An Garda Siochana,” he said.

“Dedicated guardians of the peace.”

During the parade they replicated a photograph, taken on August 17, 1922 of Mr Staines and the force as they arrived at Dublin Castle through the Palace Street Gate.

The Civic Guard, formed by Michael Collins and the Irish Government in 1922, was later renamed An Garda Siochana.

The ceremony also included a performance by the Garda band of a specially commissioned piece of work by Odhran O Casaide.

The Commissioner described the transfer of policing duties from British rule as a “pivotal” moment.

He told the crowd gathered the 14,000 gardai and 3,000 garda staff are all working to “uphold the ideals of those who founded us 100 years ago”.

She said Commissioner Staines and his new force marched into Dublin Castle at a “time of great danger in Ireland”, in the midst of the beginnings of a Civil War.

Michael Collins was killed five days later during an attack at Beal na Blath in Cork.

“Amongst the chaos of those times, the establishment of our National Police Service, an unarmed service helps to pave the way for stability and confidence in the new independent Ireland,” she said.

“It was one of the key foundation stones of the Irish Free State and without a shadow of a doubt one of its greatest successes.

She added: “Those brave young man in 1922 succeeded, coming together with a former opponent to gain the trust and the respect of the people that were divided by the Civil War. The forged a strong connection with the community a connection that remains the aim of so ,any police forces right across the world today.”