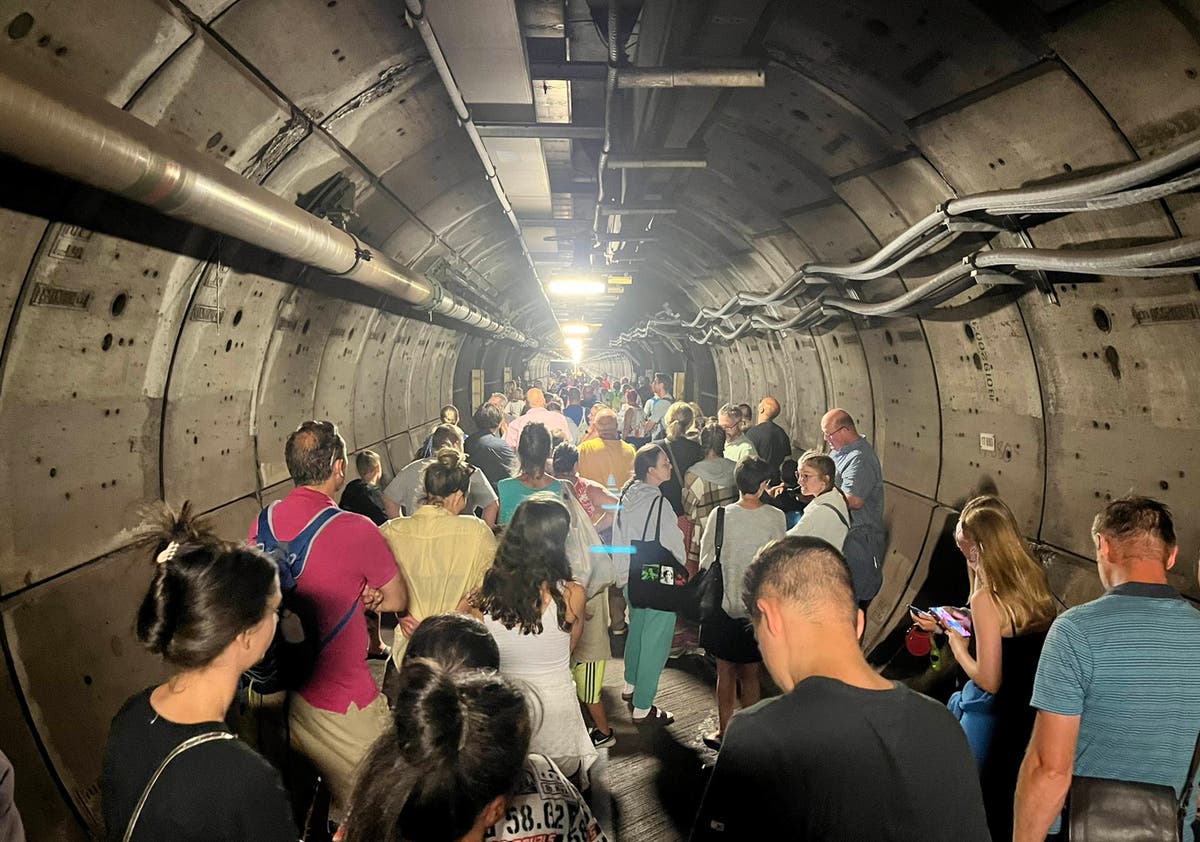 urotunnel passengers had to wait for hours in a service tunnel underneath the English Channel after their broke down on Tuesday afternoon.

The passengers were transferred to a cargo train but complained of being stuck in the sub-sea tunnel for nearly five hours, citing issues with the replacement transport.

The initial breakdown late on Tuesday affected the 3.50pm Eurotunnel Le Shuttle service from Calais to Folkestone and led to hundreds of passengers being ushered into a service tunnel.

Videos on social media showed holidaymakers walking through the alternate tunnel alongside the 31-mile rail route between Britain and France, some with suitcases and dogs.

Meanwhile travellers in Calais were told to stay away from the terminal until 6am on Wednesday, with pictures showing gridlock at the shuttle terminal late into Tuesday evening.

A spokesman for Eurotunnel Le Shuttle said: “A train has broken down in the tunnel and we are in the process of transferring customers to a separate passenger shuttle via the service tunnel, to return to our Folkestone terminal.

“We apologise sincerely for this inconvenience.”

The spokesman added: “Due to the earlier train fault, we advise you not to travel to the terminal tonight.

“Please arrive after 6am tomorrow.”

Michael Harrison, from Cranbrook, Kent, one of those on the evacuated train said: “We got on the 3.50pm crossing, approximately 10 minutes in the lights went out and the train stopped.

“They reset things and set off for another five minutes.

“It happened again at which time we waited a further couple of hours to decide they couldn’t see a problem but had to evacuate the train to another train.

“After further waiting we left the train through the emergency link tunnel to the service tunnel.

“We then walked approximately 10 minutes to a train in front of the stricken train.

“This was a bus carriage where we got transported to Folkestone.

“That train then stopped as it couldn’t get traction, presumably as it was long and had no weight on it.

“There were gasps of incredulity when that was announced.

“We finally arrived in Folkestone six hours after boarding.”

Another passenger who was evacuated, but did not want to be named, said that “several people were freaking out about being down in the service tunnel, it’s a bit of a weird place”.

He added: “We were stuck down there for at least five hours.

“If I’ve got a gripe it’s that they knew several hundred people were arriving at Folkestone who hadn’t eaten for five, six or more hours and there was absolutely nothing for us here.”

Journalist Bruce Atkinson, caught up in the delays at Calais, tweeted: “Sitting in the boarding queue at Calais with no idea how long we will be waiting. Been here 4 hours so far.”

Jonel Schwarz added on Twitter: “We’ve been caught in the trap for over 4 hours. Had we been given any info sooner we never would have entered the trap in the first place.”

Kate Scott, 43, from Surrey who was travelling with her husband and two children from a family holiday in France, told PA: “We’re finally on the road now after almost eight hours from Calais to Folkestone, when it should be 35 mins.

“The heat sensor alarm went off so they had to do a full train inspection, then we got going again and five or ten minutes later we stopped again and they did the same thing again.

“Three or four hours after leaving Calais they said ‘look we’re not going anywhere, we’ve got to evacuate’ so they got us on to another train. It was hot, there was no air con, they gave out water but we didn’t really know what was going on.

“They told us to get out of our cars and get to the front of the train, where we waited for nearly an hour with no information at all in the boiling hot. People were getting a bit agitated.

“They eventually opened the doors and we had to walk down the train, down the service tunnel where we were held for another 40 minutes for the evacuation train.”

Sarah Fellows, 37, from Birmingham, will have taken 18 hours to return home from a family holiday in France after the “utter carnage” of the evacuation.

She told PA: “The service tunnel was terrifying.

“You were just walking into the abyss not knowing what was happening. We all had to stay under the sea in this big queue.

“Fire and rescue were there.

“There was a woman crying in the tunnel, another woman having a panic attack who was travelling alone.

“They were expecting really older people to walk for a mile down the middle of a tunnel under the sea.

“It was utter carnage when we arrived in Folkestone as they hadn’t really prepared for us arriving.

“It just wasn’t organised of how to evacuate that train.

“I was panicking at one point and Border Force told us the tunnel had been evacuated one other time in the last 17 years, not recently.”