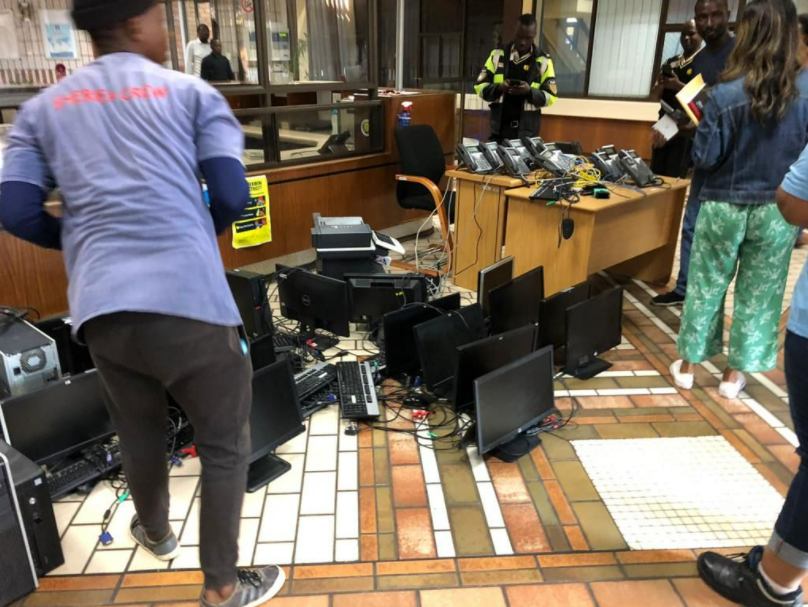 The eThekwini municipality says it has no plans to pay back millions owed to an electrical contractor and will challenge the attaching of its assets, which was ordered by the Kwazulu-Natal High Court in Durban.

This, after officials were seen carrying computers and other equipment out of its electricity department offices and loading it onto a flatbed truck on Thursday.

The municipality’s spokesperson, Musawenkosi Mayisela, told TIF News the City wanted the service provider to “stop what they are doing” – and, if not, the municipality would escalate its grievances to the Supreme Court of Appeal.

“Our legal team is currently approaching this company to stop whatever they are doing, failing which we would have to secure a court interdict. The matter is being appealed at the Supreme Court of Appeal,” said Mayisela.

READ | Saftu, Cosatu vow national shutdown is just the beginning of mobilisation for their demands

TIF News understands that the sheriff of the court seized office equipment, including printers, computers and telephones, at the municipality’s offices in Jeff Taylor Crescent, Stamford Hill, after the City failed to pay back R30 million, plus R13 million in interest, to the service provider.

A warrant of execution was issued by the court on 28 May 2022, which instructs the sheriff to attach the City’s assets to recover the total amount.

TIF News reported that the company, Daily Double Trading (trading as Pholobas Projects), approached the court for an order to declare the City had unlawfully blacklisted it. The company asked for R44 million.

The Witness reported that the high court granted this order in April.

Speaking to TIF News on Thursday, Mayisela said he would not delve into the merits of the matter and reiterated that the municipality would not pay the company.

He said the City’s employees’ jobs were safe, despite the seizure.

“We have the responsibility to protect taxpayers’ money. We are not prepared to pay. There is no need to worry about jobs,” said Mayisela.

The eThekwini municipality will appeal the seizure of its assets on Thursday.

The IFP spokesperson in eThekwini, Mdu Nkosi, told TIF News the seizure was an embarrassment. He also expressed concern about the impact on service delivery.

“It can’t be that the municipality is always making news for the wrong reasons. The City is losing hours that it should utilise on service delivery. If this is a matter of not having money, they should be transparent about that. I am also concerned that the initial R30 million owed by the City has incurred interest of R13 million, money that should cover service delivery,” he said.

DA councillor Thabani Mthethwa said the party had received “frantic voice notes and messages” from employees regarding what was happening.

Mthethwa said the City could have prevented this, had it responded to the judgment timeously.

“It is unfathomable how the City’s legal compliance unit would allow the situation to reach this stage. A report on this matter, particularly on the judgment, was never tabled at any committee, Exco or even council for consideration, despite it being months old.

“The document reveals a court date stamp for May 2022, which infers that the legal unit representing the City was clearly expecting that this was inevitable if the judgment was not satisfied,” said Mthethwa.

He said the DA wanted answers about the impact of the seizure on service delivery.