By AdminAugust 6, 2022No Comments6 Mins Read 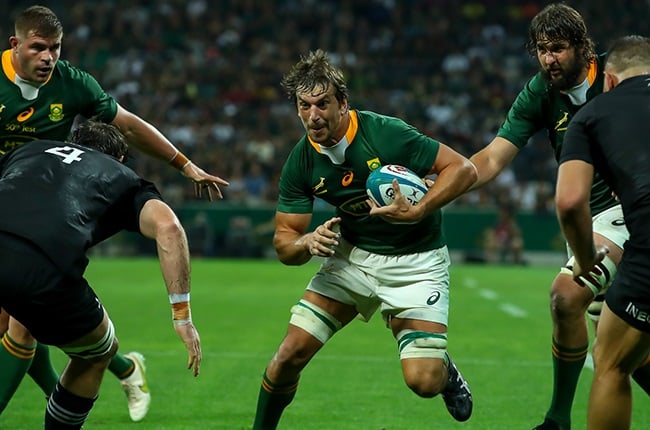 The Springboks
produced an uncompromisingly physical, rabidly aggressive and their most
tactical assured showing since becoming World Champions to break their
eight-year hoodoo against the All Blacks by beating them 26-10 at the Mbombela
Stadium on Saturday.

They may have
finished the game with 14 men after try-scorer Kurt-Lee Arendse knocked himself
out and got sent off for taking out Beauden Barrett in the air, but they were
too far ahead at that point.

They may have
failed to keep the All Blacks tryless in a Bok win for the first time since the
Wellington success in 1998, but the 16-point buffer was by far their most
convincing winning margin in the professional era.

It wasn’t
pretty – seldom is the Bok way of rugby – and it is said that only a mother could
love how they go about their business.

However, they
earned the love of not just the 42 387 who packed into the giraffe-propped
nation, but the entire country.

It was
faultless and flawless in every sense.

In what was a frenzied
start, the Boks suffered a massive blow when just 40 seconds into the game,
hometown hero Faf de Klerk was knocked out cold when he successfully tackled
All Black wing Caleb Clarke.

The capacity
crowd went into a hush, but cheered ‘Faffie, Faffie, Faffie’ in a lovingly
loud, but futile attempt to get him to wake up.

He was able to
signal a thumbs up as he was stretchered off, much to the delight of the crowd
that packed the stadium to a point where none of the zebra-striped seats was
visible.

When he reappeared
again in the 19th-minute, the decibels of the cheers exceeded that of Arendse’s
try.

From the scrum
that followed De Klerk’s injury, the Springboks initially forced a freekick,
from where the next scrum was a penalty.

The message
sent to the All Blacks was loud and clear.

The resultant
lineout maul and the rest in the first half were well defended by the All
Blacks, a sign of the first fast learning from new forwards coach Jason Ryan.

However, it
became clear the Boks, with slight variations here and there, were going to ask
the same question over and over until the All Blacks had an answer.

The Boks’
kicking game had come under serious scrutiny in the Wales series, but it
resulted in the Boks’ first try through Arendse in the eighth-minute.

Handre
Pollard’s up-and-under was pin-point, and so was Arendse’s chase that saw him
beat Beauden Barrett to the ball.

He tapped back
to Lukhanyo Am and a few phases later, Arensdse scored a try that simply blew
off the roof.

The Boks’ modus
operandi became simple in that they kept the ball in close quarters until an
overlap was created.

The said
overlaps, because of New Zealand’s rush defence, prevented them from coming,
but the kicking game was the one that created the space.

One such moment
was in the 25th minute where the aerial ping-pong created space on the outside
that the Boks exploited well.

However, with
two men on his outside, Damian de Allende chose to put in a grubber instead of
motoring forward or passing.

Allied with
Pollard’s 22nd-minute penalty that emanated from a ruck offence by All Black
captain Sam Cane, that potential try would have taken the Springboks two scores
ahead.

That said, the
All Blacks were being out-muscled in the collisions and scrums, but found a way
to get forward.

Once such moment
was a helter-skelter movement started by Beauden Barrett when he excellently
kept in a Damian Willemse touch-finder that would have resulted in a 50:22
lineout for the Boks.

With the
defence scattered, he took on a mazy run, that ended near the halfway line with
a knock-on.

The one thing
the Boks did in their defence was to be aggressive, even though they battled to
read the pass out from behind from the All Blacks (which they rehearsed
religiously this week) that created an extra man on attack.

They also
forced the All Blacks into pick-and-drives that allowed the Boks to be
successfully selective with their breakdown scavenges.

The All Blacks,
who hardly got any purchase in the Boks’ half and the few times they got into
the 22, only had a 35th-minute Jordie Barrett penalty to show for their
efforts.

The second half
started with plenty of endeavour from both sides, with New Zealand again
showcasing their counter-attacking danger, but it was the Boks who put points
on the board through Pollard’s 51st-minute penalty.

That pushed the
buffer to 10 points, something that was going to force the All Blacks to do
most, if not all of the playing.

The All Blacks
were also dealt a blow when Jordie Barrett came off in the 53rd-minute, with
the excellent Malcolm Marx also coming off a minute later with a suspected
shoulder injury sustained while effecting yet another turnover.

The All Blacks
though, were playing with far more venom and intent, upon the realisation of
chasing the game, but they were also error-strewn.

Australian
referee Angus Gardner, who’s generally not the best of match officials on any
given day, policed the breakdowns and the offside line (New Zealand’s in
particular) with an eagle eye.

Nothing got
away from him and to his credit, penalised the teams equally on the same
offences. This was probably one of his better, if not best Test match.

The Boks took
advantage then took advantage of a 56th-minute All Black offside penalty to
work their way upfield, from where Pollard landed a drop-goal.

The clear
two-converted try gap forced the All Blacks to be even desperate in their
attack, which meant accuracy and handling were sacrificed.

Where they
improved significantly was in the scrums and the line-out contestation, even
though the Boks were equal to the task.

What the All
Blacks couldn’t do wasn’t to play beyond the advantage line for any significant
amount of time, with one instance forcing a 72nd-minute penalty that Pollard
converted to push the gap out to 16 points.

The All Blacks
did capitalise on the one-man advantage when a Caleb Clarke break lead to
Shannon Frizzell’s 79th-minute try.

However, the
Boks’ aggressive defence forced another mistake that led to Willie le Roux’s
try that simply blew the roof off the acoustically excellent stadium