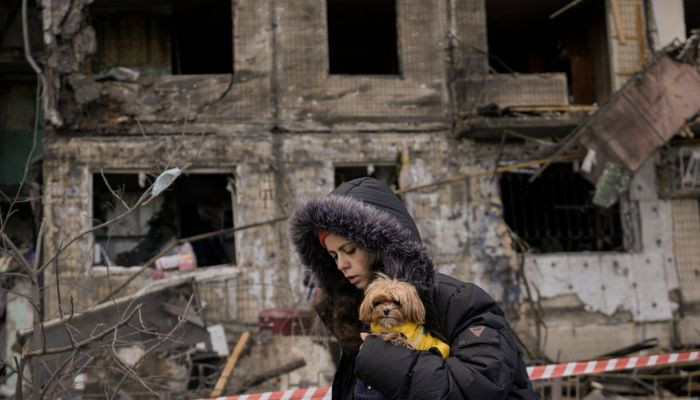 A Russian missile attack killed 22 civilians and set a passenger train on fire in eastern Ukraine as the country marked its Independence Day under heavy shelling, officials in Kyiv said.

President Volodymyr Zelenskiy had warned of the risk of “repugnant Russian provocations” ahead of the 31st anniversary on Wednesday of Ukraine’s independence from Moscow-dominated Soviet rule, and public celebrations were cancelled.

In a video address to the United Nations Security Council, Zelenskiy said rockets hit a train in the small town of Chaplyne, some 145 km (90 miles) west of Russian-occupied Donetsk in eastern Ukraine.

“Chaplyne is our pain today. As of this moment there are 22 dead,” he said in a later evening video address, adding Ukraine would hold Russia responsible for everything it had done.

Zelenskiy aide Kyrylo Tymoshenko later said Russian forces had shelled Chaplyne twice. A boy was killed in the first attack when a missile hit his house, and 21 people died later when rockets hit the railway station and set fire to five train carriages, he said in a statement.

The Russian defence ministry did not immediately respond to a request for comment. Russia denies targeting civilians.

“Russia’s missile strike on a train station full of civilians in Ukraine fits a pattern of atrocities. We will continue, together with partners from around the world, to stand with Ukraine and seek accountability for Russian officials,” U.S. Secretary of State Antony Blinken said on Twitter.

The port city fell to Russian forces in April after weeks of intense shelling as they encircled Ukrainian holdouts at the Azovstal steel plant.

Presidential adviser Arestovych said Zelenskiy made clear Kyiv would “never, ever” consider peace negotiations with Moscow if the trials went ahead.

U.S. Secretary of State spokesperson Ned Price said the unlawful process would amount to a “mockery of justice.”

Ukraine declared independence from the disintegrating Soviet Union in August 1991, and its population voted overwhelmingly for independence in a referendum that December.

Celebrations of the Aug. 24 public holiday were cancelled, but many Ukrainians marked the occasion by wearing embroidered shirts typical of the national dress.

Air raid sirens blared at least seven times in the capital Kyiv during the day though no attacks transpired.

Zelenskiy and his wife, Olena Zelenska, joined religious leaders for a service in Kyiv’s 11th-century St. Sophia cathedral and laid flowers at a memorial to fallen soldiers.

The 44-year-old leader said Ukraine would recapture Russian-occupied areas of eastern Ukraine and the Crimean peninsula, which Russia annexed in 2014.

Ukrainian forces shot down a Russian drone in the Vinnytsia region while multiple Russian missiles landed in the Khmelnytskyi area, regional authorities said – both west of Kyiv and hundreds of kilometres from front lines.

No damage or casualties were reported, and Reuters could not verify the accounts.

Russia has repeatedly denied its forces are aiming at civilian targets. Russian Defence Minister Sergei Shoigu told a meeting in Uzbekistan that Moscow had deliberately slowed down what it refers to as its “special military operation” in Ukraine to avoid civilian casualties.

At a UN Security Council session on Wednesday, Russian Ambassador Vassily Nebenzia reiterated Moscow’s rationale for its actions in Ukraine, saying a “special operation” was needed to “denazify and demilitarise” the country to remove “obvious” security threats to Russia.

Moscow’s stance has been dismissed by Ukraine and the West as a baseless pretext for an imperialist war of conquest.

U.S. President Joe Biden announced nearly $3 billion for weapons and equipment for Ukraine in Washington’s “biggest tranche of security assistance to date”. Under Biden, the United States has committed more than $13.5 billion in military aid to Ukraine.

Russia has made few advances in recent months after its troops were repelled from Kyiv in the early weeks of the war.

Ukraine’s top military intelligence official, Kyrylo Budanov, said on Wednesday Russia’s offensive was slowing because of low moral and physical fatigue in its ranks, and Moscow’s “exhausted” resource base.

Russian forces have seized areas of the south including on the Black Sea and Sea of Azov coasts and large tracts of Luhansk and Donetsk provinces that comprise the eastern Donbas region.

The war has killed thousands of civilians, forced more than a third of Ukraine’s 41 million people from their homes, left cities in ruins and shaken the global economy, creating shortages of essential food grains and pushing up energy prices.