‘We Forced Them Well Back’: Fighting Intensifies in Ukraine’s South – The Moscow Times 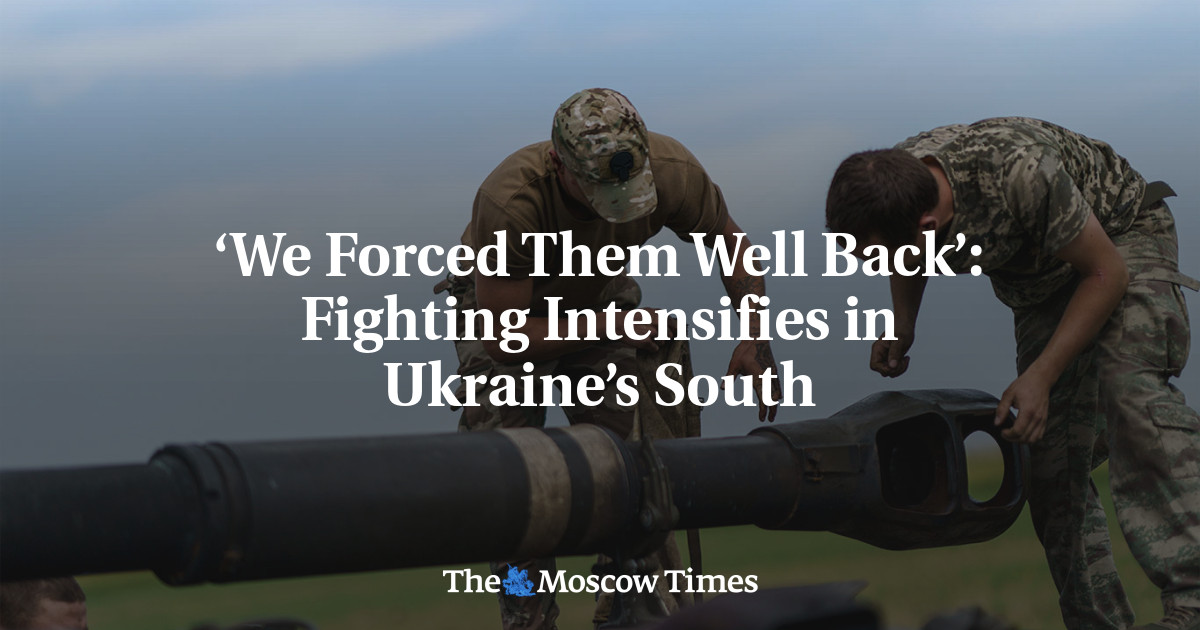 Ukrainian missile strikes, shelling and reports of advances near the Russian-held city of Kherson on Tuesday suggested that a Ukrainian offensive in the south of the country was gathering steam.

In its morning update, the president’s office in Kyiv said “heavy fighting” was “taking place in almost the entire territory of the Kherson region.”

While Russian officials sought to downplay the Ukrainian assault, it appeared that Ukrainian forces were pushing forward, with strikes on the strategic Antonivskyi Bridge across the Dnipro River and gunfire and explosions in Kherson itself.

In the town of Bereznehuvate — near the frontlines 70 kilometers north of Kherson — reporters from AFP saw soldiers resting by the roadside and heard artillery fire.

“We forced them well back,” said infantryman Victor, in his 60s, who declined to give a surname. But his commander Oleksandr predicted the fight to retake Kherson will be “long and complicated.”

Videos shared by pro-Kremlin Telegram channels showed evidence of Ukrainian HIMARS missile systems operating near Kherson and news outlets reported gunfire Tuesday morning in Kherson, which was seized by Russian forces shortly after the start of the invasion.

“It’s very loud,” one Kherson resident told The Financial Times. “For the second day there hasn’t even been an hour break where something did not explode or bang,” she said. “It’s scary, but at the same time joyful when you hear the sound of explosions.”

It was not immediately possible to confirm who was involved in the shooting in Kherson, but Russian-installed official Kirill Stremousov said in comments to state-run TASS news agency Tuesday that Ukrainian spies and saboteurs were killed in the city.

Amid reports of a Ukrainian strike on the Antonivskyi Bridge, a key supply route into Kherson, Ukraine said that it could target any crossing over the Dnipro River.

Natalia Humeniuk, a Ukrainian military spokesperson, told a briefing that Kyiv could destroy any pontoon bridge or ferry across the river, Reuters reported.

“The whole area where such a crossing can be built is under our fire control and [any new structure] will be hit,” she said, according to Reuters.

Despite the statements by Ukrainian officials and evidence of increased fighting, Moscow played down the threat posed by a major Ukrainian offensive.

“The special military operation is continuing methodically according to plans that are in place,” President Vladimir Putin’s spokesman Dmitry Peskov told reporters during a daily briefing Tuesday. “All objectives will be achieved.”

And Russian-appointed officials in the region claimed that there were no signs of a Ukrainian military advance.

“The assault and victory of Ukraine’s Armed Forces is only on Telegram channels,” Katerina Gubareva, the deputy head of the Russian appointed administration to Kherson, posted on messaging app Telegram.

Flanked by the Dnipro river to the east and south, as well as the Inhulets river  — a tributary of the Dnipro — to the north, Kherson has become a key aim for Ukrainian forces.

Looks like another Ukrainian strike near the Antonovskiy bridge. Possibly targeting the ferries or pontoon bridge being built. https://t.co/dK34wTdZ0Z pic.twitter.com/TABWzbdhuW

“If they want to survive, it’s time for the Russian military to run away. Go home,” Ukrainian President Volodomyr Zelensky said in a late night address Monday after Ukraine announced the start of a military operation in the south of the country.

Russia is believed to have about 20,000 troops in the city.

Whether the recent escalation in violence represents the first steps to that counter offensive is “too early to tell,” according to defense analyst Konrad Muzyka of the Poland-based Rochan Consulting agency.

Ukraine appeared to be attacking with relatively limited supplies, Muzyka told The Moscow Times, meaning the offensive could still be in its early stages.

Attempts to permanently dislodge Russian forces west of the Dnipro River could take months, Oleksiy Arestovych, an adviser to Zelensky, said in a Telegram post Monday.

“Of course, many would like a large-scale offensive with news about the capture by our military of a settlement in an hour,” he wrote. “But we don’t fight like that… funds are limited.”