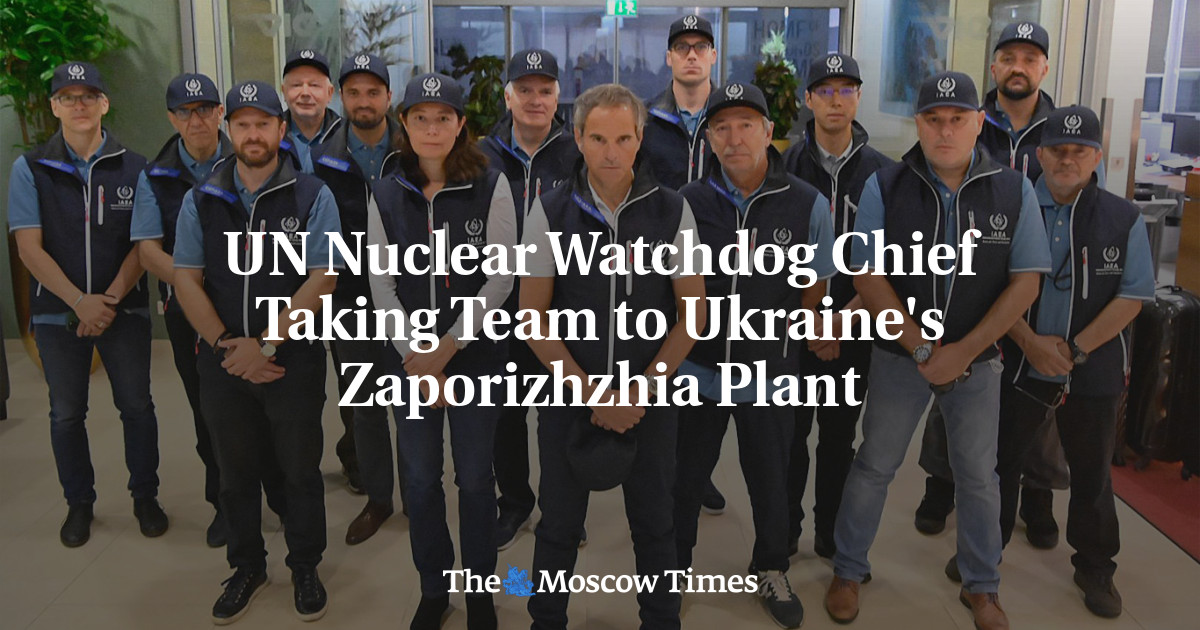 International Atomic Energy Agency chief Rafael Grossi said on Monday he was en route to inspect Ukraine’s Zaporizhzhia nuclear plant, which has been targeted by fresh shelling over the past day, according to its operator.

The Zaporizhzhia plant, Europe’s largest atomic facility, has been occupied by Russian troops since the start of the war.

Moscow and Kyiv are trading blame for shelling around the complex of six Soviet-designed nuclear reactors in the city of Energodar, in southern Ukraine.

Last week the plant was briefly cut off from the national grid for the first time in its four-decade history owing to Russian shelling of the last working power line, Ukrainian President Volodymyr Zelensky said.

Over the weekend, Ukrainian nuclear agency Energoatom, which operates the plant, warned of the risk of a radiation leak.

Nevertheless, “during the last day, the Russian military continued to fire at Energodar and the site of the Zaporizhzhia nuclear power plant,” the agency said Monday morning.

Ten people were injured, including four plant workers, and as of 10:00 am (0700 GMT) the plant “operates with the risk of violating radiation and fire safety standards,” Energoatom said on Telegram.

“The occupiers, preparing for the arrival of the IAEA mission, increased pressure on the personnel of the plant to prevent them from disclosing evidence of the occupiers’ crimes at the plant and its use as a military base,” it added.

The International Atomic Energy Agency (IAEA) has for months been asking to visit the site, warning of “the very real risk of a nuclear disaster.”

On Monday Grossi said “the day has come” and that an IAEA support and assistance mission is “now on its way.”

On Twitter the IAEA director general said the team from the UN nuclear watchdog would arrive at the power plant “later this week.”

In a photograph accompanying his tweet, Grossi posed with a team of 13 people wearing caps and sleeveless jackets bearing the IAEA logo.

The United Nations has called for an end to all military activity in the area surrounding the complex.

Ukraine initially feared an IAEA visit would legitimise the Russian occupation of the site before finally supporting the idea of a mission.

The G7 industrial powers on Monday demanded access “without impediment” for the IAEA team.

They must be allowed to “engage directly, and without interference, with the Ukrainian personnel responsible for operating these facilities,” the G7 Non-Proliferation Directors Group said in a statement.

But Ukraine’s foreign minister, Dmytro Kuleba, said in Stockholm: “This mission will be the hardest in the history of the IAEA, given the active combat activities undertaken by the Russian federation on the ground and also the very blatant way that Russia is trying to legitimise its presence.”

Last week, the advisor to the Ukrainian energy minister said she was skeptical the team would even reach the plant.

Advisor Lana Zerkal told Ukraine’s Radio NV that Russia was “artificially creating all the conditions so that the mission will not reach the site,” despite formally agreeing to the inspection.

Ukraine was the site of the world’s worst nuclear catastrophe in 1986, when a reactor at the northern Chernobyl plant exploded and spewed radiation into the atmosphere.

Experts say any leak at Zaporizhzhia would more likely be on the scale of the 2011 Fukushima disaster in Japan.

Energoatom warned on Monday that any leak would scatter radiation over swathes of southern Ukraine and south-western regions of Russia.

Kyiv suspects Moscow intends to divert power from the Zaporizhzhia plant to the Crimean Peninsula, annexed by Russia in 2014.

But Russia insists Ukraine is responsible for shelling around the complex.

Russia’s defence ministry said on Saturday that Ukrainian forces had “shelled the territory of the station three times” from the town of Marganets across the Dnipro River.

Radiation levels at the plant “remain normal,” it said.

But residents in the Ukraine-held areas around the plant are being equipped with iodine pills to reduce the medical risk of radiation in the event of a disaster.