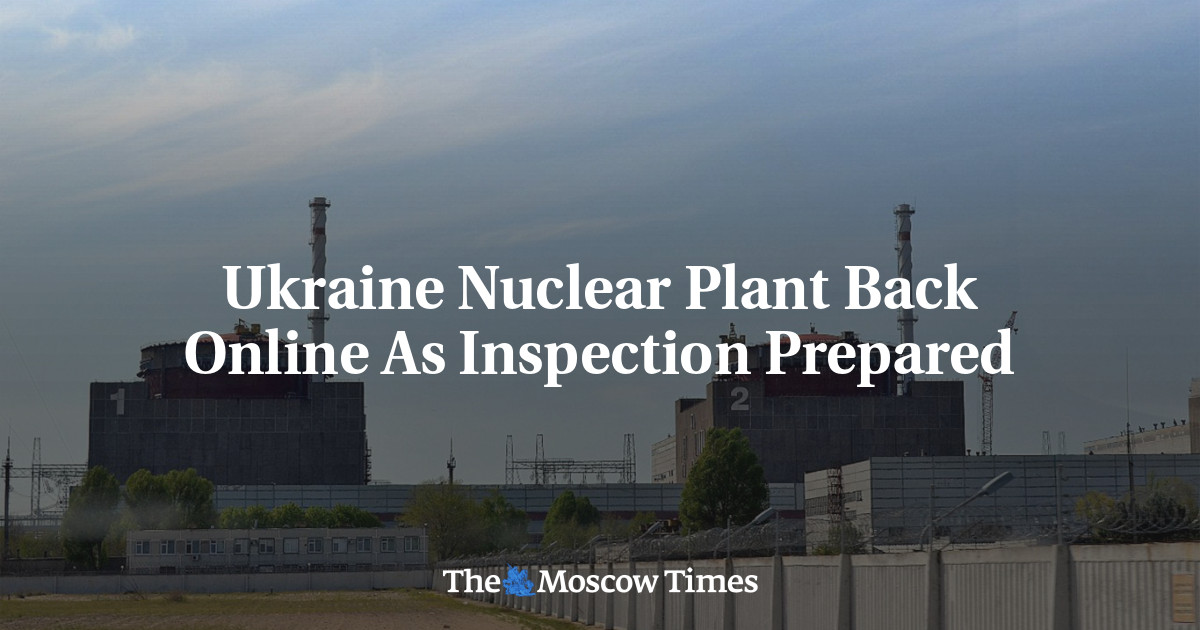 Ukraine’s Zaporizhzhia nuclear plant, occupied by Moscow’s troops, came back online Friday, the state operator said after Kyiv claimed it was cut from the national power grid by Russian shelling.

The plant — Europe’s largest nuclear facility — was severed Thursday from Ukraine’s power network for the first time in its four-decade history due to “actions of the invaders,” Energoatom said.

The operator said that as of 2:04 pm the plant “is connected to the grid and produces electricity for the needs of Ukraine” once again.

Ukrainian President Volodymyr Zelensky said his country’s nuclear experts had managed to protect the plant “from the worst case scenario which is constantly being provoked by Russian forces.”

But he added: “I want to underline that the situation remains very risky and dangerous.”

The Zaporizhzhia nuclear plant has been cause for mounting concern since Russian troops seized it in early March.

In recent weeks, Kyiv and Moscow have traded blame for rocket strikes around the facility in the southern Ukrainian city of Energodar.

Separately Friday, the EU presidency vowed to hold an emergency summit on the spiraling energy crisis caused by the war in Ukraine, which this week entered its seventh month.

The bloc has vowed to wean its 27 member states off Russian oil and gas in protest against the invasion, which has led to tough international sanctions against Moscow.

However, anxiety over supply has sent prices soaring, with Germany and France reporting Friday record electricity prices for 2023, more than 10 times higher than for this year.

Zelensky said late Thursday the power cut-off was caused by Russian shelling of the last active power line linking the plant to the network.

“Russia has put Ukrainians as well as all Europeans one step away from radiation disaster,” he said.

Energoatom said the outage was caused by ash pit fires at an adjacent thermal power plant, which damaged a line connecting the only two of the plant’s six reactors in operation.

Blaming Russian attacks for damage to the three other power lines linking the complex to the national grid, Energoatom said Friday afternoon one reactor had been reconnected “and capacity is being added.”

Ukraine energy minister adviser Lana Zerkal said an IAEA inspection “is planned for the next week.”

Zelensky said Friday that the team needs to get there as soon as possible “and help maintain the station under Ukrainian control on a permanent basis.”

Zerkal told Ukraine’s Radio NV late Thursday she was skeptical the mission would go ahead, despite Moscow’s formal agreement, as “they are artificially creating all the conditions so that the mission will not reach the site.”

Kyiv suspects Moscow intends to divert power from the Zaporizhzhia plant to the Crimean peninsula, annexed by Russian troops in 2014.

On Thursday, Washington warned against any such move.

In another development Friday, French energy firm TotalEnergies said it was divesting its stake in a Russian gas field following a media report that some of its fuel was ending up in Russian fighter jets.

The company said it had signed a deal Friday with its local Russian partner Novatek to sell its 49 percent in the Termokarstovoye gas field “on economic terms enabling TotalEnergies to recover the outstanding amounts invested in the field.”

It said the divestment had been agreed in July and Russian authorities gave the approval on August 25.

A day earlier, French daily Le Monde had reported the alleged refining of natural gas condensates from Termokarstovoye into jet fuel for fighter-bombers involved in Russia’s assault on Ukraine.

TotalEnergies is the only major Western energy group to continue its operations in Russia but chief executive Patrick Pouyanne said in March Russian gas fields exploited by the company’s joint ventures were vital for supplying energy to Europe.