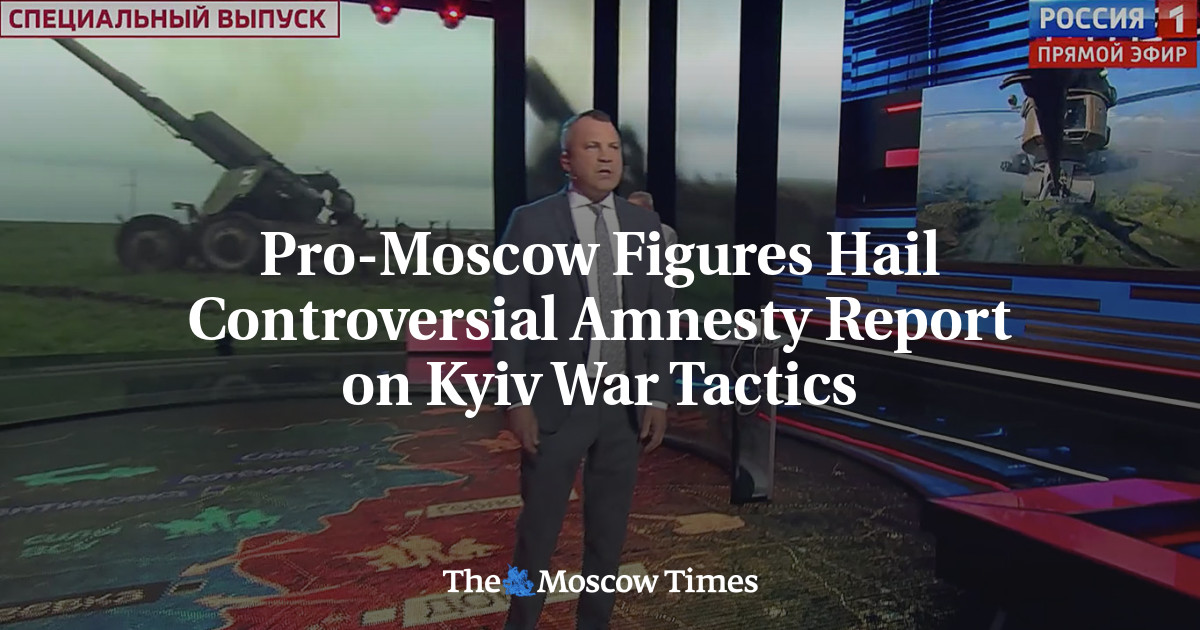 The U.K.-based rights body drew swift outrage from Ukrainian and Western observers with its report Thursday, which asserted that Kyiv was violating the laws of war by setting up military bases in and carrying out strikes from populated areas. Amnesty’s Ukrainian staff have said they disagreed with the report and that it was published despite their objections.

Russia, which has staged numerous attacks against civilian areas that have killed and injured thousands of Ukrainians, rejoiced at the report, saying it vindicates Moscow’s unsubstantiated claims that the attacks are in fact staged by Kyiv’s forces.

“It is becoming increasingly difficult to conceal the truth. The criminal Kyiv regime has no sympathy for its own population,” the Russian Embassy in Washington said Friday in a lengthy Telegram post about the Amnesty report.

On pro-Kremlin state television, presenter Yevgeny Popov blasted Amnesty while acknowledging that “even they” are starting to recognize crimes allegedly committed by Kyiv.

“Western analysts have started to suspect that hospitals and schools in Ukraine are not being used for their intended purposes,” Popov said during his primetime show on the Channel One broadcaster.

Russian forces have pushed to capture large swathes of territory in the east and south of the country since invading pro-Western Ukraine in late February.

Over 5,000 civilians have been killed and millions more driven from their homes, according to the latest figures from the UN human rights office.

Thursday’s report by Amnesty follows a wave of investigations by the organization that has concluded Russian forces’ guilt in war crimes in Ukraine, including bombing a theater full of sheltering civilians in the southern Ukrainian city of Mariupol in March.

The latest report also notes that Kyiv’s violations “in no way justify” Russian attacks that have killed and injured civilians in cities like Vinnytsia and Kremenchuk.

Despite these claims, pro-Moscow figures have continuously pointed the finger at Kyiv for being behind civilian casualties, an accusation bolstered by Thursday’s report.

“According to Amnesty International, the Armed Forces of Ukraine are doing what we have been talking about for so long,” popular Russian military blogger Ribar wrote on Telegram.

Amnesty has come under intense criticism from Kyiv over the report, with Ukrainian President Volodomyr Zelensky accusing it of victim-blaming and creating conditions to justify Russian aggression.

“There cannot be — even hypothetically — any condition under which any Russian attack on Ukraine becomes justified,” Zelensky said late Thursday.

Amnesty head Callamard hit back at the criticisms, maintaining that the report stays true to the organization’s impartiality.

“Ukrainian and Russian social media mobs and trolls: they are all at it today attacking Amnesty investigations. This is called war propaganda, disinformation, misinformation. This [won’t] dent our impartiality and [won’t] change the facts,” she tweeted.

“This won’t stop me from saying that its report distorts reality, draws false moral equivalence between the aggressor and the victim, and boosts Russia’s disinformation efforts. This is fake ‘neutrality,’ not truthfulness,” he tweeted in response to Callamard.