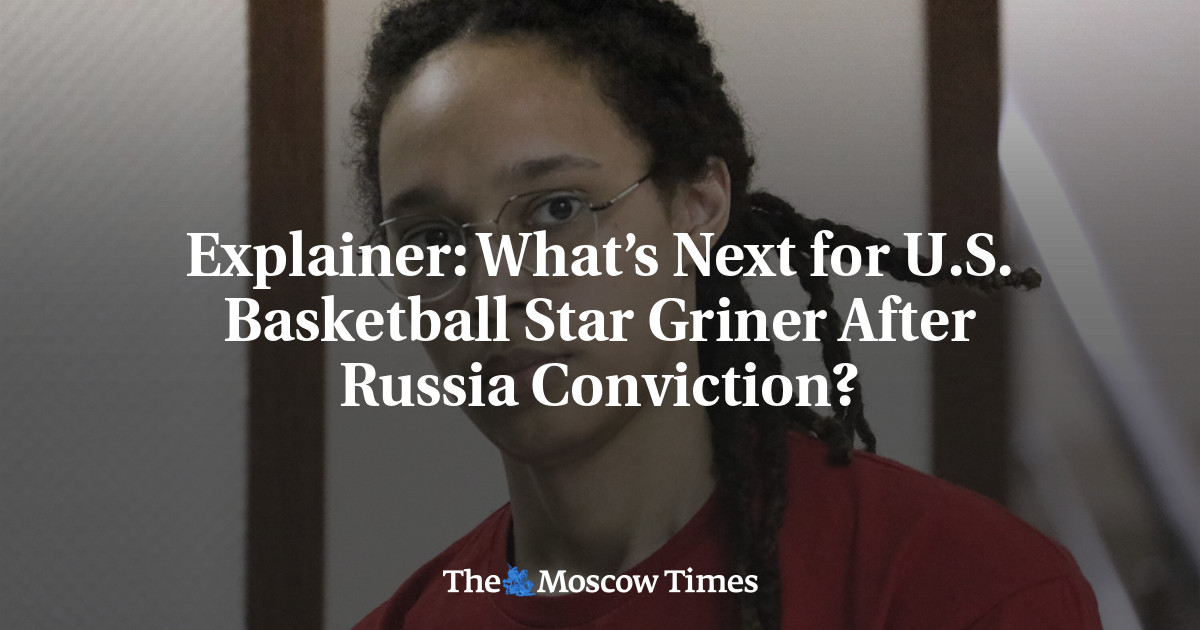 Griner, 31, was arrested on Feb. 17 after officers at Moscow’s Sheremetyevo Airport found cannabis vape cartridges in her luggage. The two-time Olympic champion was on her way to the city of Yekaterinburg, near Russia’s Ural mountains, where she has played for the local women’s team since 2014.

Since the start of the Russian invasion of Ukraine — which was launched a week after her arrest — Griner’s case has added to historic tensions between Moscow and Washington.

The U.S. has said Griner was wrongfully detained and has vowed to secure her release. Washington revealed last month it had proposed a prisoner swap to Russia in which the basketball player and imprisoned former U.S. Marine Paul Whelan would be exchanged for convicted arms dealer Viktor Bout, who is currently in a U.S. prison.

Here is what we know about the high-profile case and the potential prisoner swap.

Does Griner have any legal options left?

Griner’s legal team said Thursday that it will appeal the ruling made by a court in the town of Khimki outside Moscow.

“We need to use every legal opportunity that we have, and appeal is one of these opportunities,” People magazine quoted Griner’s lawyer Maria Blagovolina as saying hours after judge Anna Sotnikova announced the verdict.

The basketball star’s defense lawyers said the punishment of nine years — one year less than the maximum possible sentence — goes against the usual practice in Russia, where similar offenses are routinely punished by about five years in prison.

While Griner’s lawyers have 10 days from the time the verdict was announced to file the appeal, its subsequent review could take several months.

What about a prisoner exchange?

U.S. Secretary of State Antony Blinken announced last week that the U.S. had made a “substantial proposal” to Moscow “weeks ago” in an effort to free Griner and imprisoned former U.S. Marine Paul Whelan.

Blinken subsequently held a phone conversation with his Russian counterpart Sergei Lavrov, though there was no breakthrough. However, following Griner’s conviction Thursday, the Russian government announced its readiness to move forward with negotiations.

“We are ready to discuss this subject, but only within the framework of the [communication] channel established by presidents Putin and Biden,” Lavrov said Friday.

Though neither side has confirmed the names of those to be swapped, CNN reported last month that “people briefed on the matter” identified Russian arms dealer Bout as who the U.S was offering for exchange.

Who is Viktor Bout?

A 55-year-old arms trafficker, Bout is currently serving a 25-year sentence in a prison in Illinois. Often dubbed the “Merchant of Death” for being one of the world’s most notorious arms smugglers, he is believed to have aided both rebels and internationally recognized governments in an array of conflict zones, including in Afghanistan, Yemen and the Democratic Republic of the Congo.

Bout was arrested in 2008 in Thailand as part of an operation carried out jointly by the Thai police, the U.S. and Interpol. He was extradited to the U.S. two years later and convicted of conspiring to kill Americans, supplying anti-aircraft missiles and aiding a terrorist organization.

Why does Bout matter to Russia?

Russian authorities tried to block Bout’s 2010 extradition to the U.S., according to U.S. Embassy cables published by WikiLeaks.

“He clearly was very important. And it’s my understanding that President [Vladimir] Putin himself was involved in trying to get him home,” retired U.S. Drug Enforcement Agency official Rob Zachariasiewicz told ABC News last week.

There has been much speculation about Bout’s links to Russia’s intelligence services, though this has never been proven.

How likely is the swap?

While some believe that a prisoner swap between Russia and the U.S. could be executed within weeks, Jeff Hawn, a non-resident fellow at the New Lines Institute for Strategy and Policy in Washington, said it could take much longer.

“Hopefully it can be concluded in weeks but realistically there is a good chance it might drag on for months and possibly even years,” Hawn told The Moscow Times.

While the Justice Department is unlikely to block the exchange because Bout has already served “a good portion of the sentence,” diplomats’ attempts on both sides to “maximize the value” of the deal could cause delays, according to Hawn.

“Either Russia or the U.S. might see the willingness of the other to exchange as the opportunity to increase their demands and that would set the negotiations back to zero.”