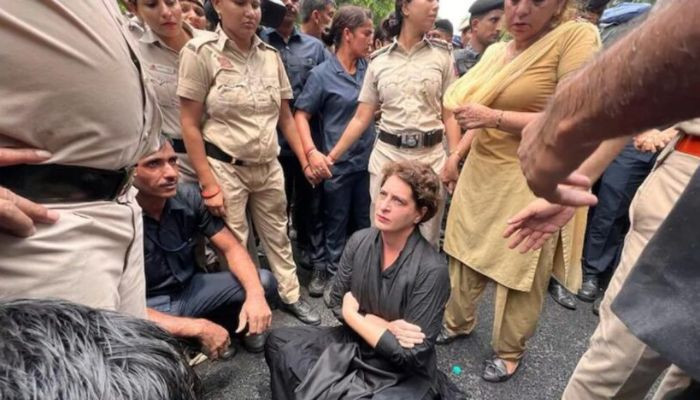 
The Congress Party in India is holding protests across the country over inflation and rising unemployment, Indian media reported.

Times of India reported that several Congress leaders stepped out wearing black shirts, kurtas, and bands on their sleeves to mark their protests.

NDTV quoted Rahul Gandhi as saying that the country was witnessing the death of democracy. He added that India was now a dictatorship.

“Anybody who stands against this idea of onset of dictatorship is viciously attacked, jailed, arrested and beaten up,” Rahul Gandhi, who has served as president of the party, said.

Members of the Indian National Congress such as Shashi Tharoor along with Rahul and Priyanka Gandhi were detained in New Delhi.

Congress leaders staged protests in the capital cities of all the states. Inside the Lok Sabha, Congress MPs along with some members from other opposition parties staged a noisy protest on Friday.

Many party leaders were also detained in Mumbai while they were marching to Raj Bhavan, the residence of Governor B S Koshyari to protest.

Maharashtra Congress chief Nana Patole said that the police was under pressure. He added that they were simply going to Raj Bhavan to “protest against the Union government and the BJP” and the rising unemployment was due to increased GST.

Party leaders and workers said that they were afraid the country was being led to “a Sri Lanka-like crisis”.

After six hours of their arrest, congress leaders, including 65 MPs were released.

NDTV reported that the protests were planned and the party had announced them several days ago but the police had not given them permission.