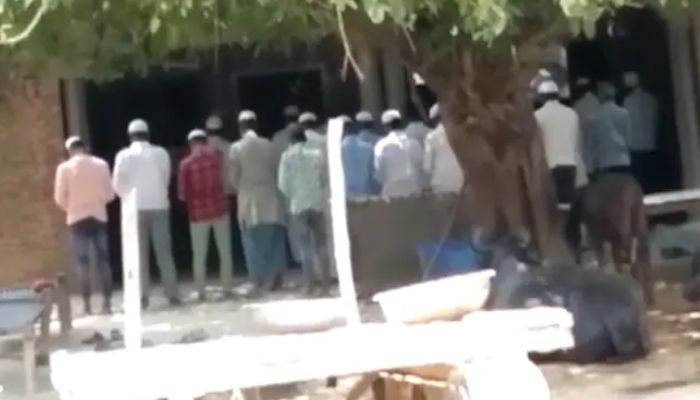 LUCKNOW: A police case has been registered against a group of Muslims in India’s Uttar Pradesh for a “mass gathering” to offer prayers at their house “without prior permission”, reported NDTV.

Dulhepur village, where the incident occurred, does not have a mosque which is why a group of Muslims gathered to offer prayers.

Some villagers have reservations against gatherings for namaz even if Muslims do it privately.

The FIR was registered on the basis of “objections from neighbours” and stated that the gatherings for namaz were spreading hatred among people.

A total of 26 people were arrested under the Indian Penal Code’s Section 505-2, which is supposed to be for hostile statements made in a religious gathering.

All Muslims were reported to be locals, out of which 16 have been named.

Photos and videos of people praying in the village have gone viral on social media, to which internet users have reacted with rage and disappointment.

Many have pointed out the bias of the villagers and their lack of rationality.

“This is what criminalisation of an entire religion looks like,” said journalist Kaushik Raj.

“I am sure if one of the neighbours had a hawan with 26 friends and relatives that would be acceptable,” Omar Abdullah, former chief minister of Jammu and Kashmir, said on Twitter adding that the problem was not the “mass gathering” but namaz itself.

“This is discriminatory,” said an internet user and others called it “Islamophobia.”