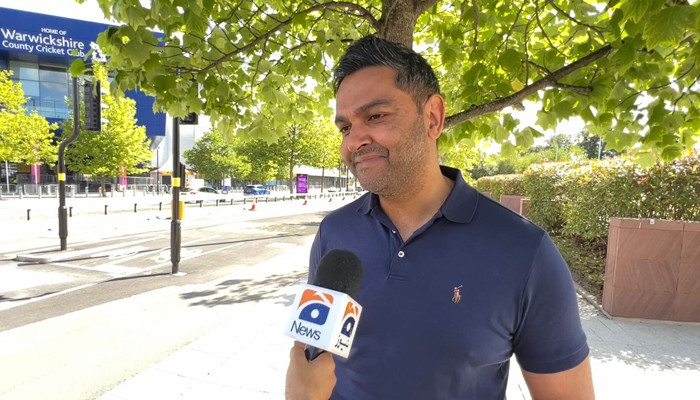 BIRMINGHAM : Former Chief Executive Officer of Pakistan Cricket Board Wasim Khan has criticised the lack of support provided to Pakistani athletes at the recently concluded Commonwealth Games in Birmingham and called on the Pakistan Olympic Association to provide support to them going forward.

“Pakistan Olympic Association should take care of these matters and support them as they are some of the prime athletes of Pakistan who are competing at the global level. How can you produce world class athletes if the funding to provide facilities is not there for them?” he asked in exasperation.

Birmingham-born Wasim Khan, who served as the CEO of PCB from 2019-2021, was speaking exclusively with Geo News before leaving for Dubai, UAE, where he’s currently serving as General Manager Cricket at International Cricket Council (ICC).

He is now responsible for looking after all of men’s and women’s international cricket, finalising future tour programmes, overseeing match officials programmes, setting high standards for performances and working on developing strategies.

He praised the efforts of Pakistani athletes, especially gold medal winners Arshad Nadeem in Javelin Throw and Nooh Dastgir Butt in weightlifting, and regretted that most of the medal winners self funded their pre-games training and preparations.

“The self funding of athletes is absolutely wrong as it doesn’t happen anywhere else in the world. If these athletes are funding themselves then obviously they will be forced to cut across things like nutritional health or physical fitness. When the athletes think they have to do all of these things for themselves, they will definitely make compromises on a few things to save money,” he said.

“Australians fulfilled their commitments and stayed in Pakistan for two months. The feedback which came from ACB to ECB and New Zealand Cricket Board was very positive. Aussie players really enjoyed their time in Pakistan,” he said.

Wasim said that he’s extremely hopeful that by holding more and more international matches in Pakistan, international cricket in Pakistan will fully recover “and there’s no reason for any team not to come to Pakistan”.

Wasim termed the cancellation of England and New Zealand’s tours as a “personal disappointment” for not just him but for the whole of Pakistan.

“I was extremely disappointed at that time, not only for me but also for the whole of Pakistan as Pakistan Cricket Board had put in a lot of hard work to arrange the tour. But after Australia’s tour of Pakistan earlier this year, both England and New Zealand have no reason not to go to Pakistan,” he said.

For Wasim, bringing back Test cricket to Pakistan was the biggest challenge when he was serving as CEO of PCB.

“White ball international cricket was happening in Pakistan, teams like West Indies and Zimbabwe toured Pakistan, but they were paid for those tours. Getting Test cricket back was the pinnacle [of achievements] for the country,” he said.

Wasim told Geo News that not only he, many others who were running cricket affairs before him, including former PCB chairman Najam Sethi, played their part in terms of getting international cricket back in Pakistan.

Speaking about the restoration of India-Pakistan bilateral cricket ties,  Wasim said that he’s hopeful that one day cricketing relations will resume between both nations but unfortunately “it won’t be possible in the near future”.

“Cricket boards of both Pakistan and India have good working relationships. The real issue is with the governments of both countries. Even when I was taking care of PCB’s affairs, I had very good relations with colleagues from BCCI. But these matters are controlled from outside the cricket boards by the respective governments,” the former PCB CEO said.

Inclusion of cricket at the next Olympics

Khan was visiting Birmingham to participate in the Annual General Meeting of the ICC which also coincided with the Commonwealth Games where women T20 cricket was part of the games for the first time.

Members of the organising committee of Los Angeles Olympics LA 28 were also visiting the city at the same time, as talks were held on the sidelines of the commonwealth games for the possible inclusion of cricket in the 2028 Olympics games.

Wasim told Geo News that the ICC has submitted plans to the LA28 committee and the outcome of those plans is expected by the middle of next year.

“We do stand a chance and ICC is leading this process. There are 3-4 other sports we are competing against for inclusion in 2028 Olympic Games,” he said.

“South Asia is a big market in terms of viewership and commerciality of the sport so it will be hugely beneficial for Olympics organising committee. So far they have expressed positive intentions and they seem keen to make cricket part of the Olympic Games” he added.

In his new role as GM Cricket, the biggest challenge for Wasim is to keep a balance between the future tours programme (FTP), bilateral cricket and ICC events. The T20 leagues are springing up like mushrooms around the globe and ICC is facing criticism from cricket fans for not handling the situation. But in Wasim’s opinion, the situation is not as bad as it might get during the next cycle of FTP.

“In FTP, member cricket boards finalise the bilateral cricket and ICC only facilitates them. When you take a look at the upcoming future tours programme, there is actually more bilateral cricket happening in the next cycle. But the bigger challenge will be faced in the following cycle of FTP where we will have to make sure that domestic T20 league doesn’t take over everything else,” he explained.

“The major chuck of FTP is based on bilateral cricket which is between countries to arrange. ICC’s role is merely to facilitate those conversations; to finalise the FTP, that’s mainly the responsibility of the relevant cricket boards.”

In the next cycle of ICC’s FTP, Pakistan is only playing 27 Test matches which is even less than what Bangladesh and New Zealand have got in the same time period.

“Since Pakistan is not playing any bilateral cricket against India, there are issues of sustainability, so for PCB it’s hard to keep the balance between various formats. In my opinion, it is the right balance at the moment,” he added.

Responding to a question about the ongoing debate on the future of one day international cricket, Wasim told Geo News that although there’s no immediate threat to this format of the game, the final decision in the fate of ODI cricket lies with the ICC’s member nations.

“When ICC speaks to the member boards on this issue, they express their willingness to continue playing ODI cricket. In the next cycle of FTP, we have ODI world cups scheduled. So we will see what happens post 2027 when the upcoming cycle of cricket ends,” he said.

Wasim Khan, who was born and brought up in Small Heath, an area of inner city Birmingham, advised the British Pakistani/Kashmiri youth to have ambitions in life and aspirations to fulfil them.

“I had no privileges but only through hard work and a vision in life I’ve now reached at this stage in life where I’m the GM Cricket at ICC and for that I’m always grateful to Allah. So my message to the youth is if I can do it, anybody can do it,” he said.