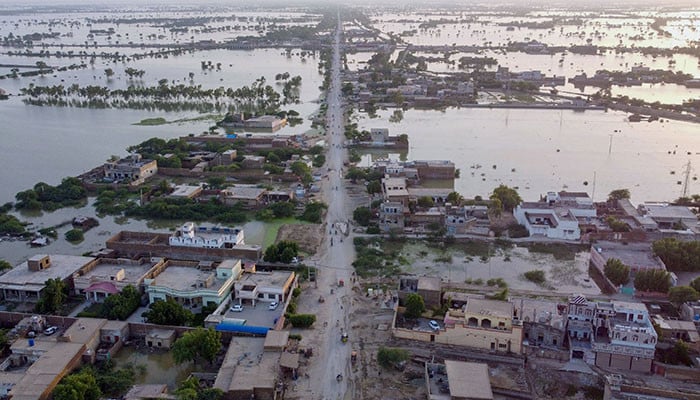 LONDON: While Pakistanis count the cost of one of the country’s worst recorded floods, heavy rain is hitting southwestern China as the Texas city of Dallas recovers from a 10-inch deluge in a single day last month.

Each of these rain-fuelled disasters followed a heatwave, suggesting the regions have been swinging wildly between two contradictory extremes. But extreme heat and extreme rainfall are closely related — and being gassed-up by climate change, scientists say.

Sweltering spring temperatures in South Asia, topping 50 degrees Celsius, are likely to have warmed the Indian Ocean. That warm water would then have fuelled what the UN Secretary-General Antonio Guterres this week called “a monsoon on steroids” over Pakistan — dumping more than three times as much rain as the 30-year average for August and inundating a third of the country.

More than 1,100 people have been killed, crops are ruined, and homes destroyed, prompting urgent pleas for aid.

It will take weeks if not months to determine exactly how much of a role climate change may have played in this year’s floods, but scientists agree it is supercharging extremes. Heatwaves are already more frequent and intense worldwide, increasing evaporation from both the land and the ocean. Because a warmer atmosphere can also hold more moisture, the water vapor builds until clouds eventually break and send down heavier rain.

“The same places can be expected to experience both flooding and drought in a hotter climate,” said climate scientist Deepti Singh at Washington State University.

The area around Dallas had been bone dry for three months, with more than half of Texas suffering extreme drought. Cotton crops withered in the fields. Ranchers were forced to kill off much of their cattle for lack of feed. Soils hardened and cracked, forming a parched checker-board across the landscape — the perfect setup for flash flooding.

It eventually rained on Aug. 21, dropping nearly 10 inches within 24 hours, but the ground was too hard to absorb the deluge, leaving much of the water to flow through the city. Interstate traffic came to a halt. Flights were cancelled. And apartments in the historic area of Old East Dallas were swamped.

In a drought-stricken area, “the ground can almost act like concrete in an urban environment”, said climate scientist Liz Stephens at the University of Reading in Britain.

Unlike flooding that comes from rivers gradually overflowing their banks, flash floods are triggered by intense rain in a short period — usually less than six hours — giving little warning before the water swells into a raging torrent. In an urban population centre, they pose the most risk. But flash floods also often rip through desert canyons in Utah and Arizona, threatening hikers.

There have been four other major flash floods in the United States since July — in Kentucky, eastern Illinois, California’s Death Valley and the Missouri city of St. Louis. Each saw enough rain to be considered a once-in-1,000-years event, according to historical trends.

It’s unclear how far that frequency will increase as the world continues warming.

Hit over the summer by its worst heatwave in six decades, China’s drought-stricken Yangtze River Basin is struggling with both power and water shortages. Desperate for rain, some provinces within the basin have begun “seeding” clouds, sending planes into the sky to release the chemical silver iodide to cause the clouds to break.

But as late summer rains arrive now, officials are worried about having too much water. More than 119,000 people have been evacuated from flood-risk areas of southwestern China, according to state media.

The Ministry of Emergency Management warned on Monday that parts of China were “alternating between drought and flood” and urged vigilance this week in monitoring dried-up riverbeds being inundated by intense rain. The ministry also asked that local authorities store rainwater, to potentially help relieve other drought-stricken areas of the country.

Weather events across the northern hemisphere can also be connected by the polar jet stream, a fast-flowing air current that moves weather systems from one part of the world to another.

But scientists have found that warming trends along with recent disturbances in air circulation may be increasing the chances of simultaneous extremes.

The jet stream disturbance is still a topic of intense research. But one recent study suggested that these factors combined have made it seven times more likely for heatwaves to be occurring simultaneously in the northern hemisphere than 40 years ago, according to the research published in January in the Journal of Climate.

“The warming trend is the main driver behind the increase in concurrent heatwaves,” said climate scientist Kai Kornhuber at Columbia University in New York, who was part of a team including Singh that worked on the study.

But there is evidence, including the research around the jet stream, “to believe that atmospheric dynamics have contributed to this increasing trend”.