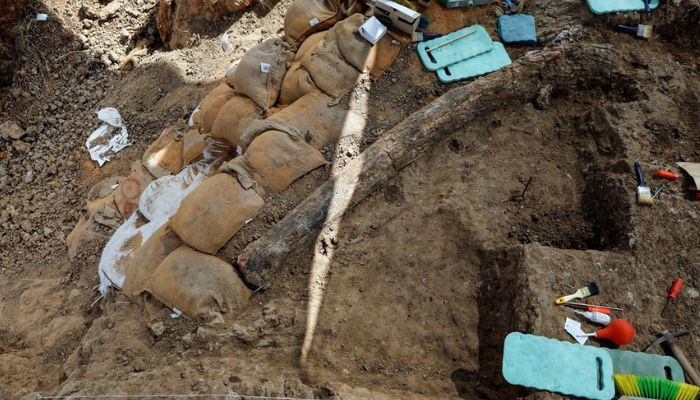 JERUSALEM: A fossilised tusk from a giant prehistoric elephant that once roamed around the Mediterranean has emerged from an excavation site in southern Israel, offering what archaeologists said was a rare insight into the life of early inhabitants of the area.

The 2.5 metre-long tusk from the ancient straight-tusked elephant (Palaeoloxodon antiquus) is estimated to be around half a million years old and was found in an area where stone and flint tools and other animal remains have been recovered.

“This is the largest complete fossil tusk ever found at a prehistoric site in Israel or the Near East,” Israel Antiquities Authority prehistorian Avi Levy, the director of the excavation, said in a statement.

The now-extinct species, much larger than African elephants, was part of the rich fauna of the area, including wild cattle and horses, deer, wild boars and hippopotamuses and was hunted by humans for food and possibly for symbolic purposes.

“We anticipate that the discovery of the new tusk in a clear archaeological context will shed light on this issue,” said Dr Omry Barzilai from the Israel Antiquities Authority.

Once the conservation process is complete, the tusk will be displayed at a permanent exhibition hall in the National Campus for the Archaeology of Israel in Jerusalem.