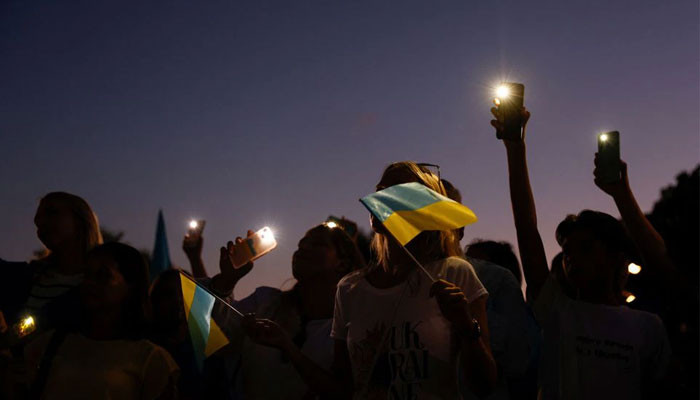 KYIV: Ukraine was “reborn” when Russia invaded six months ago, President Volodymyr Zelenskiy said on Wednesday, marking 31 years of his country’s independence from the Moscow-controlled Soviet Union with a vow to drive Russian forces out completely.

After days of warnings that Moscow could use the anniversary of Ukraine’s Independence Day to launch more missile attacks on major cities, Kyiv was unusually quiet and the second biggest city Kharkiv was under curfew after months of bombardment.

The anniversary fell exactly six months after Russia sent tens of thousands of troops into Ukraine.

In an emotional speech to his compatriots, Zelenskiy said the attack had revived the nation’s spirit.

“A new nation appeared in the world on Feb. 24 at 4 in the morning. It was not born, but reborn. A nation that did not cry, scream or take fright. One that did not flee. Did not give up. And did not forget,” he said.

The 44-year-old leader, speaking in front of Kyiv’s central monument to independence in his trademark combat fatigues, vowed to recapture occupied areas of eastern Ukraine as well as the Crimean peninsula, which was annexed by Russia in 2014.

“What for us is the end of the war? We used to say: peace. Now we say: victory,” he said, days after his government laid out the hulks of burnt-out Russian tanks and armoured vehicles in central Kyiv in a show of defiance.

Russia’s war effort in Ukraine has made little progress in recent months, after its troops were pushed back from Kyiv in the early weeks of the war.

Russian Defence Minister Sergei Shoigu told a meeting of defence ministers in Uzbekistan that Russia had deliberately slowed down what it refers to as its “special military operation” in Ukraine to avoid civilian casualties.

On Tuesday evening, Zelenskiy warned of the possibility of “repugnant Russian provocations”.

“We are fighting against the most terrible threat to our statehood and also at a time when we have achieved the greatest level of national unity,” Zelenskiy said.

“Russian occupiers continue to carry out air and missile attacks on civilian objects on the territory of Ukraine. Do not ignore air raid signals,” the General Staff said in a statement on Wednesday.

Zelenskiy told representatives of about 60 countries and international organisations attending a virtual summit on Crimea on Tuesday that Ukraine would drive Russian forces out of the peninsula by any means necessary, without consulting other countries beforehand.

The war has killed thousands of civilians, forced more than a third of Ukraine’s 41 million people from their homes, left cities in ruins, and shaken the global economy. It is largely at a standstill with no immediate prospect of peace talks.

As well as Crimea, Russian forces have seized areas of the south including the Black Sea and Sea of Azov coasts, and chunks of the eastern Donbas region comprising the provinces of Luhansk and Donetsk.

Almost 9,000 Ukrainian military personnel have been killed in the war, its military said this week.

Russia has not publicised its losses but US intelligence estimates 15,000 killed in what Moscow describes as an operation necessitated by threats to its security. Kyiv says the invasion is an unprovoked act of imperial aggression.

Officials installed by Moscow in areas under its control have also been killed. The latest was the head of the town of Mykhailivka in the Russian-controlled part of Zaporizhzhia region, who an official from the Russian-backed administration said had been killed by a car bomb. On Aug. 6 the deputy head of a town in neighbouring Kherson region was shot dead in his home.

Ukraine declared independence from the Soviet Union in August 1991 after a failed putsch in Moscow. An overwhelming majority of Ukrainians voted for independence in a referendum that December.

Both sides have accused the other of firing missiles and artillery dangerously close to the plant, Europe’s biggest, raising fears of a nuclear catastrophe.

Pro-Moscow forces took over the plant soon after the invasion began but Ukrainian technicians are still operating it. The United Nations has called for the area to be demilitarised.

Pope Frances called for “concrete steps” to end the conflict and avert nuclear disaster at the nuclear power plant.

Norway said it and Britain would jointly supply micro drones to help with reconnaissance and target identification.

The United States, which has sent $10.6 billion in security assistance to Ukraine, will announce a new package of about $3 billion as early as Wednesday, a US official said.

Advanced US missile systems appear to have helped Ukraine strike deep behind the front lines in recent months, taking out ammunition dumps and command posts.

In the latest mysterious fire at a Russian military facility, Russian officials said ammunition stored in southern Russia near the border with Ukraine spontaneously combusted on Tuesday.

“The five main causes of sudden explosions in Russia are: winter, spring, summer, autumn and smoking,” it said.