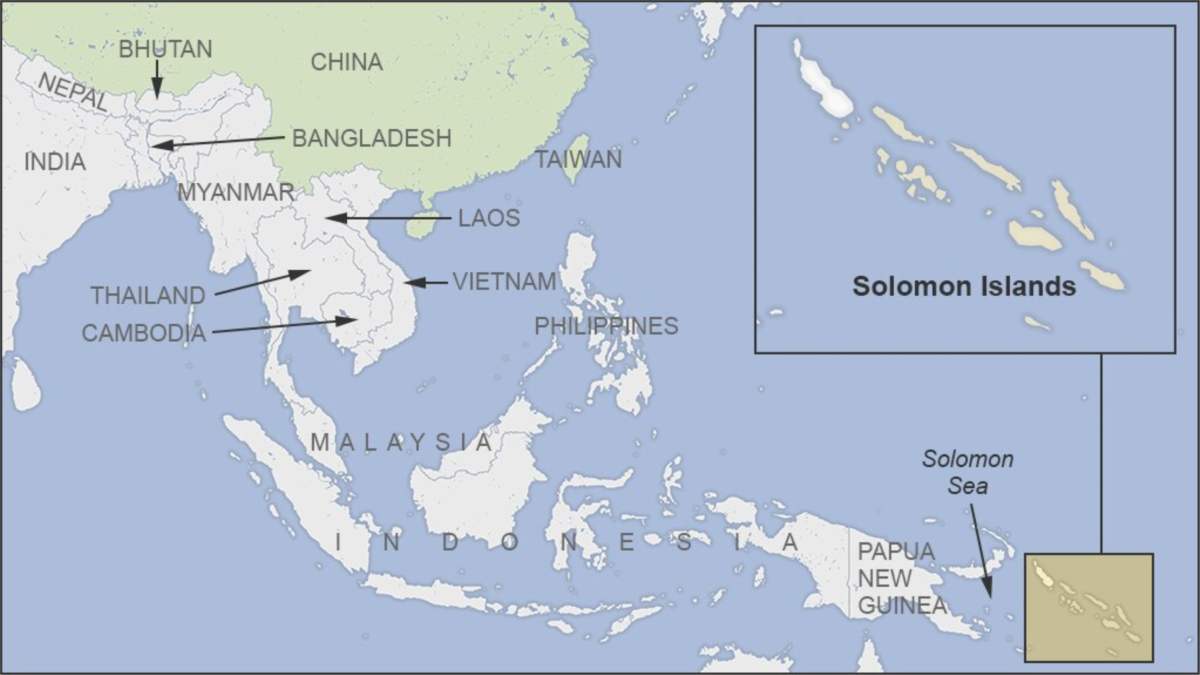 The U.S. received formal notification Monday that the Solomon Islands government has placed a moratorium on all naval visits while it updates its procedures, a U.S. State Department spokesperson told VOA.

“Clearly, we’ve seen the Chinese bully and coerce nations throughout the Indo-Pacific to do their bidding, and to serve what they believe their selfish national security interests are, rather than the broader interests of a free and open Indo-Pacific,” he said. “It’s regrettable. We call it out when we see it.”

The USCG cutter Oliver Henry diverted to Papua New Guinea to refuel and resupply, according to Coast Guard officials. SeaWaves tweeted on August 23 that the British ship, HMS Spey, was also “denied entry” to Solomon Islands.

According to Reuters, the British navy declined to comment on social media reports that “the patrol vessel, also taking part in Operation Island Chief to monitor for illegal fishing in the economic exclusion zones of Fiji, Papua New Guinea, Solomon Islands and Vanuatu, was declined port access by the Solomon Islands.”

The moratorium will not prevent the U.S. Navy Ship Mercy from beginning a two-week humanitarian mission in the Solomon Islands with Australian and Japanese partners because the Mercy, a hospital ship, received diplomatic clearance prior to the moratorium, according to the State Department spokesperson. Local media reports the Mercy will begin seeing patients on Tuesday, August 30.

Republican Senator Marsha Blackburn of Tennessee was visiting the Solomon Islands on August 24 and met with Prime Minister Manasseh Sogavare. On Monday, a source familiar with the visit said she “expressed her concern regarding the Coast Guard cutter while urging the Mercy be allowed to carry out its mission.”

VOA contacted the Solomon Islands mission to the United Nations for comment on the moratorium but did not receive a response.

In 2019, Sogavare aligned with China after cutting ties with Taiwan, a change that played out against China’s expansion in Pacific region. Secretary of State Antony Blinken visited the region in February and announced the U.S. Indo-Pacific Strategy to counter China’s influence. Earlier this month, the U.S. reopened its Solomon Island embassy.

Tension increased on March 24, when a New Zealand security researcher, Anna Powles of Massey University, leaked a draft security agreement between China and the Solomon Islands.

The draft said the pact would allow China to send armed forces to the Solomon Islands to protect Chinese investments there and Chinese warships would also be allowed to dock in the nation where anti-government riots in Honiara’s Chinatown left three dead in November 2021.

Officials from both countries denied that China would establish a military outpost 3,066 kilometers from Guam, a U.S. territory in the Pacific.

Despite the denials, the U.S. quickly voiced concern that China would eventually establish a naval base in the Solomon Islands.

“The broad nature of the security agreement leaves open the door for the deployment of PRC [People’s Republic of China] military forces to the Solomon Islands,” U.S. State Department spokesperson Ned Price said on April 18.

The signing of the pact “could increase destabilization within the Solomon Islands and will set a concerning precedent for the wider Pacific Island region,” he added.

The Solomon Islands occupies a strategic location that makes the nation a “transit point for a lot of cargo that moves throughout the south part of the Pacific,” Catherine Ebert-Gray, the former U.S. ambassador to Papua New Guinea, Solomon Islands and Vanuatu, told VOA Mandarin on April 17.

“It is also important to the navigation not only of those sea vessels, but of aircraft, many of which from Australia and New Zealand need to go through that territory to go north to Asia, or from the United States, to go to parts of the Pacific and parts of Asia.”

Sogavare told The Guardian on July 13, “I have said it before and I will say it again, that is not in someone’s interest, nor the interest of the region for any military base, to be established in any Pacific island country, let alone Solomon Islands.”