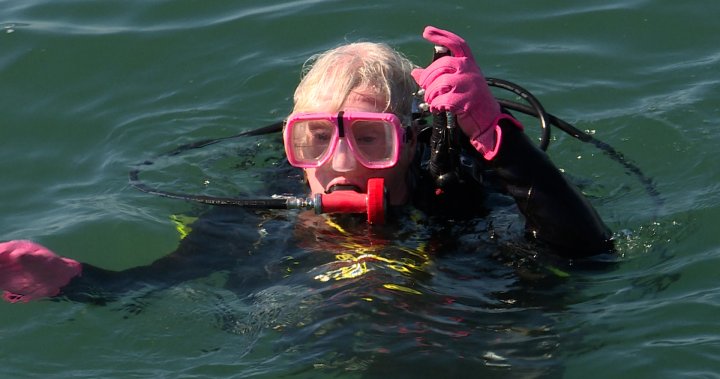 On a beautiful and sunny Sunday in Kingston, Ont., with many people enjoying the sun, a group of local divers strapped on their gear and hit the water in the name of sustainability.

At Gord Downie Pier the divers convened toting along their gear in preparation for a trash dive for Sustainable Kingston’s “Underwater Pitch-IN” event.

It was the first such event organized by Sustainable Kingston, but the second dive at this location this summer.

800 kilograms pulled from Lake Ontario during ‘Dive Against Debris’

Sustainble Kingston Chief Operating Officer Geoff Hendry said the divers approached them with the idea and they helped facilitate it.

“Microplastics in the water is a significant problem that’s growing. We definitely want to get these large items, but from a health and safety standpoint, getting rid of microplastics in Lake Ontario is something that we really need to embrace,” said Hendry.

Dive Master Jason Guindon, the ringleader for Sunday’s volunteer dive team, said that one of his favourite hobbies, shipwreck diving, has been sullied by finding trash at the beautiful and historic underwater sites.

Though he’s never participated in an organized trash dive, he will frequently grab whatever trash he can pocket while he’s diving recreationally.

“We’re down there because it’s peaceful and it’s serene and it’s supposed to be clean. So, when you’re down there and you see all this trash all over the shipwrecks that you came to have a look at, which is a historical part of Kingston, it’s unnerving for sure.”

After a quick debrief on diver safety, the group of volunteers jumped in one by one and began their descent.

It wasn’t long before they began pulling out debris, starting with a number of smaller items including bottles, cans and other garbage.

Over the course of three hours, they found a shopping cart, a folding chair, six bags of garbage and other items, including five tires.

The official weight wasn’t determined but Hendry said he considered the day to be a success.