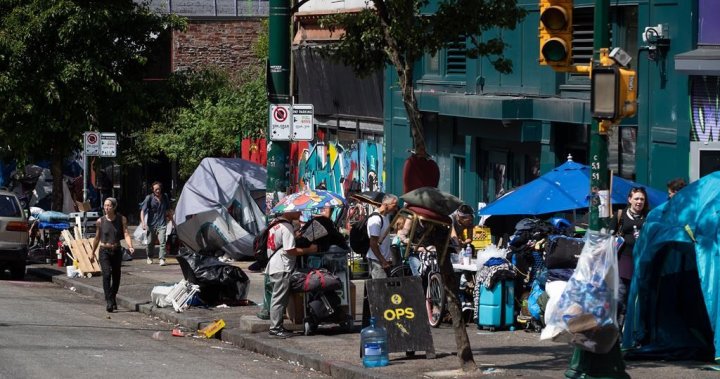 Vancouver Mayor Kennedy Stewart will be holding a press conference on Wednesday, Aug. 24, to give an update on the city’s efforts to remove structures in the Downtown Eastside.

The press conference is scheduled to begin at 10 a.m.

The controversial Hastings Street encampment has been a hotbed for discussion lately, with many concerns laid out by those living in the area, those experiencing homelessness, as well as the city and Vancouver Fire Rescue Services.

Since the beginning of the year, there have been more than 1,000 fires in the area causing damage.

On Monday, 59 people were forced out of their homes after a three-building fire one block from Downtown Eastside’s Oppenheimer Park.

Two of the buildings are single-room occupancy hotels.

Fire investigators said they believe the fire started when some garbage caught fire and spread before crews could get to it.

‘Where are we supposed to go?’ Downtown Eastside rally opposes tent city eviction

People experiencing homeless and advocates have been vocal about the efforts to remove structures incorporated into a tent city in the 100 block of East Hastings Street.

A large banner was previously hung in the area, stating, “Where are we supposed to go?” Speakers stood in front of the large banner, venting their frustrations.

“By displaying people sheltered on Hastings, the city is really sweeping the housing crisis under the rug,” Stop the Sweeps organizer Eli told the crowd.

“Instead of treating the root cause of the disease, they’re punishing the people who are suffering the symptoms.”