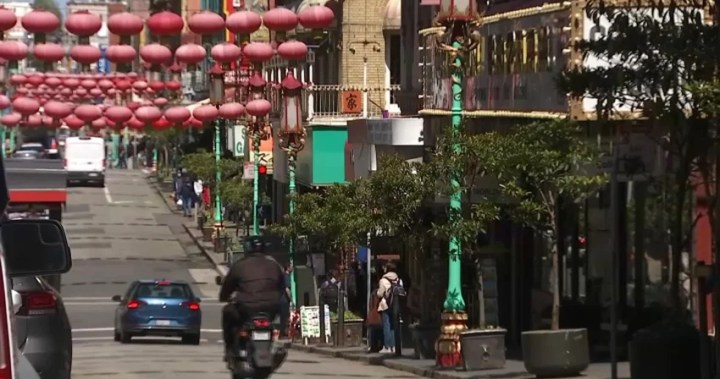 Through the COVID-19 pandemic, Vancouver’s Chinatown has seen an increase in violence, hate attacks and graffiti, along with street disorder from the neighbouring Downtown Eastside(DTES).

San Francisco’s Chinatown has successfully battled similar issues and a delegation from Vancouver will be touring the northern California city this week. They’ll examine what it’s doing to reform and revitalize its historic Asian neighbourhood.

From vandalism to anti-Asian hate crimes and stranger assaults, San Francisco’s Chinatown has experienced the same public safety threats that Vancouver has over the last two years.

“During the pandemic our Chinatown was decimated,” said Lily Ho with San Francisco’s Delta Chinatown Initiative in an interview with old Global News. “It was a ghost town.”

But there is new life inside the 24 blocks of the oldest Chinatown in North America.

Weekend street closures are facilitating regular festivals with lion dances, while the area is filled with lanterns. Murals are replacing graffiti in alleys and laneways.

“It doesn’t have that same sense of fear and danger or criminality, things that we’re hoping to bring back here to Vancouver,” Deputy Chief Const. Howard Chow with the Vancouver Police Department told Global News.

Chow will be joining a delegation of approximately one dozen VPD officers and local business and community leaders in the learning trip to San Francisco.

While it doesn’t have street disorder and human suffering at its doorstep like the city of Vancouver does with the DTES, San Francisco’s Chinatown is within walking distance of the Tenderloin, one of the city’s poorest and most drug-infested neighbourhoods.

“The difference is that they’ve learned to be able to co-exist together and I think that’s what needed here,” said Chow.

The VPD’s deputy chief constable believes San Francisco is faring better due to complete community investment in its Chinatown.

“Investment from different levels of government and from business leaders that want to see it thrive and prosper,” said Chow.

Ho said she started the Delta Chinatown Initiative in 2020 to combat anti-Asian hate and make Chinatown a safer place for people to visit and live, while also supporting the most vulnerable populations in SROs.

The non-profit group organized rallies and town halls to bring awareness to the rise in anti-Asian hate crimes and secured funding to have surveillance cameras installed along busy Grant Avenue, and in areas with high vandalism and violence.

“I wish we didn’t have to stay in the fight,” said Ho. “I wish there was nothing to fight but while it’s here, we don’t want people to forget that this is still a problem.”

As things return to normal after COVID, Ho said volunteers won’t stop defending Chinatown because the safety and wellbeing of residents, businesses and visitors is critical to economic revitalization.

“Our elders are still not safe walking down the street,” said Ho.

Merchants donate $8,800 to beloved Chinatown security guard who was attacked

While its recovery is a work in progress, Vancouver delegates are hoping they can borrow from San Francisco’s model to boost public safety measures and help businesses struggling to survive in the city’s Chinatown.

The four-day trip is largely funded by the non-profit Vancouver Police Foundation, which supports programs that fall outside of the VPD’s regular city operating budget.