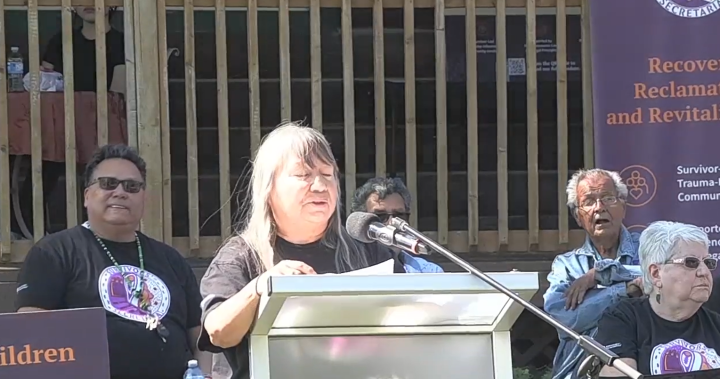 The group tasked with a research initiative investigating the Mohawk Institute Residential School in Branford, Ont., says the number of deaths recorded in a search so far is more than double the number originally identified by the National Centre on Truth and Reconciliation (NCTR).

The Survivors’ Secretariat, overseeing a police task force in a search for unmarked burials of Indigenous children on over 600 acres of land, revealed records of 97 deaths connected with the Institute during a year of review open house Wednesday.

Board of director member Sherlene Bomberry said that coupled with historical research from firm Know History, the secretariat also identified 4,581 names of children who attended the institute and 725 names of people who worked there.

“The secretariat is currently in the process of cross-referencing names to ensure there are no duplicates,” Bomberry said.

“We are working to determine proper practical protocols to inform families and communities prior to releasing the list of names and document sources on our website.”

As of late August, ground penetrating radar (GPR) has covered only about 1.5 per cent of the total area to be searched in southeast Brantford, according to Bomberry.

The Mohawk Institute opened in 1828 and was relocated to Brantford in 1840 before being destroyed by two separate fires in 1858 and 1903. After the last rebuild, the federal government took responsibility for the school in 1945 before its closure in 1970 with some children still in the residence until 1971.


Beth Solis from Know History says researchers identified close to 12,000 relevant documents in about 23 different institutions in nine months of research, and have been reaching out to relevant institutions to negotiate access to records on behalf of the secretariat.

“It can be things from photographs, to diaries, to annual reports,” Solis said.

“There’s quite a variety of documents and records that we’re looking for, and to date, we’ve reviewed more than 6,700 documents that have all been logged and organized within an internal database.”

About $10.4 million in funding from the federal government and $1.3 million over three years from the province of Ontario have been contributed to research efforts to date.

The secretariat has suggested that money cover approximately a third of what’s needed for a ground search and review hundreds of thousands of documents.

Executive lead Laura Arndt told members the fall search is set to get underway and is expected to be “busy.”

“I think the most important part about the GPR and ground search work is that I want people to understand we shouldn’t be protecting our children from it,” Arndt said.

“We should be engaging our children in the conversation because this is their history, this is their journey, and they get to join with survivors in finding truth.”