By AdminSeptember 6, 2022No Comments4 Mins Read 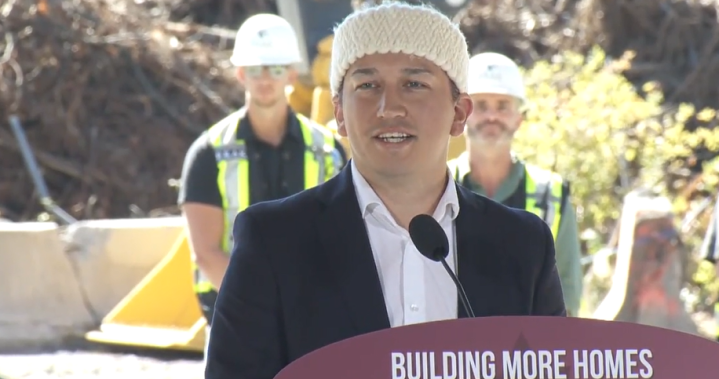 The Sen̓áḵw development will be built on 10.5 acres of land reclaimed by the Squamish Nation, in what is now broadly known as Vancouver’s Kitsilano neighbourhood.

When completed, the complex will include some 11 towers, 6,000 rental units and 1,200 homes, generating an estimated long-term return of more than $10 billion to the nation.

“While we were displaced, we fought hard to reclaim Sen̓áḵw, and now it will once again provide for our people and for the future of the Sḵwx̱wú7mesh peoples,” said Coun. Sxwíxwtn Wilson Williams.

​”As weeks have passed, the clearing of our village here is looking brighter and the vision that is coming forward is lighter as well.”

The ground-breaking ceremony was attended by Sḵwx̱wú7mesh elders, leaders, witnesses, and descendants of those who inhabited the original Sen̓áḵw village. Prime Minister Justin Trudeau also participated, along with several federal and provincial cabinet ministers, MPs and MLAs.

“We followed the by-Indigenous, for-Indigenous principle,” said federal Housing Minister Ahmed Hussein. “It took time but we knew that the journey was worth it. Projects like this remind us that reconciliation is also reconcili-action.”

Westbank Projects Corp. is a partner in the Sen̓áḵw development, as is the federal government through a $1.4-billion loan guarantee.

Sen̓áḵw means “the place inside the head of False Creek,” and was a place where Sḵwx̱wú7mesh peoples from many villages would congregate, trade, hunt, forage medicine, and engage in ceremony.

Portions of reserve land around Sen̓áḵw were taken for settler development beginning in the 1880s, and in 1913, the B.C. government seized the entire village. Its residents were forcibly removed, “loaded up on a barge and towed across the inlet to other Squamish reserves,” according to the development website.

In the 1970s, Squamish leaders took the federal government to court for its return, and it was not until 2003, after settling out of court, that Ottawa returned just under 10.5 of the expropriated 80 acres.

“We as leaders in the generation we live in could not do the work that we have upon us if it wasn’t for the work of the previous generations who did the work for us to get to this point,” said Council Chairperson Khelsilem.

The nation hopes to break ground on Sen̓áḵw by the end of the year.

Trudeau was grilled Tuesday about housing affordability and when his government might give more land back to Indigenous nations. In response, he said “reconciliation can take many forms,” and cited his government’s renewed focus on an inclusive economy when MPs sit again in mid-September.

Ottawa aims to double housing construction in the next 10 years, he added, and is bolstering funds that encourage sustainable development, rent-to-own projects and rapid building at the municipal level.

Asked to respond to some public concerns about the level of density in the Sen̓áḵw proposal, the prime minister said he knows it’s a “good thing” for Vancouver.