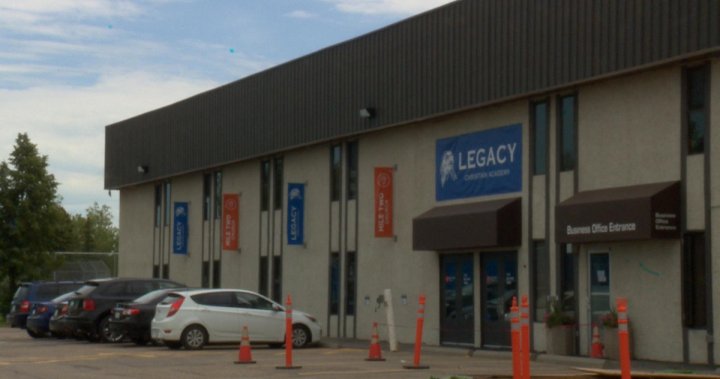 
The Saskatchewan NDP called on the provincial government to freeze funding for a private school in Saskatoon facing abuse claims from former students.

In May 2004, former student Coy Nolin who was a teenager at the time alleges he was kicked out of the school for being gay and had an exorcism performed on him, with school leaders praying with him and speaking in tongues.

“I don’t understand how someone could knowingly feel like that was something that would be the right thing to do to the child,” Nolin told Global News.

Nolin said he filed a complaint with Saskatoon police in July 2021 regarding the incident.

In one alleged incident, Hutchinson was in Grade 12 and the captain of the school’s volleyball team when she found out she and others were in trouble for whispering in church.

“We were yelled at for disrespecting the pastor, for making him look bad by talking in church,” Hutchinson told Global News.

Hutchinson alleges they were “paddled” one by one by a church official.

In the other alleged incident, Hutchinson said she was about eight years old when students were asked individually to say a morning prayer.

“When it came to my turn, I got so nervous. I had so much anxiety that I said no, and I refused to do it,” Hutchinson said.

“The teacher at the time seemed to think that that meant I had a demon, so she would keep me in at break times and rock me in her lap while she spoke in tongues, is what they called it,” Hutchinson said.

She said she remembers crying and wondering why she couldn’t go outside and play with her friends. She called the incident scary.

“It was an exorcism in the sense that she was trying to drive a demon out of me. I didn’t know what she was doing and I didn’t have any control over it,” Hutchinson recalled.

Hutchinson said she was told the teacher thought she was “demon possessed.”

Hutchinson’s parents told the teacher that wasn’t the case, that Hutchinson was shy and anxious and didn’t want to speak in front of class.

The LCA and Mile Two Church did not respond to an interview request from Global News and instead provided a statement.

“We are all heartbroken to learn the stories of some former students about their experiences from over 15 years ago. The current staff and leadership are hearing some of these stories for the first time, and we condemn any acts of abuse that previous leaders committed,” the statement read.

It added there has been “significant leadership and staff changes” over the last seven years.

“The people that are accused of these actions are no longer here or affiliated with us in any way,” the statement added.

The school and church said they will continue to encourage and support any former student who believes they were abused or assaulted to report it to police.

“While we can appreciate the desire for details regarding the situation, this remains an active investigation. In respecting that process, we are unable to offer you additional details at this time,” a police spokesperson said in an emailed statement.

A spokesperson with prosecutions said they do not comment on police investigations.

“In cases where police choose to seek an opinion from prosecutions related to an investigation, any advice provided is privileged communication,” an emailed statement read.

The statement added prosecutors assess all files on “whether there is a reasonable likelihood of conviction and whether it is in the public interest to proceed with a prosecution.”

The Saskatchewan education ministry said it was made aware of the police investigation regarding historical allegations from former students of Christian Centre Academy through a letter in June 2022.

“It is our understanding, based (on) the accounts contained in the letter, that these allegations are in regards to incidents that took place in the 2000s,” a ministry spokesperson said in an emailed statement.

The provincial government says it is committed to ensure all students feel safe, protected and respected within schools.

The ministry statement said in 2012 the province began funding qualified independent schools. who meet the standards and criteria outlined in provincial regulations, including Legacy Christian Academy.

“Since LCA began receiving provincial funding, no complaints have been registered with the ministry against LCA and no irregularities have been found during routine inspections,” the ministry statement added.

The ministry says QIS are visited and monitored with teachers being supervised a minimum of three times per school year.

“Outwardly anti-LGBTQ2S+ sentiments and violent discipline have no place in our schools,” Beck said.

“It’s frankly unacceptable that the Sask. Party feigned ignorance about the alleged culture of abuse at Legacy Christian Academy despite having received shocking complaints from former students. The government should have immediately launched an investigation knowing that the safety and wellbeing of students could be compromised.”

The opposition is calling for an independent investigation into the alleged abuse at Legacy Christian Academy and for the government to freeze funding to the school as well as “bolster the oversight” of Qualified Independent Schools.