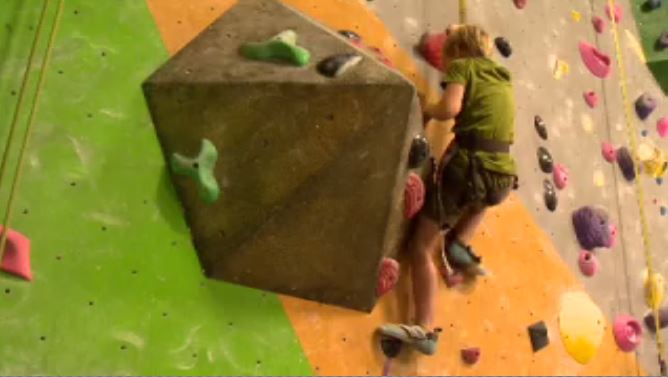 Regina youth who have experienced sight loss were given the opportunity on Thursday to learn how to rock climb at the Regina Climbing Centre.

The Canadian National Institute for the Blind is responsible for launching the program, and the Regina version was sponsored by Jumpstart.

Thursday’s climbing session was led by Regina Climbing Centre instructor James Lewis, who says he wants to play a small part in the children’s future success.

“For me, I want them to be self-sufficient down the road, and giving them the tools or even just the mental fortitude to be able to go into an unknown territory safely but with a good mental state. If they have the ability to think and problem solve while they’re climbing up a rock wall that they have no idea what the next hold’s going to be, that’s going to give them a lot of life skills down the road,” Lewis said.

One of the participants in the program, Zander, was a quick learner and adapted quickly to the newly learned skill of rock climbing.

Marquee positional matchup awaits in Roughriders rematch with the Lions

He mentioned that his favourite wall to scale was one situated in the left corner of the centre, because of the amount of places he could put his hands and feet.

Another pupil named Fletcher scaled multiple walls with little to no challenge, all the more impressive considering he was a first-time climber.

Lewis said that teaching rock climbing to youth with sight loss requires him to come up with a different coaching method.

“That’s why I brought out the table earlier, so they can feel the rocks and that way it isn’t a surprise when they get up there. So it’s a lot of positive reinforcement and not pushing them too far where they get into tears,” said Lewis.

Zander said he is all for a second go-round at the climbing centre.

“Yes, I love it. And then maybe after I wish I could go bowling.”