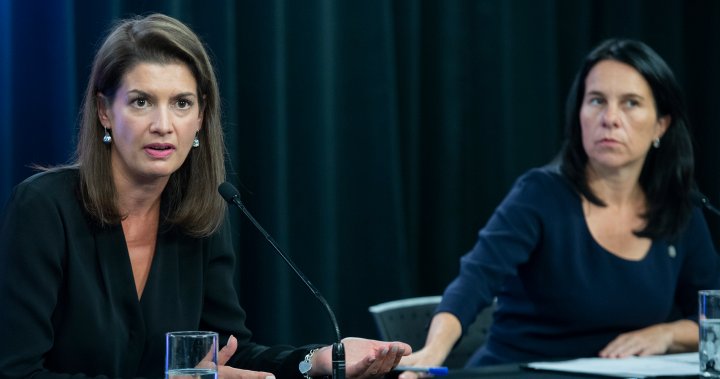 Quebec says it will invest $250 million over the next five years, or $50 million a year, to hire more Montreal police officers in an effort to combat the city’s rising gun violence issue.

The province’s minister of public security, Geneviève Guilbault, made the announcement at a press conference held in Montreal on Saturday, accompanied by Montreal’s mayor, Valérie Plante, saying the goal is to hire several hundred more police officers to join the city’s SPVM police force.

Of the $250 million, $25 million will go toward funding social intervention teams, something Mayor Plante said the city will match with its own money, with a target of hiring 50 more social workers to respond to mental health calls.

Plante said 30 per cent of all 911 calls placed in the city are related to mental health issues, so more mobile mediation and social intervention teams are needed to help deal with many of the crisis situations and not armed police officers.

The other $225 million from Quebec will go toward hiring a total of 450 new police officers in the next five years.

“There is a need for Montrealers to feel an increased police presence in their streets, in the parks, almost everywhere in the metropolis,” Guilbault told reporters Saturday, adding that people of the city are still shaken by two daylight shootings that happened last Tuesday.

“Montreal will not be the playground for criminals. I want Montrealers to feel safe,” the mayor said.

She again reiterated the issue of illegal weapons, something she’s been urging the federal government to crack down on harder.

She said the country needs better gun laws, better border control over the transport of firearms, and also mentioned the issue of 3D printed weapons.

“The fight against armed violence is a top priority at the SPVM,” said interim Montreal police director Sophie Roy. “Criminals don’t hesitate to use their weapon in public places and we will not tolerate it.”

She added that police officers need to feel the public’s support.

Guilbault also touched on the police officer labour shortage, adding that money alone isn’t enough to fix the issue — the officers need to be recruited, which is currently something the police forces in Quebec are struggling with.

She said the province has made an arrangement with the National Police Academy to increase space by 72 places per year in its training program in order to have more recruits available for the SPVM.

Other proposed measures include the return of retirees and assistance from the Sûreté du Québec (SQ) police force, despite the SQ also dealing with staffing issues, according to Roy.

She added that the SPVM is working to accelerate the recruitment process and improve officer retention by conducting exit interviews with staff that decides to leave the force before retirement.

Just last Tuesday two shootings took place in broad daylight in public spaces, shaking residents’ sense of security. In the span of 30 minutes mid-day on Tuesday, one man was shot in the parkling lot of Rockland shopping center and another man was shot on a terrace of a pizzeria on Saint-Denis Street.

Plante refutes claims she wants to defund the police

Mayor Plante again refuted claims that she has ever wanted to defund the city’s police force or that her administration mismanages funds and invests police money into other sectors.

“We have complete confidence in the City of Montreal and the SPVM,” added Guilbault.

–with files from the Canadian Press