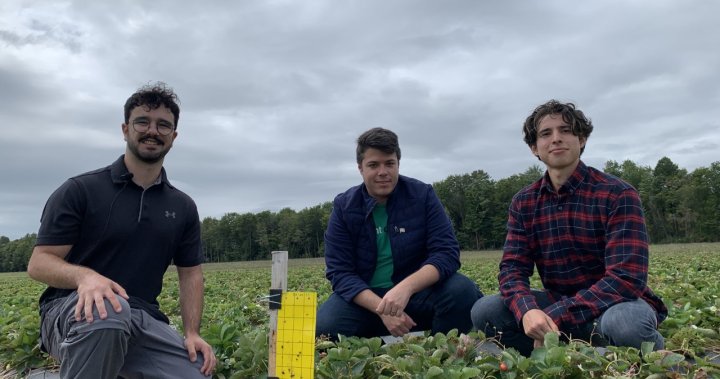 A new insect has arrived in Canada and it’s beginning to spread a harmful plant disease within Quebec’s strawberry crops.

But a group of Quebec and Latin American researchers are trying to nip the spread of the insect in the bud.

“In recent years, growers noticed that they have many, many more leafhoppers in strawberry fields,” explained Nicolas Plante, a Laval University masters student and head of the project.

Plante believes leafhoppers are migrating north because our summers are getting warmer.

It’s bad news because the insects, Plante says, have the potential to destroy entire crops.

“One of the ways that this insect affects the farmers is that it reduces the quality of the fruit … also it can lead to reducing production of the plant,” said Edel Perez Lopez, an assistant professor at Laval University leading the research team.

Quebec is known to be the king producer of the queen of berries.

According to data released by Statistics Canada in July, more than half of all strawberries grown in Canada in 2021 came from Quebec fields.

However, that same year, strawberry production in Quebec was down 16. per cent below the record-high set in 2017.

“This research is really important in order to keep producing strawberries how we do right now,” Perez Lopez said.

As part of their research at Laval University, the scientists are trapping the insects then analyzing the DNA of more than 500 samples.

He is in Canada as part of the Mitacs Globalink Research Internships program, which helps participants gain research experience here in Canada.

“We don’t have a lot of information about (leafhoppers), so that’s why we’re trying to figure out what’s going on here with those insects,” Torres García said.

The goal is to identify which specific leafhopper is causing the disease so they can find strains of strawberries that resist the bug.

It will also help farmers reduce the amount of pesticide they use in their crops.

“In the long term, we hope that it will help us manage the production of strawberries in a more optimal way,” said Marine Mal, a project manager with the Ferme Onésime Pouliot.

The farm is one of several benefitting from knowledge shared from the research.

Researchers hope they can publish the results and findings of their research before the end of the year.