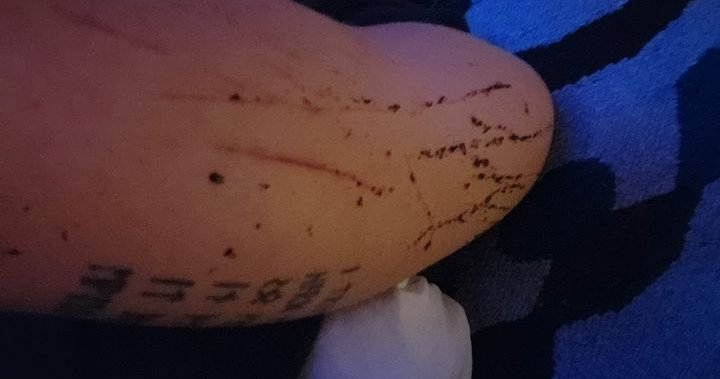 A Naramata resident suffered minor injuries after a close encounter with a young bear on Sunday.

According to Conservation Officer Service, the man went outside around 1:30 in the morning to check on his garden and ran into the bear on his way back to his home.

“The bear basically went towards him, and they both made contact with each other,” said Penticton Conservation Officer Mike Stern.

“The individual put his shoulder in towards the bear. And at that time, he punched the bear in the neck, and the bear stopped, turned around and ran off in the other direction.”

The man managed to escape with a few scratches on his arm and did not need medical attention. Stern said the two likely startled each other.

“This happened to be really tight quarters and the individual involved was very sorry that it happened, he felt somewhat embarrassed,” said Stern.

The bear wasn’t reported beforehand and hasn’t been seen since the encounter, so conservation says there is no ongoing threat to the public.

“We believe that the bear was probably getting some grapes right there and they basically surprised each other so, at this point, I don’t believe there’s a public safety issue,” said Stern. “We will monitor any further complaints in the area, and we’re probably not going to action this bear and let him be.”

Bear sightings are quite common in the Naramata area. Back in 2014, the community earned its official Bear Smart Status through the Bear Smart Community Program.

Since launching the program Shelley Fiorito, WildSafeBC Community Coordinator for the Regional District of Okanagan Similkameen, said residents are more bear aware and the number of bear incidents has decreased.

“We’ve had a few encounters. We haven’t had any physical altercations up until now,” said Fiorito.

She went on to say that incidents like this prove to be an important reminder about bear safety.

“Management is key to making sure that everyone is safe. So, you want to make sure that your garbage cans are stored correctly, and there isn’t any way for wildlife to access that garbage,” said Fiorito.

If you do have any kind of interaction with a bear or other wildlife, Fiorito says to contact Conservation as soon as possible.

“It’s really important to let the conservation officers know…before things escalate into a conflict. Once a bear is habituated to the area, it’s really difficult to convince them to leave and not come back,” said Fiorito.