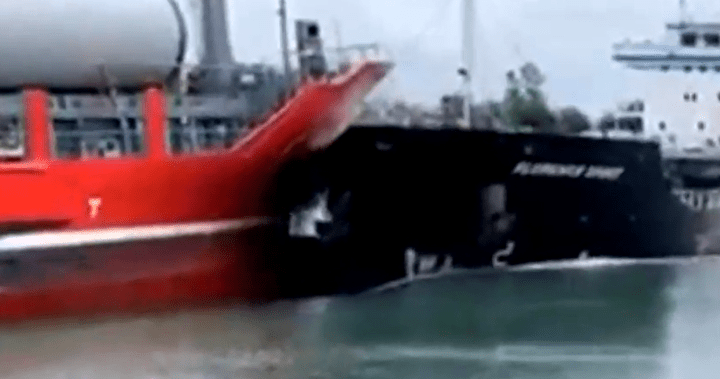 The Transportation Safety Board of Canada (TSB) says a 2020 collision between two cargo vessels in the Welland Canal was caused by “hydrodynamic forces” acting on one of the vessels in the waterway.

Investigators say the coming together of the Florence Spirit and the Alanis near Mile 16 of the canal in Ontario caused “sustained extensive structural damage” to the hulls of both boats.

The two ships, travelling in opposite directions, collided head-on around 4 p.m. on Saturday, July 11, 2020 in Ontario’s Welland Canal – a key shipping route that connects Lake Erie and Lake Ontario.

The Florence Spirit was shipping coal destined for Quebec City, while the Alanis was bound for Duluth, Minn., with wind turbine components on board.

No one was hurt, and no pollution in the waterway was observed following the incident, according to the TSB.

The federal agency says “instant messaging” between those in control of the ships diverted the attention of the Florence Spirit’s master away from co-ordinating the encounter with his own bridge team and excluded other bridge team members from having “safety-critical information.”

The result was a lack of co-ordination and communication between team members, affecting their ability to monitor the vessel’s progress and the effect of “hydrodynamic forces” acting on the vessel.

“The Florence Spirit proceeded into the meeting at the maximum permissible speed of 9.9 knots, which increased the hydrodynamic forces acting on the vessel and reduced the ability to maintain steering control,” the TSB said in its report.

“The hydrodynamic forces generated, combined with the proximity of the bank, produced a yawing moment such that the vessel yawed uncontrollably to port into the path of the Alanis and collided with it.”

The result of the crash was the issuing of a Marine Safety Advisory in February 2021 to McKeil Marine, the Florence Spirit’s authorized representative.

Transport Canada says it identified deficiencies in McKeil Marine’s quality and safety management system. It has since advised the outlet to review on-board notices, training, equipment and procedures.

The report goes on to say McKeil Marine reviewed the accident and produced an internal investigation study.