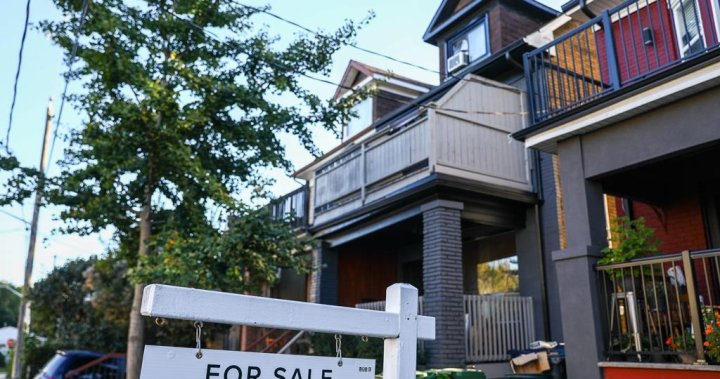 
Realtors in the Hamilton-Burlington area say the cooling trend in the local residential home market continued in July with sales down year over year by about a third.

Last month, the Realtors Association of Hamilton-Burlington (RAHB) reported a drop of 35.6 per cent in overall sales activity in the region compared with 2021, with the city of Hamilton seeing a 39.8 per cent decline over the same period.

While sales were down, new listings in RAHB’s coverage area continued to grow, with 1,783 reported in July, up 18.6 per cent from July 2021.

Toronto-area home sales down 47% from last July, 24% from June: real estate board

Hamilton had about 117 per cent more active listings compared to a year ago, with 1,464 on the market this past July compared with the 674 available in the same month in 2021.

0:33
Charest tells Conservative voters: ‘I can win a majority government’


The sale of detached properties in the region was down 25.5 per cent from June 2022 and off 37.3 per cent compared with the same time last year, pointing to some apprehension last month for buyers to spend big.

“July saw the first dip below the $1,000,000 mark since October 2021 in the average sale price of detached properties across the RAHB market area,” president Lou Piriano said.

“While that represented an overall decrease of 6.6 per cent from June 2022 to $985,363, average sale prices of detached properties are still up by nearly five per cent compared to the same period in 2021.”

A detached home in Hamilton was worth only one per cent more year over year, checking in at an average of price $861,194.

Month over month, that price dropped nine per cent from the $949,730 average reported in June.

The realtors association says homes costing more than $1 million in the Hamilton area are in Flamborough, Ancaster and Waterdown as of July 2022. The average price in Burlington is up again year over year from around $1.04 million to $1.14 million.

Burlington continues to have the region’s highest detached home cost at just over $1.4 million, a jump of four per cent year over year.

Month over month, the average apartment slipped in value about one per cent from June’s $529,014 average price.

An average apartment-style unit is up 14 per cent month over month in Burlington checking in at $716,303 this past July, up 28 per cent from the same period last year.

In terms of supply, Piriano says apartment-style properties finished July with the highest inventory levels compared with other property types, pointing to more choice and negotiation power for buyers.

“This segment posted the only increase in average sale price since June 2022 and … was also up 14.9 per cent compared to the same period in 2021,” Piriano said.

Flamborough continued to have the highest average price for a home in Hamilton proper, checking in at around $1.3 million.

Value in the area is up for the average dwelling year over year, by four per cent, but down month over month slipping six per cent.

The lowest average prices are in Hamilton Centre, where a home was around $596,425 at the end of July — down six per cent month over month and up six per cent year over year.