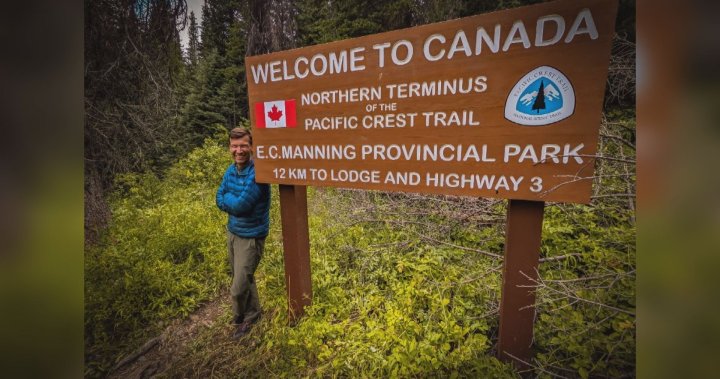 Former city councillor and mayoral candidate Jeromy Farkas is back in Calgary and readjusting to city life after months away on a gruelling 4,270-kilometre journey on the Pacific Crest Trail in support of a local charity.

Farkas crossed the finish line on Saturday, which he admitted felt like “a huge weight” was lifted off his shoulders, but added it was a bitter-sweet end to the trek.

“I knew after five months of nearly 40, 50, 70 kilometers a day, running, walking, hiking, crawling; I knew that my body was at the limit,” Farkas told Global News.

The Pacific Crest Trail begins at the U.S.-Mexico border and crosses several national parks and mountain ranges through California, Oregon and Washington.

Earlier this year, Farkas announced he’d be tackling the hike to raise money for Big Brothers Big Sisters Calgary and Area, with a goal of $50,000 in honour of his late grandmother.

Yesterday, @KennyVLimaC welcomed @JeromyYYC home as he concluded his 4,270 km trek on the PCT in support of mentorship! Welcome back to #yyc, Jeromy! We can’t wait to celebrate the big difference your journey will make for young people in our community. #MentoringMatters pic.twitter.com/GnB9cdZ2ah

Despite Farkas’ completion of the trail, the fundraiser will run through to Sept. 20, when a final tally will be shared at an event to celebrate the journey.

“We had this guy out there on the trail for months at a time with every possible weather condition and man versus nature scenario that you read about in books,” said Big Brothers Big Sisters Calgary and Area CEO Ken Lima-Coelho.

Farkas said he endured sandstorms, frostbite, mountain peaks and deserts throughout his journey, in which he garnered the nickname “pathfinder” for his use of paper maps instead of digital GPS and cell phones.

I started this journey to try to prove to myself that I was still capable of great things. By now, I realize I had nothing to prove — only everything to learn.

To admit my shortcomings. To abandon expectations. To trust my intuition. To love my failures. To embrace wonder.

“I had some moments where I wanted to quit, but I knew that I couldn’t because a lot of people were counting on me and the awareness and the fundraising we were doing on behalf of these kids in our community,” Farkas said.

He said he felt the support from Calgarians and new friends along the trail to help complete the lengthy journey.

The former city councillor described the trip as “humbling,” as he encountered situations where he needed help from other hikers on the trail, something Farkas said was awkward given his “lone wolf” approach to situations.

Farkas was elected as city councillor for Ward 11 back in 2017 before seeking a bid to replace Naheed Nenshi as mayor in the 2021 municipal election — a race he lost to current mayor Jyoti Gondek.

During the lengthy days on the trail, Farkas said he had plenty of time to reflect on his time at Calgary city hall.

“If I went in the southern California desert the way I went into a city council meeting, I would not have escaped alive,” Farkas said.

“I had to confront some things about myself in a really uncomfortable way and I had to learn to work together as a team.”

According to Lima-Coelho, Farkas’ journey has inspired more volunteers with the organization as well as provided a lesson for the kids they serve.

“The guy didn’t win the mayoral election, that’s a pretty big public defeat, but he didn’t take his ball and go home, he said, ‘I’m going to do something different, I’m going to do something remarkable,’” Lima-Coelho said. “That’s a really good lesson for the littles that we serve — to show that adversity doesn’t have to be the whole story. You can move through it and you need help to do that.”

What’s next for Farkas, besides rest and air conditioning, remains unclear, but he said the acts of kindness he saw while on the trail will hold inspiration for him in whatever he does moving forward.

More information on the fundraiser can be found on the Big Brothers Big Sisters of Calgary and Area website.