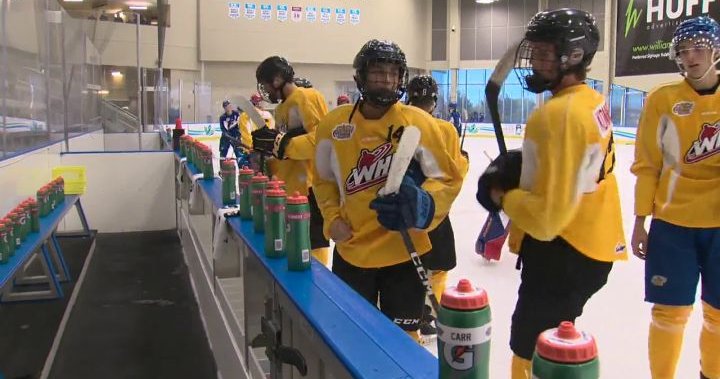 After capturing the Western Hockey League championship in June and then taking part in the Memorial Cup tournament, the Edmonton Oil Kings’ relatively brief off-season officially ended Thursday when the team’s first day of training camp got underway.

“It’s been a little bit of a whirlwind,” said Luke Pierce, who was hired as the Oil Kings’ new head coach in July after Brad Lauer stepped away from the job to become an assistant coach for the NHL’s Winnipeg Jets. “I’m truly honoured to be leading the franchise in a bit of a new journey this year and I couldn’t be happier to get started.

“It’s a really exciting day and it’s been an exciting month… having guys here on the ice it really sinks in.”

Pierce’s promotion provides the team with some continuity as he spent the past four seasons on Lauer’s coaching staff. But a number of the players who helped the Oil Kings win the Ed Chynoweth Cup in June are unlikely to be back.

“(This season will be a) younger team, there’s no question, and a very eager team,” he said. “There’s a lot of guys in there that want to defend our title tooth and nail, and I think we’re going to be a very scrappy team that’s going to work for everything.

“I’m excited for the youth and enthusiasm that we have in the room.”

Defenceman Logan Dowhaniuk said Pierce has developed a reputation for working hard and ensuring his players know what to expect.

“He’s definitely a guy that young guys can talk to,” the 20-year-old from Sherwood Park said.

Pierce said while he gained more strategic knowledge during Lauer’s tenure with the club, he considers himself “more of a motivational guy than an… (Xs and Os guy).”

“Relationships for me are everything,” he said.

“I want to push players to get more out of themselves than even they think they can.”

With the expected turnover on the roster, Pierce said “there’s going to be a lot of learning lessons” during the upcoming season. He added that Serge Lajoie joining the club as an assistant coach in August has made the transition much easier for him.

Lajoie has a lengthy resume that includes head coaching stints with the WHL’s Kamloops Blazers, the NAIT Ooks and the University of Alberta Golden Bears, whom he guided to a national championship in 2018.