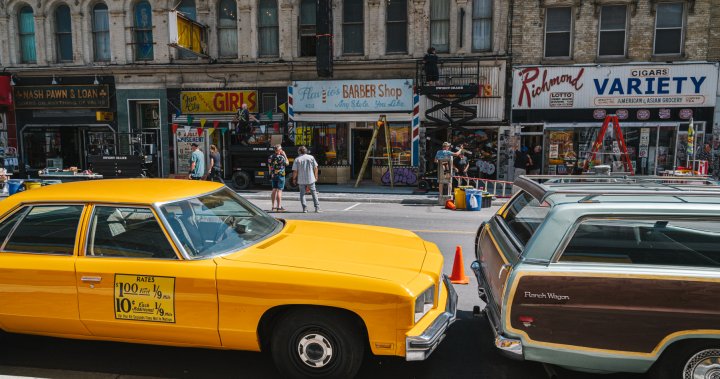 A stretch of Richmond Street in downtown London, Ont. looked a bit more like New York City from the history books on Wednesday as production ramped up on a new Apple TV+ series which is filming in town this week.

Richmond Street was blocked off by police between Dundas and King streets as crew members put the finishing touches on the 1970s-era New York streetscape, complete with vintage vehicles, a newsstand, fake graffiti, and signs advertising adult entertainment and cheap hotel rooms.

Passersby snapped photos of the time machine transformation, which comes courtesy of Apple Studios and Annapurna Television who are producing a series for Apple TV+ based on Victor LaValle’s 2017 novel The Changeling.

An announcement last year by Apple described the series, which stars LaKeith Stanfield, who is also an executive producer, as “a fairytale for grown-ups. A horror story, a parenthood fable and a perilous odyssey through a New York City you didn’t know existed.”

The city’s road closure portal lists the name of the production as Improbable Valentine, as does a listing on the website of the Film and Television Industry Alliance (FTIA). It’s unclear, however, if that is just the production codename or whether that will be the series’ final title.

The FTIA listing summarizes the drama as focusing, “on the death-defying odyssey of Apollo Kagwa and Emma Valentine as they look to find out what happened to their son who was removed from them.”

“On their voyage, they will travel through enchanted isles and haunted woodlands, meet glowing witches, demon giants and racist cops,” the summary continues.

The production is expected to complete shooting next month, and is also filming in Toronto, New York City, and Jersey City, NJ, the listing says. The series is being written by Kelly Marcel, who is also a producer, and is being directed by Melina Matsoukas.

Officials with Film London, a film production concierge run by the London Economic Development Corporation, would not confirm the name of the production or who was involved, but said on Wednesday that things had been going smoothly.

“A huge shout out to my friends and partners over at the City of London who worked very closely with the film office and the production themselves, on every production, to just make things happen that productions need to have happen,” said Andrew Dodd, manager of Film London.

“There’s a lot of moving pieces in there and it takes a lot of coordination, and everybody I work with over at the city and other partners downtown have just been fantastic.”

James Edwards, owner of AAHC Barbershop and Salon, told Global News last week that he and other business owners were advised that production would occur from Wednesday to Friday, with the majority of filming taking place in the evening.

The city’s road closure portal states that Richmond will reopen by 10 p.m. Friday.

“I’ve seen some notices that have been posted around that seem to indicate that the road is closed for one day only, but often productions can stay around and do some wrap up or some additional shooting,” said Dodd.

Improbable Valentine is just the latest television production to come to the city this year. In the spring, London served as a leg on The Amazing Race Canada in an episode which aired on Aug. 16.

“We’re tracking a few in the upcoming months that we really hope will land here,” he reiterated on Wednesday.

“I always say nothing’s certain until it’s certain, there’s so many moving pieces in this industry. But if these productions that we’re tracking choose London, it could mean really great things for our local moviemaking ecosystem,” he said.

In attracting production to the city, he noted that different productions of different sizes look for different things in a shooting location, but says London tries to be “able to offer as much of those things as we can.”

“We’re a little bit farther to travel than they’re used to if they’re trying to stick within the GTA, but we hope to offset that with some reasonable location fees or some really unique or interesting locations that may be harder to get elsewhere,” he said.

“It’s true in real estate and it can be true in the film and TV industry as well. Location, location, location. If we can offer something that they’re having trouble finding, then that’s worth the trip to London for them.”

— with files from Andrew Graham