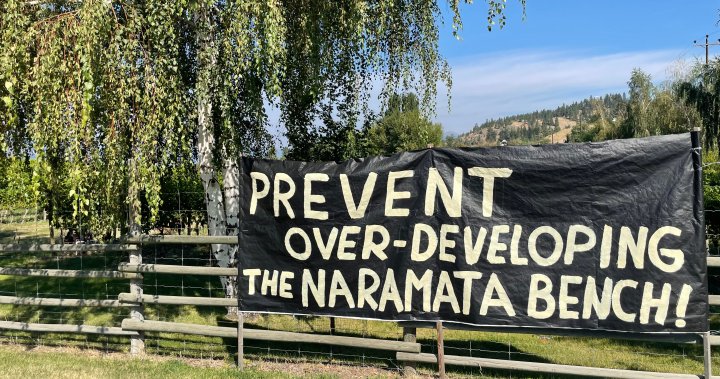 A controversial Naramata development is back on city council’s agenda following a public engagement period.

“More than 500 people provided input into the proposed residential development of 1050 Spiller Road,” read the city of Penticton news release.

“With results showing strong opposition to the current proposal but close to half of respondents being open to future development with stricter conditions.”

Preserve Naramata Bench Society, a group of residents who oppose the development, has been very vocal about their opinions.

The group first formed in 2020 when the original development was proposed.

“We were behind the tractor rally in 2020 when 30 tractors drove into the city and we gave speeches, we are part of the banners depicting our concern that you may see driving along Naramata Bench,” said Preserve Naramata Bench society Director Gjoa Taylor

During Tuesday’s council meeting, Penticton city staff will present results from the public engagement process and a development update.

“One recommendation that we are presenting to council on Tuesday is that those engagement results be included when we review the land use applications,” said city of Penticton planning and licensing manger Audrey Tanguay.

“That’s very important and that is why I wanted to go through the engagement process.”

According to the city, 54 per cent of the 502 participants are opposed to any development at this location due primarily to the potential impacts to the environment and local economy.

Another 16 per cent are fully supportive of development, while another 30 per cent support the development with the following conditions:

Although views are mixed on development in the area, 71 per cent of participants oppose the proposal.

“We have a lot of people on our side,” said Taylor.

“We have First Things First, a local group advocating against climate change, 42 businesses owners along Naramata Bench and Penticton, Naramata Slow Society, Interior Health, the Penticton Indian Band and the RDOS is still advocating for a 500-metre buffer near the landfill.”

The city attributes the opposing participants to several concerns including: traffic, landfill, the wildfire interface, the affordability of housing, and potential environmental impacts.

Since the engagement process Canadian Horizons have decided to withdraw their zoning and OCP land use amendment applications and have made a new application.

“The new application that we just received, we haven’t reviewed it yet but it follows the existing zoning so no requirement for OCP amendment or zoning amendment at this time,” said Tanguay.

“The zoning has been in place since the late ’70s for the property,” Tanguay.

“People may ask why a mobile home park. Well, in the ’70s there were a lot of mobile home parks implemented in Penticton and that was one of the areas that they were looking at implementing one.”

City staff will review the application over the next several months.