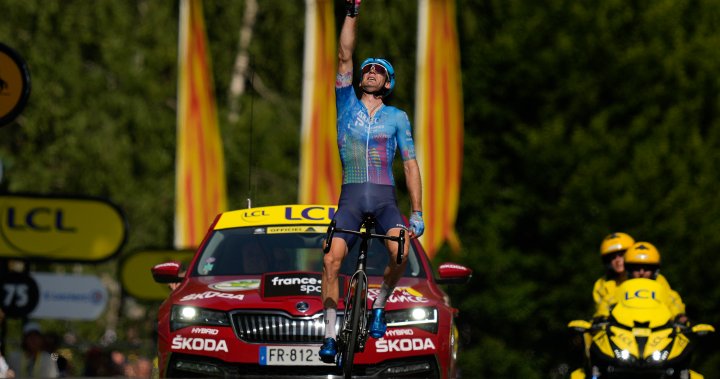 Canadian cyclist Hugo Houle’s elation has lasted for weeks after he crossed the finish line in Stage 16 of the Tour de France well ahead of the competition.

The Sainte-Perpetue, Que., native pointed to the sky as his trek came to an end in late July, dedicating his win to Pierrik, his younger brother who died at the age of 19 after being struck by a drunk driver in 2012.

“It was a great moment, of course,” Houle said in an interview Thursday. “It lasted for quite a few days, I would even say a few weeks.”

The victory was not only Houle’s first Grand Tour stage win but also a culmination of practice and sacrifice over his 12 years as a professional cyclist. When he was a kid, he had too much energy — so he started doing triathlons with his little brother and step by step, he began to reach different levels.

Houle credits his hard work, experience and even a bit of luck for his win. He came up from behind and then accelerated quickly to keep a gap with his competitors as the end of the race neared.

“I was able to surprise them,” he said.

What Houle describes as a great moment also marked the first stage win by a Canadian at the Tour de France in 34 years. He also made history by being the first Quebecer to win a stage at the prestigious competition.

“I made some progress this summer. It was really the best season of my career so far and I could get the big result,” he said.

What’s next for Houle? He is back in his home province and ready to hit the road for the upcoming Grand Prix Cycliste de Montréal on Sept. 11.

The professional cyclist can’t wait to see the spectators and hear their cheers, too. Houle has been putting in the effort for the event and he plans on bringing his good mood to the next race.

“Now I’m back on track and everything is back to normal. And I’ll have to train hard for the next big race coming up in a few days,” he said.

— with files from Global News Morning and The Canadian Press