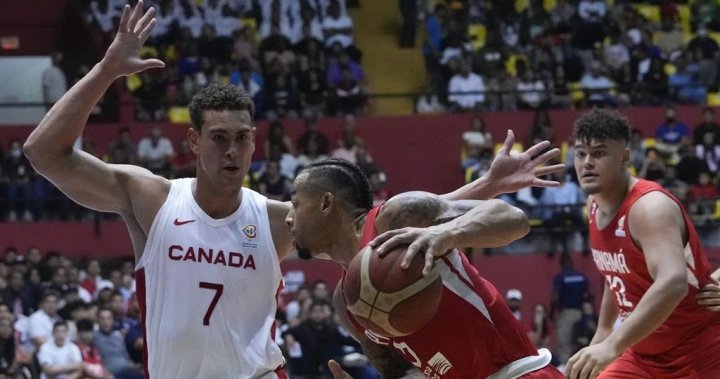 Detroit Pistons forward Kelly Olynyk scored 18 points, while Kevin Pangos added 17 and the Canadians, the only unbeaten team in the Americas zone, improved to 8-0, and all but locked down their spot in the 2023 FIBA World Cup.

Jhivvan Jameel Jackson Melendez had 16 points to top the Panamians.

Lapena, Canadian women’s basketball team to gather in Edmonton ahead of World Cup

Canada took the floor Monday already a step closer to qualifying, thanks to Venezuela’s 76-72 win over the Dominican Republic earlier in the night. The Canadians then needed both to beat Panama and the Bahamas to upset Argentina in the late game. While they beat Panama, the Bahamas couldn’t beat Argentina, losing 95-77.

The Canadians were coming off a 99-87 win over Argentina on Thursday in Victoria, their toughest qualifying test so far.

They established their dominance early Monday, racing out to a 16-0 lead before Panama finally got on the scoreboard with 5:56 to play in the first quarter. Canada’s smothering defence held Panama to 3-for-16 shooting, and forced five turnovers. The Canadians took a 33-7 lead into the second.

Score differential counts in FIBA tiebreaks and so there was no letup by Canada in the second quarter. Pangos’ three-pointer 50 seconds before the break gave the Canadians a 42-point lead.

Edward Lopez’s buzzer-beater from beyond half court gave the Panamanian fans in Arena Roberto Duran something to cheer about, and sliced Canada’s lead to 64-25 heading into halftime.

The Canadians continued to build their lead, and were up 92-36 with one quarter to play.

Coach Nick Nurse was able to go deep into his bench for much of the second half, as young players such as 20-year-old Edey, a seven-foot-four forward for Purdue, were given important playing time.

The Canadians dominated across the board, forcing 20 Panama turnovers. They outrebounded the home team 50-34, shot 56.7 per cent from the field to Panama’s 34.1 per cent.

Monday’s game was the final time Nurse had NBA players at his disposal, as the final two qualifying windows are in the middle of the NBA season, Nov. 7-15, 2022, and Feb. 20-28, 2023. Nurse likely won’t coach in those windows either, as he’ll be busy with the Toronto Raptors.