Canada’s housing market is cooling off. What does this mean for the fall? – National | TIF News 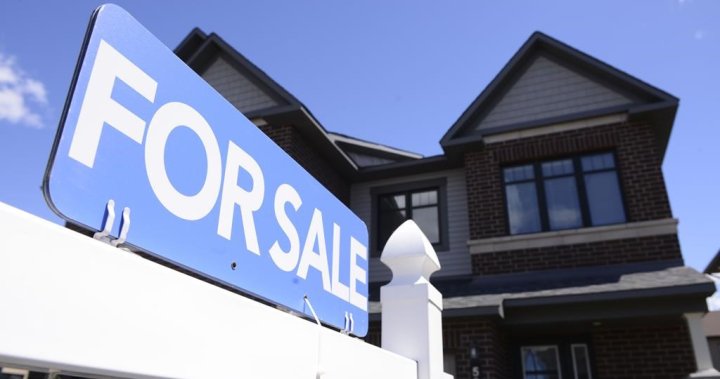 After fuelling Canada’s economy through the COVID-19 pandemic, the real estate market is showing signs of weakness as home prices fall and bidding wars dissipate.

It’s welcome news for prospective buyers hoping for a better price. But as the busy fall season nears, realtors and economists are at odds over how long the pricing slide will last and how low it will go.

“The fall is going to be interesting because we’re going to see probably more buyers jumping into the market and you don’t need a ton more buyers to provide a little bit more stability to prices,” said John Pasalis, president of Realosophy Realty Inc. in Toronto.

“Just a little bit of a bump in demand could be the difference between homes selling in three, four weeks versus selling in two weeks or selling a lot faster.”

The average home price is still above pre-pandemic levels, but increasing mortgage rates and inflationary pressures are weighing on the market.

4:24
Despite rising interest rates some home buyers are being lured back into the market by falling house prices

But some economists are anticipating an even greater price reduction.

In June, a trio of Desjardins economists said they expected the average national home price to fall by 15 per cent between its February high _ $817,253 _ and the end of 2023, but because “we’re almost there,” they adjusted their forecast in August to predict a drop between 20 and 25 per cent.

Canadian home prices were down 23% in July from February peak: CREA

“Home prices continue to fall and have further to go before they find a bottom,” said Randall Bartlett, Helene Begin and Marc Desormeaux, in a report released July 11.

“That said, we still believe home prices will end 2023 above pre-pandemic levels nationally and in all 10 provinces.”

In anticipation of a drop in prices, agents have noticed prospective buyers sitting on the sidelines of the market in recent months, while sellers come to terms with the fact that their homes won’t fetch as much money as they would have at the start of the year.

Lori Fralic calls it a “stalemate.”

“There’s lots of bargain hunters out there who are throwing out offers but if they don’t have to sell, a lot of sellers are saying, ‘no, sorry, not taking it.”

It’s a change from the torrid pace of sales and frenzied bidding wars seen earlier in the year and late last year.

Much of the shift is attributable to mortgage rates, which mirror fluctuations in interests rates and can eat into buying power.

The Bank of Canada increased its key interest rate by one percentage point to 2.5 per cent in July in the largest hike the country has seen in 24 years.

She’s seen a drop in prices in B.C., but said it’s not as much of a decrease as many expected.

“If people are thinking (prices) are going to plummet, I don’t think that’s accurate,” she said.

“If you look at the 10-year average of Metro Vancouver, housing prices are way up and if they do dip, they might dip slightly and come back up. There’s always been sort of a steady incline with dips along the way.”

1:53
New poll finds majority of Canadians are cutting back on spending

New poll finds majority of Canadians are cutting back on spending

The Real Estate Board of Greater Vancouver said the composite benchmark price for the region _ often Canada’s hottest _ sat at more than $1.2 million in July, a roughly 10 per cent increase from July 2021 and a two per cent drop from June 2022.

Markets, she said, tend to be very localized and the surges or drops some see may not be mimicked in others.

For example, she said Alberta has not seen the slowdown many other Canadian markets have because its energy sector is much stronger than it was in the past.

But Cooper noted home sales activity have declined very sharply in the Greater Toronto Area, the Greater Golden Horseshoe Area and in parts of British Columbia around Vancouver.

“It’s the markets that experienced the 50 per cent increase in home prices that have seen the biggest correction, and that’s what you’d expect because those are the most expensive homes in Canada with the largest outstanding mortgages.”