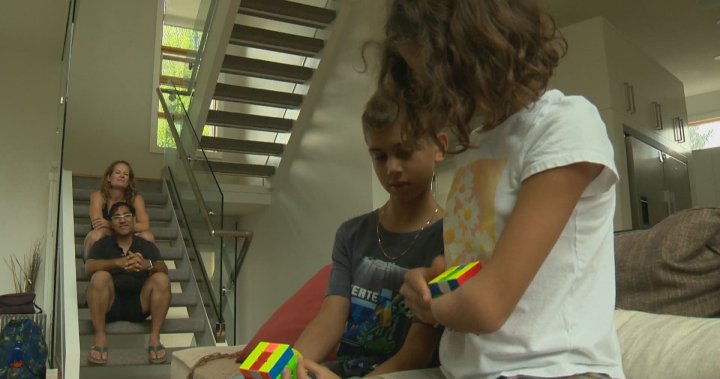 There is a constant clicking sound in all corners of Frida and Zain Ismail’s Calgary home. It’s coming from a multi-colored cube clutched in the fingers of their children, as they stare down at puzzles they are determined to conquer.

The Rubik’s Cube began as pandemic pick-up hobby but has turned into a passion, especially for Erik, their middle child.

“He borrowed one from a neighbor,” remembers father Dr. Zain Ismail. “It was really stiff and hard but it reminded me of 30 years ago when I did a little cubing.”

Erik was seven when he solved his first two-sided cube in a just a matter of days.

“I learned how to solve that, easy-peasy,” he said, grinning. “My dad told me when he was little he could solve the big ones like these with rows of three, so I was interested.”

“I showed him as much as I could remember,” said Zain “We’d cube together and before long he was faster than me, then twice as fast and three times as fast.”

“And then you were left in the dust,” laughed Frida Emry Ismail, Zain’s wife.

Now nine, Erik has been to cubing competitions in both Sweden and Edmonton. He studies videos and researches algorithms in an effort to get faster.

“My record is twelve seconds — I got that just last week,” he said proudly.

But Erik and his Dad are not the only one’s twisting cubes in the house.

“Everywhere he goes, he brings a cube. But I’m like, ‘I can solve it too!’” said sister Zora, who has also been by his side learning the tricks of the trade.

“Eric is way faster — almost a minute faster — but I can do it in a minute and a half.”

Zora was born with one hand, but it in no way has slowed her down or stopped her from accomplishing everything she puts her mind to.

“I ride horses and I do gymnastics, and I used to do martial arts,” she said

“I’m a normal human: I can do what everyone else can do, if not better,” Zora added, smiling.

2:33
Meet a Montreal magician who has a ‘mind-boggling’ 1.7M TikTok fans

Frida and Zain admit sometimes they even forget she is working with just one hand, because she always finds her own way to a solution.

“The workaround she comes up with are beyond what any of us would come up with,” said Frida. “And because she was born like that, that’s just they way she is and she figures it out.”

While Zora is clearly impressed and sometimes frustrated by her younger brother’s speedy cube time, he is inspired by her.

“I don’t really say this, but that’s actually really cool that she can solve it with one hand — and she’s fast too,” Erik said.

It’s not uncommon for the Ismail’s to draw a crowd when they pull out their cubes in public at the beach or pool, or just waiting in line somewhere.

But the father is quick to point out studying the Rubik’s cube can have benefits far beyond a fun hobby and has real benefits.

When he’s not cubing with his kids, Ismail is an Alzheimer’s specialist and believes it benefits far beyond just being an enjoyable hobby.

“Frankly, the best prevention starts at this age, with enriched activity like cubing, sports, bilingualism,” he said. “It’s on to the list of ‘cool things’ they do that are good for their mind and body.”

The Ismail’s practice a puzzle nearly every morning before school.

Erik now has his sights set on a competition in Canmore in the fall and larger competitions in the future.

Both Erik and Zora are now teaching their youngest brother how to solve puzzles. But the real puzzle is who will ultimately be the fastest.