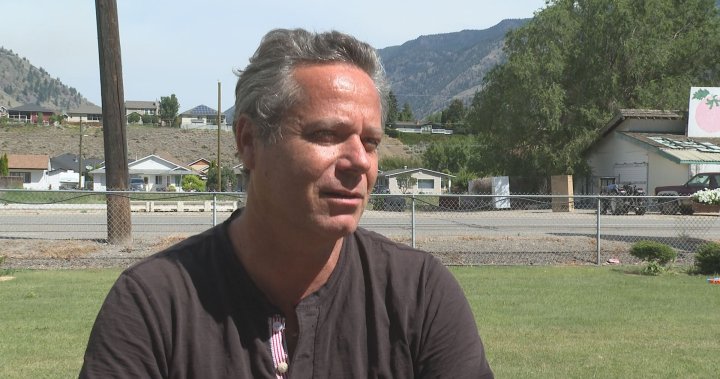 
The Keremeos Creek wildfire has forced hundreds of local residents to evacuate.

Many are uncertain when they will return. Some may not be able to return at all.

Les Murzsa had been working on his off-the-grid home near Apex Mountain for the past 10 years. He was only a few weeks away from finishing the home when the wildfire sparked.

On Friday afternoon, he noticed smoke coming up from the mountains. About six hours later, the wind picked up and the fire made its way across the road.

“At around 10:30 the five firefighters came and told me to evacuate. At that point, ash was raining all over my house, and I assume that the ash accumulated long enough that eventually, it ignited the house,” said Murzsa.

“(They’re) obviously worried about the status of their homes and pets. We’re doing our utmost to get it under control where people live so that we can start downgrading orders to alerts,” said BC Wildfire Service information officer Bryan Zandberg.

When Murzsa left his home, he wasn’t expecting he would ever return.

“Fortunately a friend of mine encouraged me to pack my car just in case. So I put as much as I could in my car. And I certainly would’ve taken more but I was so hopeful everything would be fine,” Murzsa says he had to leave behind his cat, a 40-year-old vinyl collection and a 110-year-old piano.

“It can be hard to let go of the memories of all my stuff but in the end, it is just cardboard.”

Highway 3A reopens after being closed by Keremeos Creek wildfire

Murzsa’s close friend has started a fundraiser to help him rebuild what he’s lost. He’s grateful for the support he’s received so far.

“To be alone would be heartbreaking, so it’s very nice having people come by and tell me how sorry they feel for me, and ask what they can do to help. It’s been amazing,” Murzsa said.

He is currently staying in Keremeos with a few of his neighbours who also evacuated. He’s unsure what will be left when he’s finally able to return home.