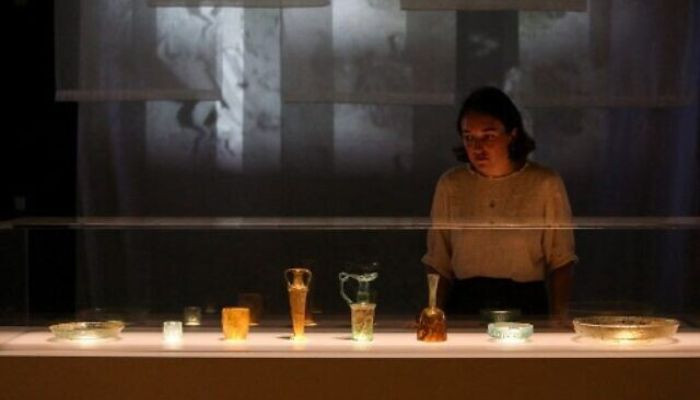 Eight ancient glass vessels shattered in the 2020 Beirut explosion go on display at the British Museum from Thursday, walking visitors through the painstaking international project to piece them back together.

The vessels, from the Roman, Byzantine and Islamic periods, were reconstructed at the world-famous museum’s conservation laboratories, and will be shown as part of its “Shattered Glass of Beirut” showcase, before returning to Lebanon later this year.

“(It) tells a story of near destruction and recovery, of resilience and collaboration,” said Hartwig Fischer, Director of the British Museum.

The vessels were among 74 contained within a case at the American University in Beirut (AUB).

The case fell over when the shockwave of the port blast, which occurred three kilometres (two miles) away on August 4, 2020, hit the building, smashing the glass objects inside.

A team of experts had the daunting task of sorting every shard of glass, deciding if it was part of an ancient vessel, rather than display case, and which vessel it belonged to, Duygu Camurcuoglu, a senior conservator at the British Museum, told AFP.

“It’s all pretty much done by hand or by eye—brainwork basically. You have to know certain techniques to be able to carry out this work,” she added.

Once the pieces had been sorted, the conservators began the mammoth jigsaw-puzzle exercise of reassembling the vessels.

“It’s a case of using an adhesive to reconstruct the vessels,” said Camurcuoglu. But they could not just use anything.

The most challenging vessels were the “large dish and the Byzantine pitcher,” Camurcuoglu recalled.

Eighteen of the vessels have so far been conserved as part of an emergency recovery campaign in Beirut, along with the eight vessels at the British Museum and two that emerged unscathed from the fall.

Experts hope that at least half of the remaining 46 objects in Beirut can be conserved soon too.

The collaborative project between the British Museum and the AUB’s Archaeological Museum began in 2021, following an offer of help from the London institution.

Conservators agreed early on to make the vessels structurally sound but leave imperfections caused by the shattering visible, bearing witness to the explosion.

The exhibition will take visitors on the journey undergone by the glass vessels, from the moment of the blast to their display in the famous London museum.

Lighting will be used in the display to illuminate cracks and gaps in the glass.

“We really wanted to highlight the damage these objects went through, so we can all look at the scars, and remember how they were revived together,” said Camurcuoglu.

The vessels are considered important in telling the story of the development of revolutionary glass-blowing techniques in Lebanon in the 1st century BC, enabling the mass production of glass objects and making them available for common use.

Their restoration, and the teamwork involved, is a source of pride to the conservators, said Camurcuoglu.

“We all individually felt that, I think, we contributed to something by working on these objects — by sharing this pain, these emotions.

“So it’s not only about the conservation… but also the working together and achieving something together,” she added.