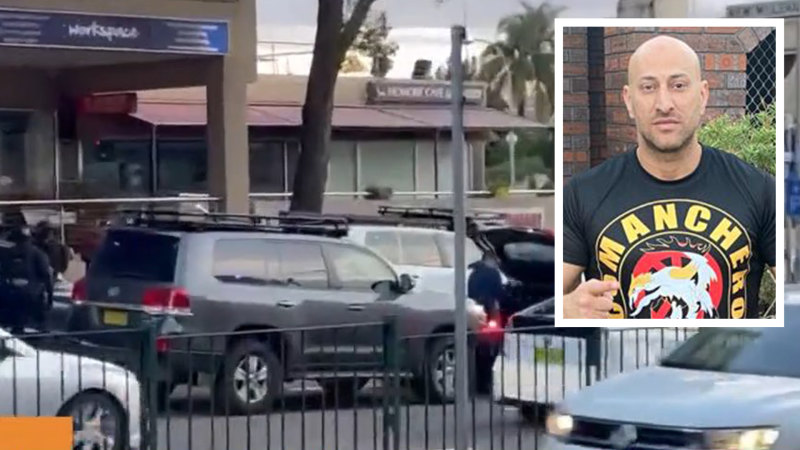 Comanchero bikie heavyweight Tarek Zahed has been arrested in Sydney’s east over an alleged murder, just months after he survived a spray of bullets that killed his brother in a gangland shooting.

A NSW Police spokesman said Zahed, 42, was arrested by the tactical operations unit when they stopped his car on New South Head Road in Edgecliff at about 4.50pm on Sunday.

Footage obtained by Nine News shows police fired tactical rubber bullets into Zahed’s BMW on the busy eastern suburbs road, shattering his windows, before pulling him out of the car.

Zahed was then taken to Surry Hills Police Station, where he was charged over the alleged 2014 murder of 29-year-old Youssef Assoum in Bankstown.

Zahed, a married father of one, survived a targeted shooting at Auburn’s BodyFit gym in May this year despite being struck by 10 bullets in the head, body and legs.

His brother Omar, 39, went into cardiac arrest and died after suffering gunshot wounds to his stomach, arms and legs.

Zahed is the national sergeant-at-arms of the Comanchero bikie gang, while his brother Omar also had links to the gang. Both had been warned by police they were marked men.

National president of the Comanchero, Allan Meehan, posted a picture with Zahed on Instagram last week alongside the caption: “Welcome back tarek “hard2kill” zahed”.

It was the first public image of Zahed to appear since the shooting.