Why suicide loss stories on TV matter: What ‘The Bear’ and ‘Reservation Dogs’ got right 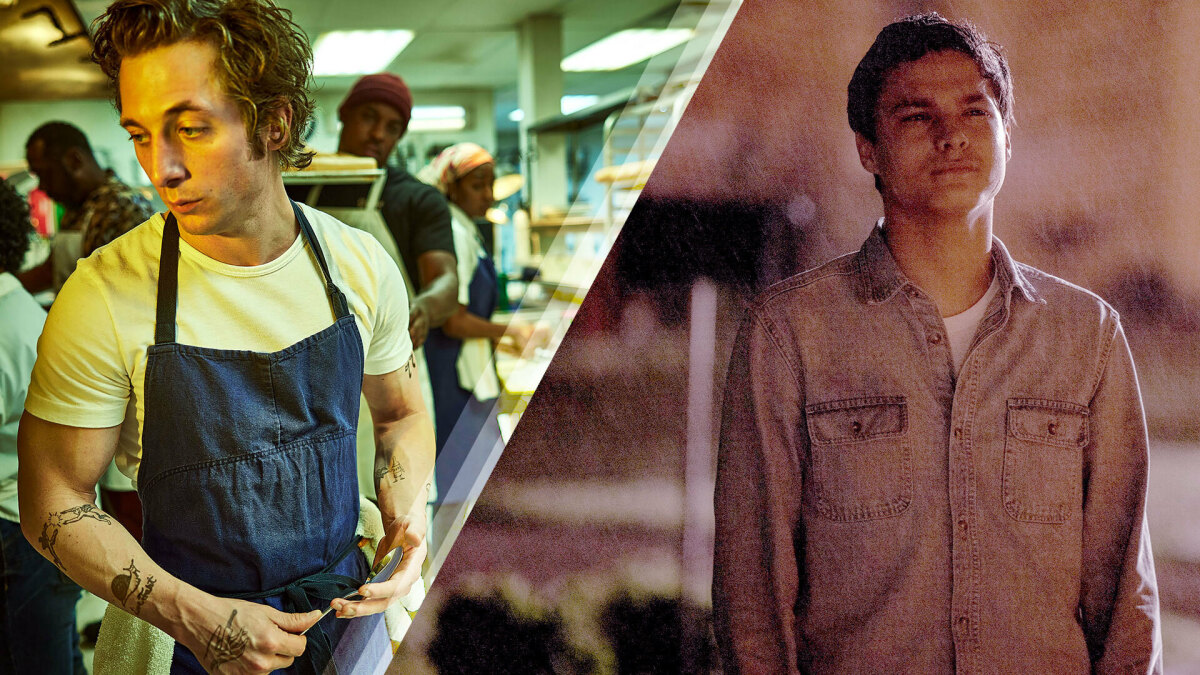 At first glance, The Bear is a show about a gifted chef who comes home to save his family’s Italian sandwich shop in Chicago, following his brother’s death. The intense dramedy, a summer hit on Hulu, is many things at once: a meditation on the grind and joy of cooking, a portrayal of bittersweet relationships, and an unflinching look at both tender and violent masculinity. Surprisingly,The Bear is also about what it means to be a suicide loss survivor.

This last part isn’t advertised. Coverage of the show tends to focus on its authentic take on restaurant life. But nearly every major character is grappling with the grief of losing someone they loved to suicide. That would be Mike (Jon Bernthal), who ran the Original Beef of Chicagoland and left the restaurant to his brother Carmy (Jeremy Allen White).

Stunned by his brother’s suicide, Carmy slowly unravels what he can about the tragedy. Richie (Ebon Moss-Bachrach), Mike’s best friend and his lieutenant at The Beef, mentions addiction. Sorting through Mike’s mess of paperwork, Carmy confronts a mountain of debt. (Both substance use disorders and financial strain are risk factors for suicide.) Throughout the show’s eight-episode debut season, Carmy moves through different registers of grief and guilt familiar to suicide loss survivors.

When Corrie first started watching The Bear, she had no clue it would be about suicide loss. She remembers a review promising a fast-paced tour of a tumultuous kitchen that doubled as a “microcosm of society.”

Corrie, who is using her first name to protect her family’s privacy, lost her 20-year-old son to suicide two years ago. When the nature of Mike’s death was revealed in the first episode, she had to pause. She is judicious about which portrayals of suicide she views.

“It does matter when it’s handled well,” says Corrie, who appreciated The Bear‘s sensitive treatment of suicide. “When it’s depicted in a way that isn’t so shaming and stigmatizing…I watch it, and I don’t feel so alone, or I don’t feel like my kid was so messed up.”

The Bear isn’t the only TV show to incorporate major storylines about suicide loss. The miniseries Mare of Easttown rooted much of the title character’s anguish in the unaddressed grief of her son’s suicide. The second season of Ted Lasso revealed that the title character’s father died by suicide, a turn that brought new complexity to Ted’s insistence on kindness as a way of life. Reservation Dogs, a show about a close-knit group of Native teenagers living on an Oklahoma reservation, is about grief of all kinds, but particularly the sort that affects a community when a young person dies by suicide.

These shows don’t make suicide loss simply a dramatic catalyst for another character’s growth. Instead, they offer textured, empathetic portrayals of surviving a suicide loss. An estimated 5.5. million people are exposed to suicide loss annually in the U.S. Careful storytelling on the topic has the power to reduce stigma for loss survivors, who may encounter judgmental responses or lose friends and family after their loved one dies by suicide.

Brett Wean, director of writing and entertainment outreach at the American Foundation for Suicide Prevention, said that he’s excited by the number of shows taking on the subject of suicide loss.

“Survivors of suicide loss experience different emotions and have their own ways of coping — and these shows have their own unique artistic voices, allowing them to explore this issue in different ways,” Wean wrote in an email.

He particularly appreciates when storylines about suicide aren’t relegated to a single “special” episode only to be forgotten just as quickly. Instead, some of these shows “weave suicide loss and mental health into the ongoing fabric of the characters’ lives.”

Going beyond shame and grief

When the Native writers of Reservation Dogs decided to tell the story of a youth suicide, they brought to the table their own personal experiences of loss, says co-executive producer Tazbah Chavez. The suicide rate for Indigenous people in the U.S. is the highest of any ethnic or racial group. Chavez says the writers signaled certain risk factors, including mental illness, family violence, and historical trauma, but intentionally chose not to assign a single cause for the character Daniel’s death.

Daniel (Dalton Cramer) is mourned by his friends, who assemble a shrine with some of his belongings. They plan a trip to California in his honor. Daniel’s cousin, Willie Jack (Paulina Alexis), talks to a portrait of him on the wall in her family’s home. Some characters think they were the last to see Daniel, and express guilt over what they wished to have done differently. Over time, these characters find solace and support in each other, and no one blames Daniel for taking his own life.

“I guess we just don’t want anyone to feel shamed on either side of it,” says Chavez.

In the second season, now streaming on Hulu, Daniel’s friend Bear (D’Pharaoh Woon-A-Tai) has an unexpectedly humorous exchange in a portable toilet with a Spirit (Dallas Goldtooth) about needing to move on from his grief.

“Get over it? Shit. You haven’t even gone through it, Cvpon,” says the Spirit, using a Muscogee term of affection for “boy”. “We cry for those that we lost. We mourn them, we cut our hair. We cut ourselves. We go through all the feels. We tear ourselves to pieces so that we can build ourselves new on the other side. You go through all of it so that they know that they can go, that we’ll miss them, but that we’ll be okay without them.”

There may be a universal sentiment of sorrow in this exchange, but it’s a much different context than the therapists’ offices where the title characters of Mare of Easttown and Ted Lasso confront their buried grief, or the Al-Anon meeting in The Bear where Carmy gives a wrenching seven-minute monologue about losing his brother first to an unexplained rift and then to suicide.

“Reservation Dogs shows how a whole community of people has been affected, and explores that with great, specific cultural nuance,” Wean said.

While grief drives storylines about suicide loss in Reservation Dogs and The Bear, the shows also make clear that the person who died was complex. This is no small thing for a loss survivor used to one-dimensional portrayals of the deceased.

In both Reservation Dogs and The Bear, Daniel and Mike appear in flashbacks looking happy. Corrie was touched that the major flashback of Mike portrayed him as a joyful man who cooked and joked with his siblings. A tender exchange between Carmy and an Original Beef chef is a poignant reminder that Mike had caring relationships.

“He was really well loved by everybody around him,” says Corrie. “The focus was kind of on that, which I appreciated, and not on his death, which is just something that survivors are constantly battling.”

Lena Heilmann, a suicide loss survivor who hasn’t seen either show yet, would like fictional representations of suicide to incorporate the emotional complexity of what happens after the death. The grief persists, and there can be anger at the person or the circumstances that increased the person’s suicide risk, but there may also be post-traumatic growth, rituals that honor the deceased in loving ways, and newfound happiness as a survivor rebuilds their life.

“One of the things I wish we did better at in all forms of media…is including the happy memories and the love that is part of the grieving process,” says Heilmann.

Heilmann, who lost her sister a decade ago and now works in the Office of Suicide Prevention at the Colorado Department of Public Health and Environment, says that by including the fond memories and enduring love that are integral to grieving, fictional depictions can help people who haven’t experienced a suicide loss be more comfortable with and supportive of loss survivors.

While television writers are treating suicide loss with greater sensitivity, they’re still wrestling with whether to show the death itself. Carmy mentions how his brother died twice, pantomiming it once. Ted Lasso shares with his therapist the memory of discovering his father’s body. Neither series puts the death itself on screen.

This mostly aligns with evidence-based guidelines not to show the death in an effort to reduce contagion that could heighten suicidal thinking and behavior for vulnerable viewers, though the preference is not to describe the method at all. Mare of Easttown and Reservation Dogs both include brief shots of the character’s body. While neither are gratuitous, the method is still clear. (Graphic portrayals can also be hard for loss survivors, who may be at increased risk for suicide following a loss.)

Chavez, who wrote and directed the episode in which Daniel dies, says that the writers wanted to avoid glamorizing or romanticizing the death, or give the impression that suicide would be a “painless…moment of release.” Importantly, Daniel never appears to his loved ones as fully embodied in the current moment, a choice the writers made to avoid leaving young viewers feel like they can die by suicide but still somehow remain present. Yet, Chavez felt showing the death itself was critical to “land the impact” of losing Daniel.

In a visual medium, it can be hard to persuade writers and producers that omitting the method is about responsible storytelling rather than shying away from difficult material, but Wean says it’s possible to reduce contagion without sacrificing artistry.

“These shows help model healthy, open conversations, and let viewers know there is support available for survivors of suicide loss.”

“If they’re genuinely, deeply exploring the topic of suicide loss, the depth of that story isn’t contained in the graphic moments — it’s about what may have preceded them, and the effect they have,” Wean wrote.

He noted that Reservation Dogs‘ overarching sensitivity toward the subject helped balance the explicit albeit brief scene of Daniel’s death, which appears in the seventh episode of the first season, and recurs as a quick flashback in the second season.

In any episode about suicide, Wean recommends including a content warning at the outset and crisis support resources at the end. At the beginning of the episode about Daniel’s death, the show warns about “sensitive material.” The conclusion prompts viewers to “Take action for yourself and be there for others” and provides the number for the 988 Suicide & Crisis Lifeline (formerly known as the National Suicide Prevention Lifeline).

While TV series should follow research-based guidelines about reducing contagion, shows like The Bear, Reservation Dogs, Ted Lasso, and Mare of Easttown are doing critical work by including empathetic portrayals of people who’ve experienced suicide loss.