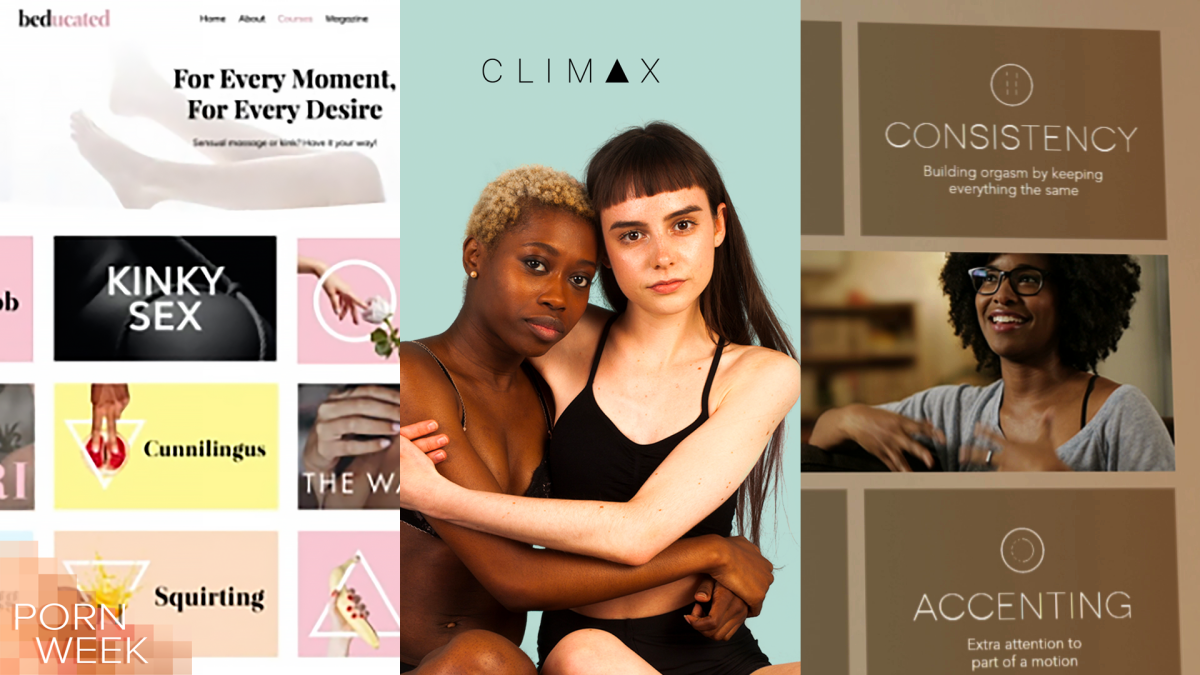 Still from Afterglow’s ‘How to Have Sex Outdoors’ video
Credit: Afterglow

There are various “how to” eduporns to choose from on Afterglow, like how to have sex when you have a disability and how to have sex outdoors. It’s less technical than the subsequent options, but these go into practical tips on exploring sex. There are also some basics, such as “how to hook up” and “how to have sex with a woman.”

Beducated has courses all about sex and intimacy.
Credit: Beducated

Who’s it for: People who want an extensive menu of sexy topics to dig into

Beducated is like a Coursera for sex; there’s a wide range of modules that dive deep into topics, not single videos. When you sign up, you list your sexual interests (and what you don’t want to see, which is a nice touch) and your demographics (age, sexuality, and relationship status). From there, you can explore sections like recommended for you, most popular, and based on interests you picked when signing up.

Climax has a slew of videos to learn more about vulva pleasure and health.
Credit: Climax

Who’s it for: People who want researched approaches to sex and tantra

Climax is a video-based platform that breaks down vulva pleasure techniques based on scientific research. Climax pulled together insights from 74 sexual health and pleasure studies for their first two seasons, on external and internal pleasure respectively. Climax also conducted a survey of around 100 cis women and interviewed sex therapists and tantra teachers. The latter is especially helpful for their third season, all about tantra exercises.

Each season is a series of videos with different pleasure techniques. While not very porn-y, you do see a lot of vulva. For the scientifically inclined, Climax regularly includes statistics from their third-party research and surveys.

Who’s it for: People who want a scientific approach to learning about pleasuring vulvas

In partnership with Indiana University and the Kinsey Institute, OMGYES conducted a large-scale study — a staggering 20,000 women, ages 18 to 95 — to understand specific techniques that are pleasurable to vulvas. These techniques are distilled into three seasons (as of this publication): essentials, inner pleasure, and toy techniques. Within each season are a breakdown of pleasure techniques, with SFW explainer and NSFW demonstration videos and written descriptions. For many of these techniques, there are also research statistics and illustrated diagrams, and sometimes even video stimulations that you can “pleasure” with your computer mouse.

OMGYES has given me names for techniques I myself enjoy, and proves that I’m not alone in techniques. You will see lots of vulvas and breasts, but OMGYES is pretty scientific in nature.

Who’s it for: Straight cis-men or anyone who wants to learn more about vulvas and “sex hacking”

Kenneth Play is a sex educator and “hacker” whose expertise has been cited in Mashable. Sex Hacker Pro has the highest price point of this list and very much geared towards straight cis men learning about how to please their cis women partners. The beginning of the course, for example, goes over vulva anatomy and orgasms. Even if you’re not cishetero, though, there’s plenty of great information here beyond the basics like the neuroscience of sex and how mindfulness plays a part as well.