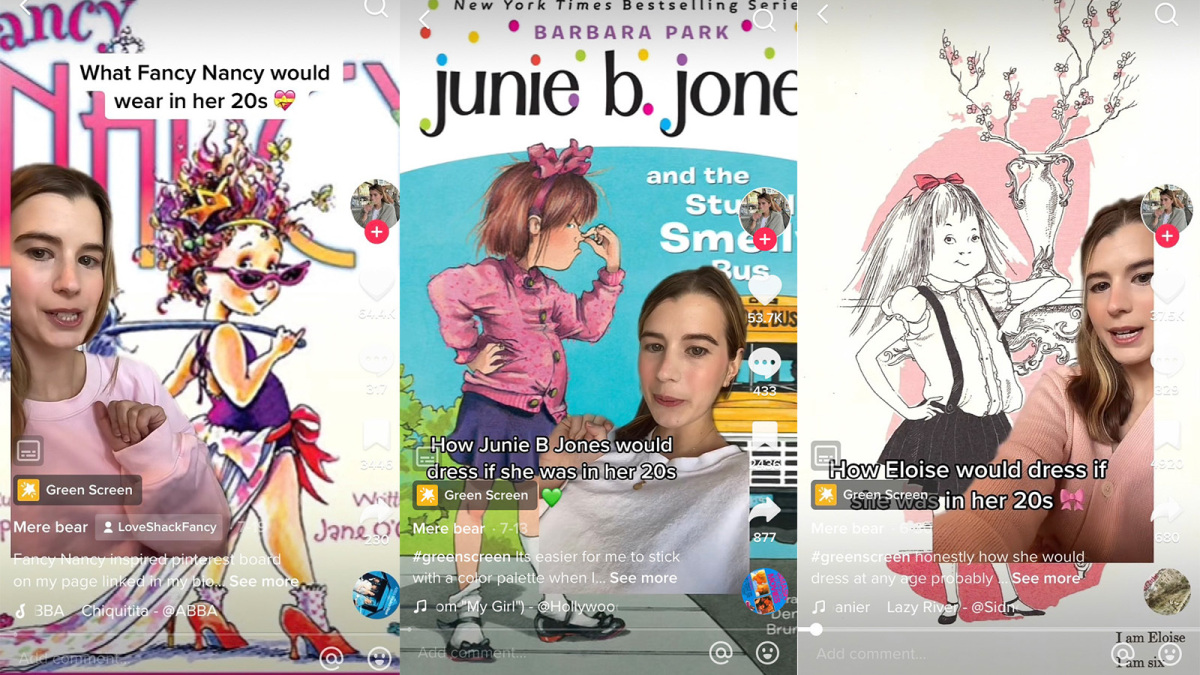 Do you ever wonder how the fictional children from your youth would dress as a twenty-something in our haunted modern times? Lucky for you, 24-year-old Meredith Schmidt is already on it.

On TikTok, Schmidt has been posting a series of videos that delve deep into the imagined adult aesthetics of beloved childhood characters. In June, she uploaded her first video, “How Eloise would dress if she was in her 20s,” and it already has more than 189,000 views and over 37,000 likes. After a taste of virality, she turned it into a regular series. “I’ve always loved Eloise since I was a little girl,” Schmidt tells Mashable. “I remember thinking a couple years ago that I liked her outfit, and that’s kind of stuck in the back of my head. Then I was just scrolling on Pinterest, and I noticed that some things that I pinned recently reminded me of her [style] as a kid but kind of a more grown up version.”

In her “how characters would dress in their 20s” series, Schmidt describes the character’s style in a few words, and then shows a variety of outfits sourced from Pinterest and where that character would wear them to, like picking up dry cleaning or a Saturday night cocktail party. So far, Schmidt has covered Junie B. Jones, Madeline, Fancy Nancy, and the Parker twins from The Parent Trap. She keeps a running list of future characters in her Notes app and often takes recommendations from her comments section. In order to get the details right, she listens to read-along videos on YouTube to brush up on the characters. Her videos have even inspired several copycats, which is the digital marker of a successful trend.

Though, it’s not like we haven’t seen variations of this trend before. During Polyvore’s reign from 2007 to 2018, users created collages and outfit sets for all kinds of fictional characters, celebrities, and situations. There was also the brief “Disney Princesses reimagined as millennials” craze in 2018. However, Schmidt’s videos are unique in that they are distinctly products of TikTok, an app obsessed with “It” girls and aesthetics.

Even though the majority of characters in Schmidt’s videos were not originally written as popular girls in their own stories — they were, for the most part, all disheveled, spunky little freaks — the TikTokker has reimagined them as the ultimate “It” girls by giving them enviable wardrobes and aspirational lifestyles. They’ve effectively been turned into influencers.

Yet, the majority of these characters were written to teach us that being a weird gremlin girl was OK. They were a guide for girls who felt like they didn’t always fit in. From the time I could read until halfway through high school, I looked to works of fiction to figure out how to be a person. Your 20s are a similar period of growth and identity-searching, and there’s something comforting about seeing the characters you idolized growing up reimagined as someone your age. When Schmidt’s Junie B. Jones video appeared on my FYP, I immediately followed her Pinterest board dedicated to Junie B. Jones-inspired outfits. I even bought a sweater similar to the one Schmidt featured on her TikTok.

“I’ve noticed that people have been really investing in their childhood passions recently, so I think people like to see the characters that they loved as a kid and how they can still relate to them and envision them now,” says Schmidt.

The series is part of a larger trend in which pillars of girlhood are being repurposed for internet fodder. Between the American Girl Doll resurgence and the Little Miss memes, fictional young women are always at the top of the internet’s mind, driving culture forward. Most recently, American Girl Doll meme accounts have brought the American Girl Dolls into the modern age by envisioning what each character would think about contemporary pop culture and politics.

Schmidt’s videos also tap into the internet growing fascination with aesthetics as personality traits. So far, she’s turned several iconic childhood characters into aesthetics, posting videos like “Eloise inspired beds” and “Grown up Madeline’s home style.” With Schmidt’s direction, you could build your entire life around the imagined aesthetic of a chapter book heroine.

The comments on Schmidt’s original Eloise video read, “Eloise core!!! Didn’t know I needed it till I had it,” (adding “-core” to the end of something transforms it into an aesthetic, i.e. cottagecore) and “My goal in life is to be as chic as Eloise.”

On TikTok, a new “aesthetic” materializes every week. Last year, it was dark academia; now, everyone is obsessed with the fuschia-soaked Barbiecore. On the internet your aesthetic is a combination of your identity, your personal style, and your spheres of interest. Aesthetics encourage young women to build their lives around an easily readable (and marketable) cohesive vision. If you’re in pursuit of a certain aesthetic, you’re tasked with constantly curating your life (and feeds).

TikTok creators like Schmidt post videos of their hyper-specific aesthetic finds and other inspirational content in order to tap into a larger trend. “In simple terms, aesthetics help form identity,” Schmidt says. But keeping up with trending aesthetics and tending to your own is exhausting. Instead of living your best Madeline-inspired in Paris, you’re forced to keep searching for your next identity-affirming purchase.