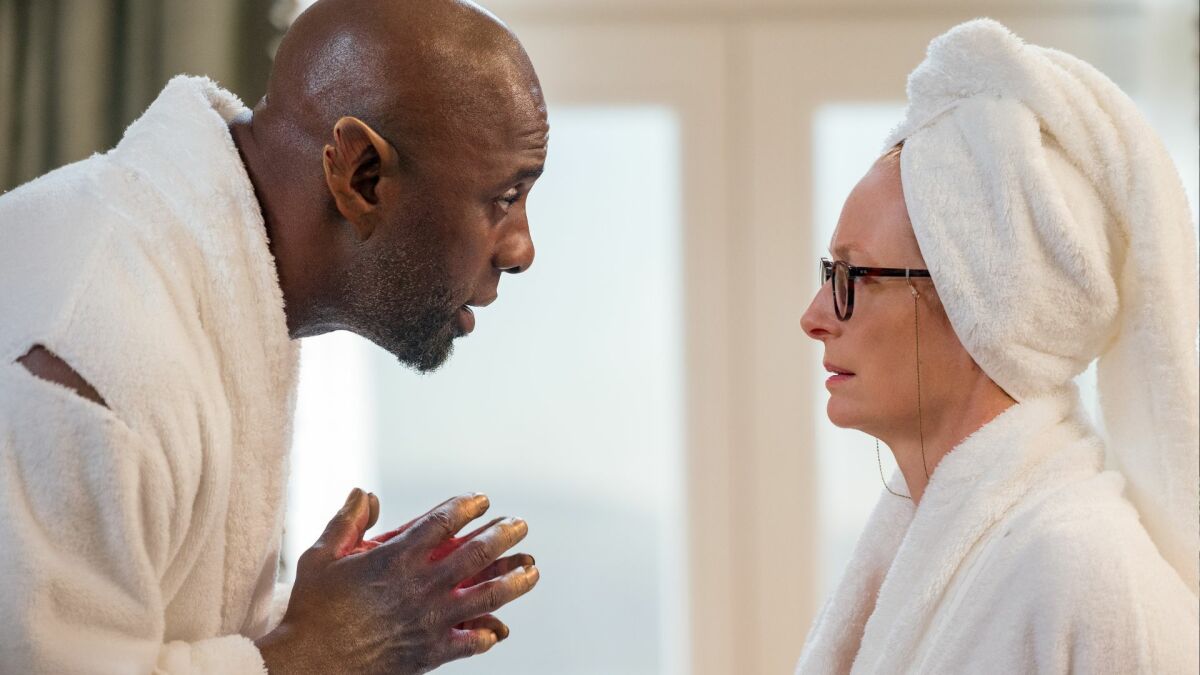 George Miller has awed audiences with the adorable Babe: Pig in the City, the toe-tapping musical Happy Feet, and the eye-popping action epic Mad Max: Fury Road. But with his latest film, the visionary filmmaker who’s made us root for plucky porcine protagonists and snarling rogues has made major missteps. Starring Idris Elba and Tilda Swinton, Three Thousand Years of Longing is meant to be a rapturous romance all tied up with a luscious ribbon of fantasy and magic. But in the end, it proves a harrowing horror story, unaware of how its perspective — rooted in privilege and racism — disintegrates its love story.

Co-written and directed by Miller, Three Thousand Years of Longing centers on a white English woman named Alithea Binnie (Swinton). With a crisp red bob of hair, bold circular glasses, and sharp yet brightly colored outerwear, she seems to have skipped out of the twee worlds of Wes Anderson (a realm with which Swinton is familiar). In her bouncy narration, she invites the audience into her story as if narrating a children’s fairytale, but don’t be deceived. Though not even Miller seems aware, Alithea is the villain of this tale.

She introduces herself as a solitary but happy narratologist, an academic whose life centers around stories (and stories about stories), and she relishes traveling for work to “strange lands” like “China, the South Seas, and…the Levant.” Alithea’s instant othering of the East, including Istanbul, where her story begins, is an early red flag. As a collector of stories, she claims to seek the universal truths within them, but she undercuts the humanizing effect of her studies by exoticizing their lands of origin, imagining herself as an insightful adventurer for recognizing their wonders.

Like the English colonizers before her, Alithea strolls about these foreign lands with an eye toward acquisition, specifically of stories and a pivotal treasure. As “musky” and magical figures appear only to her, the film suggests she has a superior ability to recognize the extraordinary, which is confirmed at the Grand Bazaar when she finds a scorched glass lamp buried in a pile of trinkets. Both her Turkish colleague and the shopkeeper try to urge her toward a prettier item, but she declares firmly,  “I like it. Whatever it is, I’m sure it has an interesting story.” The film suggests she — a tourist — was uniquely fated to find this lamp. When she cleans it with an electric toothbrush, behold! A mighty and massive Djinn (Elba) bursts forth, filling her hotel room with his broad Black shoulders and gold-tipped toes.

The Djinn, who is never given a name, explains he is curse-bound to the bottle until he successfully grants three wishes to its owner. Dubious of him because of all the stories she knows of trickster Djinn, the narratologist asks for his life story. But does he even want to share these stories, or does the Djinn feel obligated because of the power she holds in the palm of her hand? If she opts not to wish, he’s caught in a grim limbo of waiting, which he describes as “the closest [Djinn] ever come to death.”  So, best to appease his latest master by pouring out his heart.

The Djinn in one of his tragic tales.
Credit: Metro Goldwyn Mayer Pictures Inc.

Miller and his co-writer Augusta Gore adapted Three Thousand Years of Longing from the novella-length story in English novelist A.S. Byatt’s short story collection The Djinn in the Nightingale’s Eye; both the source text and the script are heavily influenced by One Thousand and One Nights. The collection of Middle Eastern folklore is re-imagined through the Djinn’s tales. Aladdin becomes a pregnant peasant besotted with a prince. The prolific storyteller Scheherazade is now an old man whose tales enchant a restless royal tyrant. Also folded in is the Queen of Sheba from the Hebrew Bible, imagined here as a gorgeous and slender Black queen (Aamito Lagum) with a signature “thick glade of black hair on her legs.”

In a clumsy (albeit beautiful) mosaic of folklore, costumes, creatures, tribal masks, and dance, Miller flattens a variety of Eastern cultures in an apparent effort to appeal to Western audiences. The film’s Orientalism has been condemned on Twitter and in Javier Zurro’s review for being offensive and achingly old-fashioned. Miller has frustratingly undercut the many Middle Eastern characters within the Djinn’s flashbacks by making most of the characters almost speechless, as the Djinn’s narration runs over whatever they might say. Far from well-rounded, these are papyrus-thin characterizations of lust, pride, betrayal, and madness. Such damaging portrayals of Middle Easterners are further othering, painting them as barbaric stereotypes when compared to crisp and clever Alithea, the would-be White Savior of the enslaved Djinn. But even that problematic trope is too good for her.

All Alithea has to do to release the Djinn from the bondage of his bottle is to make three heartfelt wishes. After hearing his stories of loss and love, she has only one desire. “I need to love you,” she tells the Djinn. “I wish for you to love me in return.”

He’s told her the stories of his love for Sheba, the most beautiful woman in the world, and Zefir, an unparalleled genius. And Alithea wants to be loved by him as they were, declaring, “I want our solitudes to be together. I want that love professed in ageless tales.” He loved those women freely, yet here she commands his love with a wish.

Three Thousand Years of Longing gives no indication that the Djinn has the power to refuse a wish. And even if he technically could, is he in a position to do so when denying her would put him in eternal purgatory? “If you make no wish at all,” he has warned her, “I will be caught in between worlds, invisible and alone for all time.”

Despite its fantastical flare, the horrid power dynamic at play is that of an enslaved person and a slave master. Sure, the Djinn is muscle-bound and wields powerful magic that can make the wildest wishes come true. But being bound to the bottle by the desires of his master means he is shackled from making his own decisions. For all her primness, Alithea is in control here. This Black man is a literal prisoner to this white woman’s whims. Throughout the film, he entreats her to kindness with food, interest, stories, and — when she wishes for it — sex. But his consent is compromised by the imbalance of power and privilege. When she asks him to come with her to London, his answer is not shown. Instead, the film cuts to her smuggling his bottle through TSA for the flight to England. The Djinn’s consent is beside the point.

Alithea is an educated white woman from the UK who has wealth, standing, and the ability to travel as she likes. A brief and unpleasant scene with her older, white neighbors, a pair of bickering “bigots,” is meant to paint Alithea as an ally simply because she doesn’t openly complain about so-called “ethnics” as they do. Yet she treats the Djinn as a possession. When she brings him home to her flat, she doesn’t set his bottle on her bed, where he might sleep, or in a room where he might stretch out to his natural massive size. She places his glittering prison on a shelf alongside glass trinkets, as if he’s a shiny new addition to her decor.

Both characters describe themselves as prisoners. But he is imprisoned by the bottle, forced to spend eons at the bottom of the sea or lodged in a castle’s forgotten crevices. Meanwhile, she insensitively calls her first marriage a prison, reveling in how free she felt upon divorce. It seems she’d relate to the tale of the Djinn’s genius lover, Zefir, whose husband he described as “kind if you think keeping someone in a cage like a bird is kind.” However, Alithea hardly hesitates to trap the Djinn in a similarly gilded cage, though the one she puts him in is arguably worse since the electromagnetic waves of modern technology tear Djinn to fiery pieces. (That these waves didn’t impact him in Istanbul is a curious move on Miller’s part. Does he think they don’t have cell phones or wifi there?)

Alithea almost realizes she’s the bad guy in this fable.

Exposed for prolonged periods to the electromagnetic waves that humans take for granted, the Djinn’s very cells are being turned from “subtle fire” to dust. He’s literally crumbling before her eyes.  Yet when she wishes him to speak, he spins into a litany of placations, inviting her on a picnic and promising “the best time of our lives.” Watching him in agony still resolute to please her, Alithea realizes this is the consequence of her colonizing actions.

“Love is a gift of one’s self, given freely,” she says to the Djinn, “It’s not something one could ever ask for. I tricked us both. The moment I spoke that wish, I took away your power to grant it. I, more than anybody else, should have known that.”

Her intellectual arrogance aside, Alithea recognizes that her wish robbed the Djinn of choosing their romance. Faced with his literal disintegration, she makes her third wish to send him wherever he belongs. This might have been a moment to reflect on the horror of her wish and its lesson. Instead, the film swans into a dreamy epilogue, where she has learned nothing.

The twee sensibility returns, along with the colonizer viewpoint. Cut to three years later: Alithea is happy, scribbling her story into a book, waiting for the Djinn to return to her. And he does, on a sunny day in a public park. At first, you might think (or even wish) he’s in her imagination, like the dream boy, Enzo, she manifested in her lonely youth. However, that possibility is smashed when the Djinn kicks a soccer ball, jovially interacting with other park-goers. Without a doubt, he is here. He is real. And he is really continuing a romance with the enslaver who treated his heart and soul like a tchotchke.

“He would visit from time to time, and they would grasp each and every moment,” Alithea’s final voiceover swoons. “Despite the pain of the raucous skies, he always stayed longer than he should, long after she begged he should leave. He promised to return in her lifetime, and for her that was more than enough.”

This final passage confirms that Three Thousand Years of Longing sees both these characters as fools for love, paralleled in longing and solitude — but not sacrifice. Alithea’s sentimental conclusion frames their romance as something the Djinn had a choice in and ultimately desires, even if it hurts him. Then, true to her selfish streak, she ends by noting that her desires are most important with some live-laugh-love, white woman nonsense as they literally walk off into the sunset together.

Three Thousand Years of Longing shows a brazen disrespect for other cultures when Djinn cherry-picks the bits of their stories that appealed without considering their greater significance or context. Its heroine does the same with the Djinn, ultimately relegating him to a thing that happened to her on her travels to “strange lands.” Her belief that all stories belong to all mankind ruthlessly ignores how a story might be twisted by the perspective of a colonizer who sees everything as theirs for the taking, consequences be damned. In the end, it’s not the colonizer who’s destroyed, but the very treasure they claim to be appreciating. So in the end, Three Thousand Years of Longing is not a tale of epic romance, but one of enduring racism.

Three Thousand Years of Longing is now in theaters.