The most watched TV and movies of the week: ‘House of the Dragon’ soars to the top 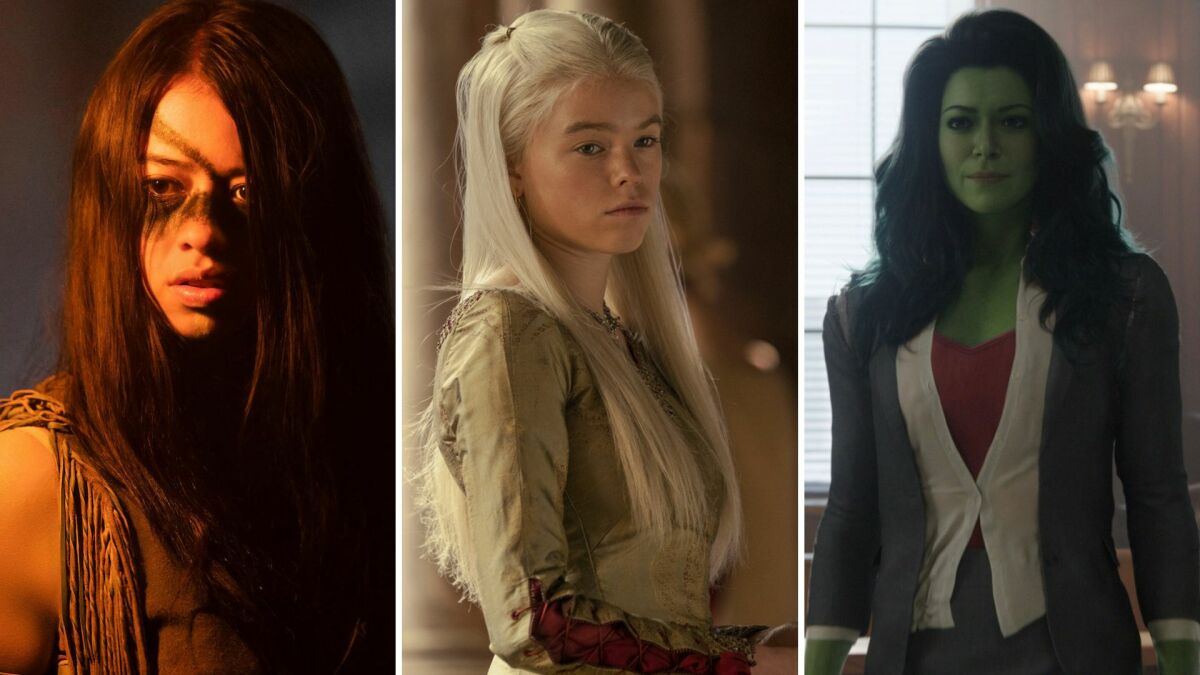 So, what’s everyone been watching this week? Hmmmm?

Just to get a sense of what everyone’s streaming, we’ve used data from streaming aggregator Reelgood, which gathers viewership numbers from hundreds of streaming services in the U.S. and UK. Each week, the most streamed TV shows and movies come down to a few elements — sheer buzz, a big finale, smart marketing, star power, critical acclaim, or word-of-mouth that leads uninterested people to finally watch it out of spite.

This week, it’s all about House of the Dragon. The Game of Thrones prequel shot to the top of our list, surprising nobody after a massive premiere. Marvel’s She-Hulk: Attorney At Law also had a strong debut. Other newcomers to the list include horror films like Orphan: First Kill and The Black Phone.

But just because a lot of people are watching something doesn’t make it…good. Here they are, the 10 most streamed TV shows and movies of the week, where to watch them, and what Mashable critics thought.

Feels good to be back.
Credit: Ollie Upton/HBO

There is simply no denying the power of Game of Thrones, a franchise that has roared back into our lives with the release of prequel series House of the Dragon. Taking place nearly 200 years before Jon Snow and Daenerys Targaryen existed, House of the Dragon follows House Targaryen at the height of its power in Westeros. There’s just one small problem: King Viserys (Paddy Considine) doesn’t have a male heir. With the line of succession in question, you can bet on scheming, bloodshed, and mayhem. Oh, and many, many dragons. Let fire and blood reign! — Belen Edwards, Entertainment Reporter

Who’s who in ‘House of the Dragon’: The Targaryen family tree

What we thought: If you’re worried about House of the Dragon after getting burned by the final season of Game of Thrones, don’t be. HBO’s epic new series is excellent through and through, juggling memorable characters, high fantasy, and intense emotions with practiced ease. You’ll be sucked in faster than you can say “Dracarys.” — B.E.

How to watch: House of the Dragon is now streaming on HBO Max. New episodes premiere Sundays at 9 p.m. ET.

Permission to Hulk out, your Honor?
Credit: Marvel Studios

The newest hero to burst into the MCU is Jennifer Walters, aka She-Hulk (Tatiana Maslany). She’s a lawyer who just happens to be a Hulk, but she’d much rather do good through the legal system than through smashing things. As Jennifer grapples with life, love, and pressing questions about Captain America, she’ll team up with MCU mainstays like her cousin Bruce Banner (Mark Ruffalo) and Wong (Benedict Wong). It’s a fun time all around, and Maslany is as charming as humanly possible in her double role. — B.E.

What we thought: She-Hulk: Attorney at Law is unlike any Marvel show we’ve seen before. Yes, it’s the story of a hero — Jennifer Walters, aka She-Hulk (Tatiana Maslany) — discovering their powers. But this half-hour comedy about a lawyer-turned-Hulk has just as much in common with Ally McBeal or Legally Blonde as it does with WandaVision or Ms. Marvel. It’s a smaller-scale take on the MCU with an irreverent, self-referential tone, making for a refreshing change of pace from the MCU’s other TV offerings. — B.E.

How to watch: She-Hulk: Attorney At Law is now streaming on Disney+, with new episodes every Thursday.

Director Dan Trachtenberg’s Predator prequel still has huge buzz nearly a month after hitting Hulu. Set in 1719 in the Comanche Nation, Prey is all about Naru (Amber Midthunder), a skilled warrior and hunter whose community is threatened by an advanced alien (yep) predator. So, she sets out to confront it in one hell of a showdown. — Shannon Connellan, UK Editor

What we thought: With spectacular action, compelling characters, and an engrossing story, Prey absolutely deserves the hype that comes with a large audience. It’s a crime that it isn’t getting a theatrical release, but do not think for a second that this is a case of a studio dumping a mediocre film direct to streaming. — B.E.

There’s something wrong with Esther… again. Isabelle Fuhrman reprises her role from 2009’s Orphan in this prequel that takes us deep into Esther’s twisted origin story. Julia Stiles and Rossif Sutherland join Furhman as the couple who adopts Esther, but just as in Orphan, their lives take a turn for the horrific pretty quickly. — B.E.

What we thought: This sinister sequel can’t compare to its older sister flick, but it’s not without its own ghoulish goodies. Fuhrman is wickedly entertaining in her repulsive reprisal. The turnabout of concept and tone is clever, shifting from a retread of Orphan to a re-imagining of its titular terror with a knowing wink and an unapologetic thirst for chaos.  — Kristy Puchko, Film Editor

How to watch: Orphan: First Kill is now streaming on Paramount+.

Better Call Saul has concluded forever, with the series finale airing after six seasons. So people are naturally streaming the hell out of it. In Vince Gilligan’s Breaking Bad prequel, Bob Odenkirk takes on the titular role of Albuquerque lawyer Jimmy McGill aka Saul Goodman, joined by the ever-talented Rhea Seehorn as dynamite lawyer Kim Wexler, Giancarlo Esposito as formidable drug distributor Gus Fring, and Jonathan Banks as everyone’s favourite fixer Mike Ehrmantraut. Of course, along the way he meets Walter White (Bryan Cranston) and Jesse Pinkman (Aaron Paul), but you’ll have to watch to find out how. — S.C.

What we thought: For several key players, the stakes have never been higher. Reputations, relationships, and lives are on the line, and mounting tension in the first two episodes alone exposes seldom-seen sides of characters we thought we had all figured out. — Nicole Gallucci, former Senior Editor

Mister Sandman, on his way to Hell.
Credit: Netflix

Neil Gaiman’s The Sandman is dominating streaming sessions right now. The 10-episode comic adaptation from showrunner Allan Heinberg journeys through worlds, human and otherwise, primarily hinging on the exploits of Morpheus, the Dream King (Tom Sturridge). When Morpheus is captured by mortals and his sacred objects stolen, terrible things begin to happen both in our world and realms of fantasy.

5 ways Netflix’s ‘The Sandman’ is different from the comics

But this just means we get to meet a whole range of weird and wonderful characters, from Kirby Howell-Baptiste as Death; Gwendoline Christie as Lucifer; Vivienne Acheampong as the librarian Lucienne; Jenna Coleman as the kickass Johanna Constantine; Sanjeev Bhaskar and Asim Chaudhry as murder-bound brothers Cain and Abel; David Thewlis as the exceptionally creepy John Dee; and so many more. — S.C.

What we thought: If you’ve been dreaming of a perfect onscreen version of Neil Gaiman’s The Sandman, you’re going to have to dream a bit longer, and a bit harder. Netflix’s take on the brilliant comic book series has its moments of excellence, but it also suffers from uneven pacing and mountains of exposition. — B.E.

How to watch: The Sandman(opens in a new tab) is now streaming on Netflix.

Vampires do not see Jamie Foxx coming in Day Shift, a new action thriller from John Wick stuntman J.J. Perry in his directorial debut. Foxx plays Bud Jablonski, who uses a pool cleaning job to cover up the fact that he’s part of an international union of vampire hunters — two of which are played by Snoop Dogg and Dave Franco. if you’re looking for a big action movie with vampires and big names, give it a spin. — S.C.

How to watch: Day Shift (opens in a new tab)is now streaming on Netflix.

The mask that launched a thousand nightmares.
Credit: Universal Pictures

Ethan Hawke terrifies in The Black Phone, a horror flick based on a short story by Joe Hill. Hawke plays the Grabber, a part-time magician who kidnaps boys and keeps them locked in his basement. His latest victim? 13-year-old Finney (Mason Thames), a frightened child whose ordeal brings him face to face with the dead: Finney is able to communicate with the Grabber’s previous victims through a phone in the basement. Will this lifeline — or maybe deathline is more accurate — be enough to save him? — B.E.

What we thought: The Black Phone feels like a miss almost across the board. For years, Hill has been forging his own brand of horror with books and interesting adaptations (Horns, NOS4A2, Locke & Key). This is the weakest yet. A story that feels like he was playing in his father’s sandbox to create, trying to formulate something grittier and his own, is puffed up with cheap ’70s nostalgia for suburban naivete, old-school technology, and a more casual attitude toward kids cursing and hurling slurs. — K.P.

How to watch: The Black Phone is now streaming on Peacock.

We’ve got a twin situation on our hands.
Credit: Jackson Lee Davis/Netflix

The classic “twin swap” trope gets a psychological thriller twist in Netflix’s Echoes. Michelle Monaghan plays Leni and Gina, two twins who have swapped lives since childhood. When one of them goes missing, their double act threatens to get entirely exposed. There are twists, there are turns, and there are twin shenanigans of the silliest degree. — B.E.

How to watch: Echoes is now streaming on Netflix.

Mabel on the trail of a killer.
Credit: Hulu

Well, things didn’t work out quite like they thought for our three podcasting heroes at the end of Season 1 of Only Murders in the Building, and Season 2 plunges them into a whole new mystery at the Arconia.

Is the liverwurst and marmalade sandwich from ‘Only Murders in the Building’ Season 2 as good as it sounds?

Martin Short, Steve Martin, and Selena Gomez are back as Oliver Putnam, Charles-Haden Savage, and Mabel Mora, three true crime podcast superfans and neighbors in a fancy Upper West Side apartment building who become entangled in each other’s lives after murder comes a-knocking. In Season 2, Cara Delevingne joins the cast as artist and gallerist Alice, and Amy Schumer (as herself) moves into Sting’s apartment. There are some big questions this time around: Who is Glitter Guy? And why is everyone always wearing sweaters? — S.C.

What we thought: Only Murders feels fundamentally messier in Season 2. We’re learning more about the OMITB hosts; we’re learning about their various neighbors; and we’re getting to know a number of new arrivals alongside the rest. It’s great stuff from a people perspective. But too often, that character-forward approach leaves the mystery, and by extension the whodunit puzzle we try to solve at home, to languish. — Adam Rosenberg, former Senior Entertainment Reporter

* Asterisks indicate the writeup is adapted from another Mashable article.