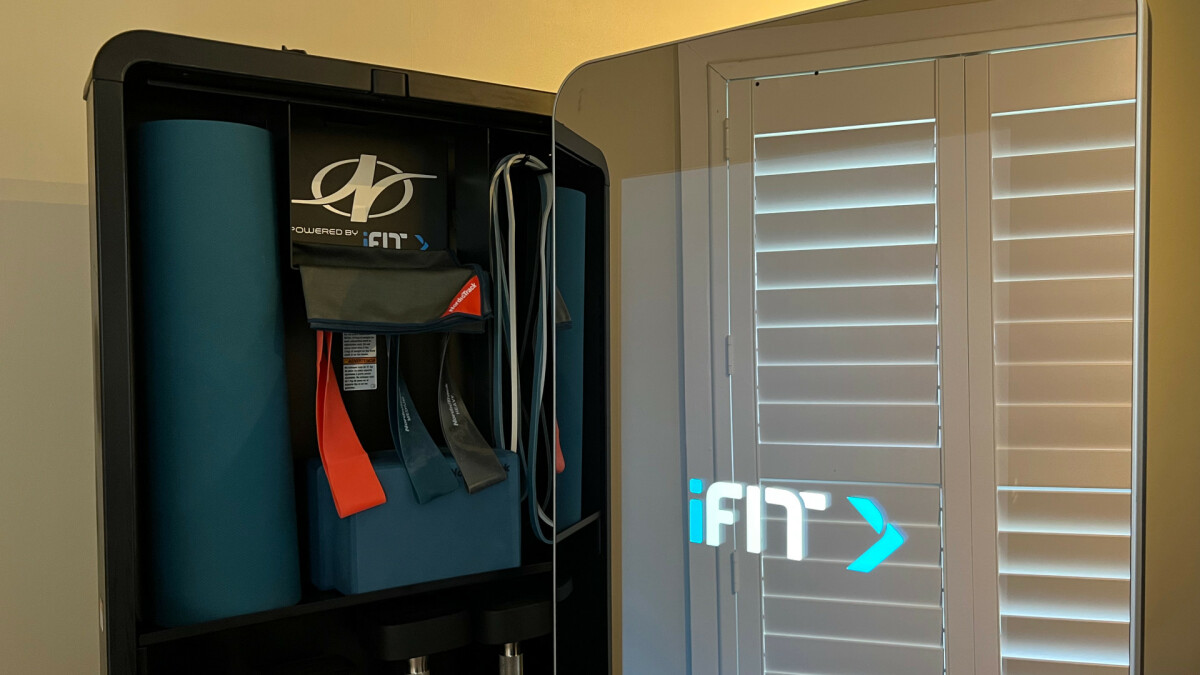 I really wanted to love the NordicTrack Vault(opens in a new tab).

It’s an alluring concept. A fully-equipped home workout station, complete with instructors to guide you and a mirror to help you evaluate your form, all tucked into a relatively compact cupboard. As someone who prefers to avoid being perceived in any way, having such a resource at my disposal seemed like a welcome alternative to a gym membership.

Unfortunately, the NordicTrack Vault wasn’t quite the fitness wonderland I’d hoped for. Rather, it felt like being set up on a blind date with a millionaire only to find out his millions are in crypto assets.

What is the NordicTrack Vault?

Billed as the “complete iFit connected home gym,” the $1,499 NordicTrack Vault is, at its most basic, a cupboard with a screen on its mirrored door. This screen provides access to the iFit fitness app, which offers a wide variety of workout routines for you to follow. For an extra $500, the cupboard will also come full of weights and exercise equipment to use during these workouts.

Overall, the Vault’s construction is sturdy enough. The cupboard itself is a little over nine inches thick including the door, which is about 22.5 inches wide and 69 inches tall. This stands on a heavy metal base measuring approximately 22.75 x 32.25 inches, which stabilizes the entire Vault enough that I didn’t fear being crushed in the middle of a particularly vigorous jumping jack.

The mirrored door is hinged on the right, but can also swivel so its surface faces the front or left. This means there doesn’t necessarily have to be enough room to work out directly in front of the Vault, opening up your options regarding where you can place it. This is particularly helpful considering it’s heavy enough that you won’t be moving it around a lot. It’s also a feature not found on the Vault’s biggest competitors.

Aside from the black speaker strip along the bottom, the entire door is reflective. The portrait touchscreen doesn’t cover this whole surface though, measuring just 31 inches and mounted high on the door. This is fine if you’re doing standing workouts, but following a floor work routine will leave you painfully straining your neck to look up at the instructor.

Setup was straightforward enough, requiring me to connect to WiFi and log in to my iFit account. However I found the NordicTrack Vault screen’s response time lacking, with load screens long enough that flipping carelessly through workouts was neither an enjoyable nor practical proposition. In fact, the six to seven seconds of waiting around between each screen irritated me enough that I was disinclined to use the NordicTrack Vault at all. This wasn’t helped by its mildly disappointing screen resolution and audio quality, which would be best described as adequate.

While you can use your own exercise equipment to follow iFit’s workouts, the $1,999 NordicTrack Vault Complete(opens in a new tab) comes stocked with a selection of weights, kettlebells, resistance bands, and yoga blocks, plus an exercise mat and cleaning towel.

The lightest set of dumbbells weigh five pounds each, which already feels heavier than my weak, tissue-paper arms can manage for more than a minute. I can’t envisage an imminent future where I could heft the Vault’s 30-pound weights with ease, but perhaps NordicTrack believes in me more than I do myself.

In any case, the NordicTrack Vault’s gear seems more appropriate for users who aren’t complete fitness beginners. To be fair, it isn’t an unreasonable assumption for NordicTrack to make. If you’re the type of person who would drop several thousand dollars for a Vault, this probably isn’t your first foray into fitness.

Still, if you’re new to the scene and were hoping the financial investment would incentivize you to actually perform a crunch or two, you may find NordicTrack’s weights more discouraging than motivating.

However, the most baffling aspect of the NordicTrack Vault was its deliberately nonfunctional camera.

NordicTrack doesn’t draw attention to the Vault’s camera in any of the promotional imagery on its website, so it was a surprise to see one so visibly displayed near the top of the equipment when it arrived. Set into the mirrored door’s surface, the camera lens makes the Vault’s front look even more like an oversized smartphone than it already did. It’s always disconcerting to find a camera where one wasn’t expected, but even more so when it’s on expensive tech designed to assist you in private, unflattering moments.

To be clear, the NordicTrack Vault does not watch you while you’re struggling through your exercise routine. In fact, the Vault’s camera is apparently completely non-operational. According to a NordicTrack spokesperson, the lens is only there because the tablets used in the doors are bought from a separate supplier, rather than made specifically for the Vault.

The result is that the Vault feels more like a prototype than a finished product. It certainly isn’t the premium product you’d expect for its price point. This became particularly noticeable when an unsightly foggy webbing pattern took over part of my screen, which I presume was a reaction to the high humidity in my area.

On one hand, it’s good to know there’s no nosy NordicTrack technician shoveling down popcorn and judging your form somewhere. Between smart speakers and targeted advertising that always seems to know too much, privacy is already a significant concern in tech. One less functional camera lurking in your home may offer some measure of comfort.

On the other, the ability to track a workout and correct your form seems like the least you could ask from a $1,499 mirror cupboard. Microsoft’s $150 Xbox Kinect camera had this functionality back in 2010, using its sensor to track players’ movements in games such as popular rhythm title Just Dance. Form correction is also a feature in Mirror and Tempo, which are similarly priced to the Vault.

It also just doesn’t feel good to have a camera hanging out on the top of your mirror. NordicTrack may say they aren’t using it, but if the entire lens is still there, what’s to say that other hackable camera components aren’t as well?

The Vault’s main attraction is its iFit(opens in a new tab) connectivity. Like Apple Fitness or the Peloton app, iFit is a subscription-based fitness app which offers a wide selection of workout videos you can follow, ranging from HIIT, to yoga, to strength training. While you technically can use the Vault without the iFit subscription, the number of free workouts will be limited and the algorithm will no longer recommend you workouts based on your past activity.

Also like the Peloton app, iFit doesn’t require specialized equipment to use. In fact, you could simply grab the Android or iOS app and follow its workouts on your phone, tablet, or television if you felt so inclined. iFit offers a 30-day free trial regardless of which of these platforms you opt for, with the individual subscription subsequently costing $180 per year.

A new NordicTrack Vault does come with a one-year family plan iFit membership, which would otherwise set you back $396. Even so, it doesn’t feel like a good deal considering you could get the same experience by subscribing to the iFit app, picking up some cheap weights off Craigslist, and working out in front of a mirror.

Doing so may even be less frustrating than dealing with the Vault. As mentioned above, I found navigating through iFit’s menus and conducting searches on the Vault aggravating due to the significant load time. However once they did load, workouts weren’t necessarily worth the wait.

In fact, it felt like iFit was determined to throw me as many obstacles to actually exercising as possible. More than once I tapped on a series labeled “beginner,” only to find it full of intermediate workouts. Even when I did find beginner workouts, they certainly felt more like intermediate.

I could filter workouts through categories such as the area I wanted to target, intensity, and equipment used, but the results were confusing. Having a screen full of workouts labeled “Strength Training 101 — Workout 1,” “Foundations of Strength Training — Wk 1 Wkt 1,” “Total Body” and “Total-Body Focus” isn’t actually all that helpful when trying to figure out where to start.

Workouts themselves start with an uninspiring black screen and three minute countdown, during which you’re supposed to warm up yourself with no guidance. If you’re lucky, you’ll get music from some artist you’ve probably never heard of. If not, you’ll get dead existential silence as the timer ticks down. (This could be a glitch, but either way it will certainly have you contemplating your existence.) It’s at this point that many beginners would pick up their phone and search YouTube for exercise videos.

Yet once the countdown is over, that doesn’t necessarily mean the workout immediately starts. Some instructors will stand around talking about working out for a while, or showing you sweeping shots of the Bahamas while your body cools back down.

The music can also be jarring at times, with iFit pairing a rap-scored warmup timer with a more relaxing yoga workout at least once. One ab workout I tried had no music at all, with the instructor exercising in a silent black void. Everything feels chaotic, from the lack of a labeling convention, to the incongruous music, to the disparate settings, as though iFit’s trainers have no shared affiliation. Very different from the influencer-like instructors at Peloton.

iFit workouts do have a running calorie counter both on the Vault and in the mobile app, however it’s simply a calculation based on stats such as your age and weight. Rather than using a camera to track you, it just assumes that you’re following the instructor correctly, meaning the counter will dutifully tick up at the same rate regardless of whether you’re vigorously exercising or lying face down on the floor. By comparison, the Peloton Guide at least detects whether you’re moving.

Unfortunately, I just couldn’t find the value in iFit’s software and workouts. The recommendation algorithm didn’t provide significant enough benefit to justify subscribing, and everything else around it just didn’t feel good or intuitive to use.

Is the NordicTrack Vault worth it?

I’ve been racking my brain to try to determine exactly who might enjoy and benefit from adding the NordicTrack Vault(opens in a new tab) to their home. The best I can figure is someone who does regular strength workouts but doesn’t have their own set of weights, requires guidance, and has a lot of disposable income to spend. And isn’t irritated by slow touchscreens.

But even then, the $1,995 Tempo Studio would be a better investment if you’re looking for a fitness mirror. Both are the same price inclusive of exercise equipment, but unlike the NordicTrack Vault, the Tempo senses and corrects your form. If you already have your own equipment, the basic $1,495 Mirror is another option, as its camera can be utilized if you pay an additional fee for personal training. Further, for those wealthy enough not to look at prices when they go to out to eat, the $3,495 Tonal both corrects your form and does an initial strength assessment to help you get started.

The NordicTrack Vault is a cool talking piece, and handy storage for exercise equipment. But overall, I can’t recommend it to the average person.