How problematic is bi pornography? 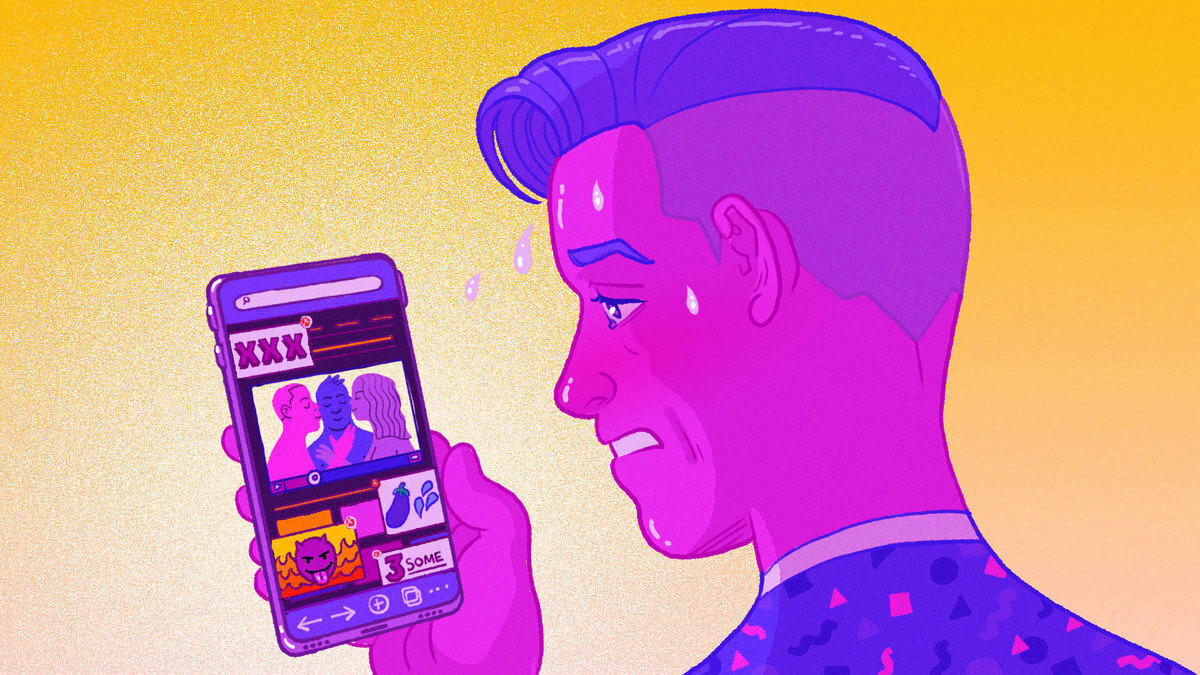 To know that, we’re going to have to take it back a bit, (to the naughties, specifically). This was a time when subcultures were accused of “cultivating bisexuality” (a polite reminder that sexuality isn’t a choice), and bi-curious-cum-queer-baity performances titillated on a huge scale, drawing the Sauron-like eye of the male gaze and subsequently a heck of a media frenzy. It’s also where a lot of the groundwork for present-day biphobia was arguably cemented in today’s contemporary culture.

My bisexuality is a huge part of my identity. However, it’s always felt fetishised. So much so, that as a teenager, it never felt safe for me to be out, or explore what my sexuality meant. On many occasions, I watched from the sidelines as friends braver than I opened up to our wider friendship group, only to be met with crude and often cruel objectification.

“I wasn’t about to kiss the girl I liked at a party just so the boys could circle-jerk each other and feel entitled to get involved.”

By the time I was a teen growing up during the 2000s, there was a mire of misogyny to wade through. It was an era of American Pie, the song “Scotty Doesn’t Know,” the (very, incredibly problematic) band Tatu, and, if you were part of the emo scene, every boy’s bedroom had posters of alt girls-kissing-girls-kissing-boys. There was Front magazine and hypersexualisation of female sexuality guised as liberation. Britney Spears and Madonna kissed at the MTV Awards, and even Katy Perry kissed a girl and liked it (apparently). And so, whatever feelings I had at the time were buried deep. I wasn’t about to kiss the girl I liked at a party just so the boys could circle-jerk each other and feel entitled to get involved.

The performance of bisexuality or bi-curiousness in the mainstream media left a damaging legacy for bisexual people like me: One that suggests that we are “easy,” promiscuous, confused, greedy, untrustworthy, non-committal, unicorns to the ménage à trois mix of MFM, FMF, MMFM, and FMFM combos, just a phase, too gay to be straight, and too straight to be gay. As a result, bisexuality has been somewhat erased from queer spaces, as well as non-queer spaces.

These events have laid a dangerous and incorrect groundwork for what bisexuality means to those not experiencing it, creating a disconnect that has placed bisexual people as one of the most at risk of rape, stalking, partner violence, and murder than almost any other section of society.

But it’s not just women who are affected by this. Often, bisexual men are left out of the discourse.

Placing penetration at the heart of gratifying sexual experiences erases an enormous amount of pleasure possibilities such as sensual touching, dirty talk, tantric breathing, and the introduction of external toys. Portraying bisexual sex exclusively in a threesome setting reinforces the notion that bisexual people are always up for anything (we’re not) or that we’ve all had threesomes (we haven’t). And, even then, while some of us may like to engage in more frequent and casual sex, that doesn’t mean that these actions are an invitation for solicitation. We do not exist to fulfil desires. Neither do we exist as a backdrop for fetish.

So, what is the antidote?

And, while the cultural conversation surrounding representations of bi-life are wanting from other aspects of our culture, such as more inclusive and representative sex education, there is undeniable power in where you put your money and where you spend your data.