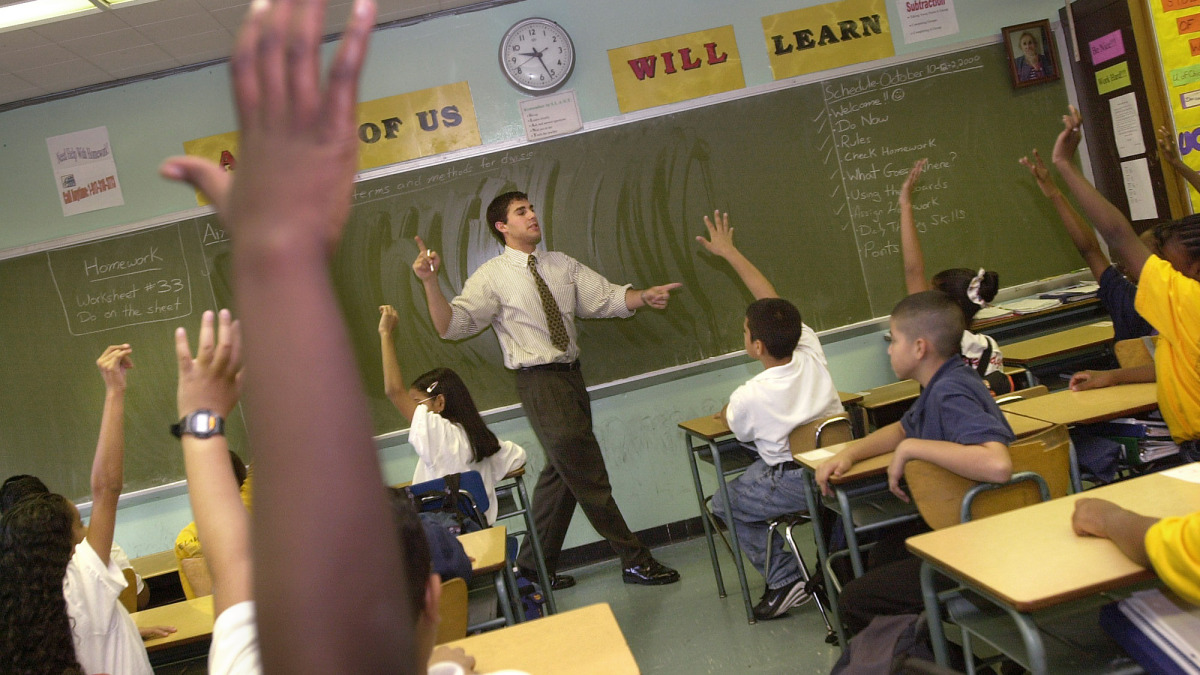 You might not spend much time thinking about the gender gap in education — that is, the difference in educational outcomes between boys and girls — but you should. These disparities affect people from childhood all the way through adult life, via the careers they choose and beyond.

Girls and boys receive different messages (both implicit and explicit) about who’s smart and who’s not. By age six, girls are more likely to call boys “really, really smart,” and shy away from games or activities that they view as for kids who are “really, really smart.” Race and class also have an impact. And this continues: Boys who go to school districts that are mostly white, high-income, and suburban usually test better than girls in the same districts.

Edward Morris, who teaches sociology at the University of Kentucky, researches the intersections of gender, class, and race in education. He thinks schools and teachers can help reduce the gender gap by not separating boys and girls in classes or expecting students to do well on certain tasks because of their gender or race. “Black boys are definitely the most behind in terms of all these educational outcomes,” says Morris, explaining that part of this is because Black boys are more likely to be disciplined in school than white boys (even for the same behavior).

There are organizations working to change these disparities, and you can help them in the fight. Each of the organizations listed before gets three or four stars, the highest rating, from the charity watchdog website Charity Navigator, or has been rolled into Charity Navigator’s new Encompass Rating System, which was created to allow them to rate more nonprofits. (Organizations assigned stars retain those ratings.) Pick one, or several, and donate if you have a few spare bucks — or simply raise awareness of their work on social media. It all helps.

The American Association of University Women (AAUW) is a gender-equity organization that works to increase access to education for all women regardless of race or ethnicity. It offers fellowships and grants to help fund women’s studies, advocates for policies to lower student loan debt (AAUW found that women hold nearly two-thirds of the $1.54 federal student loan debt in America), and encourages more girls and women throughout the country to pursue STEM professions.

Donate to the AAUW.

Women hold just 28 percent of science and engineering jobs, with prospects even worse for Black, Latina, and other racially underrepresented women who make up fewer than five percent of science and engineering professionals. It’s not that girls are worse at math and science than boys, it’s that they’re told (both implicitly and explicitly) that boys are better at these subjects starting in early childhood. Enter Girls Inc., a nonprofit organization that works in 350 cities across the U.S. and Canada and serves girls ages six through 18. It offers year-round programming, including after school and weekend activities to engage girls in STEM. And it gets results: The organization has found that with this support, 89 percent of its girls “find science or math interesting.”

The organization gives girls in grades six through high school who come from underserved backgrounds the chance to be educated in its public high schools (known as The Young Women’s Leadership Schools, located in New York City). The girls can take advantage of programming in “college and career awareness, STEAM (science, technology, engineering, the arts, and mathematics), health and wellness, and leadership development.” Often, these students are the first in their families to attend college.

All Star Code, headquartered in New York City, works to get young men of color in the tech field by teaching them computer science. Of all the scientists and engineers in the U.S., only 3 percent are Black men, according to 2015 data compiled by the National Science Foundation. Black students are also more likely than white students to switch out of STEM majors and earn a degree in another field, according to a 2019 study.

The organization was founded by Christina Lewis, the daughter of Reginald F. Lewis — the first Black person to build a billionaire-dollar business when he bought the global food company TLC Beatrice International. Lewis says she decided to focus on young men because she found many organizations that focus on the dearth of women in tech, but not men of color, according to All Star Code’s website. The organization works in both New York City and Pittsburgh. Its summer intensive program offers six weeks of coding, while also fostering a growth mindset. GPA isn’t used to determine eligibility for the program.

Donate to All Star Code.

Step Up mentors young girls throughout their four years of high school, serving almost 1,600 girls in Los Angeles, Chicago, Dallas, and New York City every year, and instills social-emotional skills that boost academic outcomes. Before entering the program, typically half of its participants are not on track to graduate, but with Step Up’s mentorship, 98 percent do so, says Delores Morton, Step Up’s CEO. About 87 percent of the mentees are girls of color.

“We focused on mentoring because it gives teens the social supports they need to realize their potential,” says Morton.

Donate to Step Up.

The National Center for Women & Information Technology was founded in 2004 by the National Science Foundation to address the underrepresentation of women and women of color in computing fields. The organizations offers support at all levels, from kindergarten to college, as well as professional career development tools for women already in the field. In addition to technical training, fellowships, and other financial support for young women, the center has compiled resources for educators and advocates. The BridgeUp STEM program, a two-year course in computer science and a research internship, is open to gender non-conforming youth, as well.

The Education Trust is a national nonprofit working to improve education gaps for students of color and those from low-income families through both on-the-ground efforts with educators, parents, and civic leaders, as well as national and local-level political advocacy.

The organization offers data tools and research to help inform and empower advocates working for improved access to equal education, as well as frequent organizing opportunities and even workshops and speaking events. In order to address the specific needs of these underserved student populations, the Trust also operates regional affiliates in the West, Midwest, and East (New York-based).

Donate to The Education Trust, or visit its regional sites for other specific ways to get involved.

TechGirlz is an initiative and resource organization created by the national nonprofit CompTIA Spark (formerly Creating IT Futures), encouraging middle school girls to get involved in the broad-scope tech industry through free workshops, learning resources, and teaching and summer camp guides.

Founded by Philadelphia-based IT professional Tracey Welson-Rossman, the organization partners with leaders in the tech industry, nonprofits, government, and education fields to design engaging lessons and introduce young girls to innovative and creative tech.

More than 50 free courses make up a curriculum that spans the range of tech interests and difficulty levels — from basic coding to game design to in-depth data analysis. The free resources of TechGirlz hope to engage both young women (and volunteering adults) who have previously lacked access to digital tools.

Donate to TechGirlz, or volunteer your time.