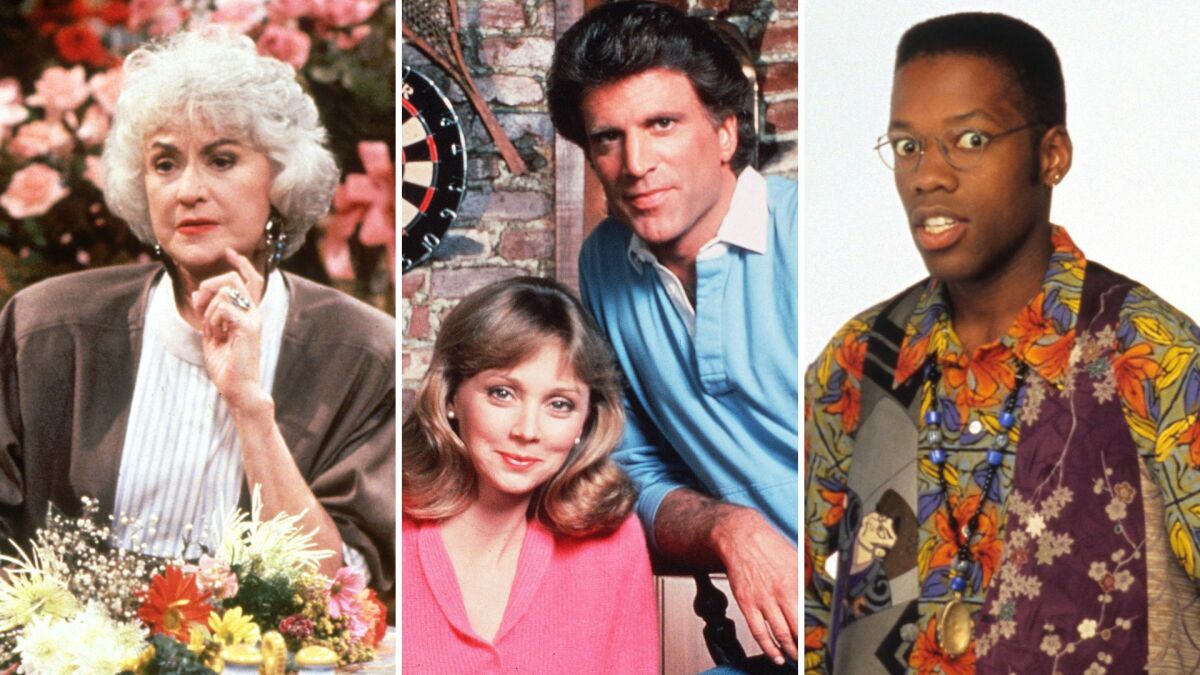 According to trend forecasters, the ‘90s are back, but anyone who was old enough to beg their mom for a pair of JNCOs knows ‘80s sitcoms are far better at offering a soothing respite from the world of today’s 24/7 news cycle and intense prestige television. Thankfully, Amazon Prime Video has a choice selection of frothy, fast-paced comedies whose characters usually solve their problems in 30 minutes or less, whether they’re coping with the everyday drain of gentrification, adjusting to college life, dealing with seriously weird workplaces, or simply convincing a furry new family member that the pet cat is not for dinner.

Here are the best ‘80s sitcoms on Prime Video(opens in a new tab) to watch on demand right now.

Adapted from a play by writer/sitcom creator Christine Houston, 227 stars Marla Gibbs as Mary Jenkins, a stay-at-home mom who rules the roost and the stoop at her apartment building in Washington, D.C., alongside her best friend Rose (the late Alaina Reed Hall). 227 features a wonderful ensemble that includes Regina King in her first acting role as Mary’s daughter, Brenda; Hal Williams as Mary’s husband, Lester; the delightful Helen Martin as wisecracking neighbor Pearl; and Jackée Harry, who won an Emmy for her role in 1987, as the flirtatious bombshell Sandra. The show, which recently celebrated its 35th anniversary, was part of a wave of sitcoms notable for normalizing middle-class, Black nuclear families in pop culture. (As a bonus, watch this brilliant homage to 227 on A Black Lady Sketch Show featuring Gibbs and Harry alongside the BLSS cast.)

How to watch: 227(opens in a new tab) is available to stream on Prime Video.

This spin-off of The Cosby Show follows Denise Huxtable (Lisa Bonet) on her journey to adulthood at Hillman College, the fictional HBCU that her television parents also attended. The coed misadventures of Denise and her roomies Maggie (then-newcomer Marisa Tomei), a white journalism student from Minnesota, and Jaleesa (Dawnn Lewis), a 26-year-old divorcée, along with delicate Southern belle Whitley (Jasmine Guy) and cutie Dwayne Wayne (Kadeem Hardison), were immediately addictive, as were their fashions. However, behind-the-scenes trouble and a surprise pregnancy for Bonet and then-husband Lenny Kravitz meant a second season shake-up and total reshaping in the adept hands of the legendary Debbie Allen. Although not all of the episodes hold up, the show broke ground in terms of talking about HIV/AIDs, safer sex, misogyny, and other heavy topics.

How to watch: A Different World(opens in a new tab) is available for purchase on Prime Video.

It’s kind of hard to explain how revolutionary Roseanne Barr’s primetime sitcom was — as was Barr herself during her stand-up and acting prime — unless you were there to witness its juggernaut in action, especially given its 2018 reboot and associated brouhaha. However, it’s definitely worth a try to enjoy Roseanne on its own ’80s-tastic terms, in its portrayal of an unabashedly blue-collar family dealing humorously and honestly with the ups and downs of everyday life, from unexpected pregnancies to a queer lip lock between Roseanne herself and guest star Mariel Hemingway. Roseanne also featured a slew of awesome actors in roles major and minor; in addition to the beloved John Goodman, Lady Bird‘s Laurie Metcalf, and the legendary Sandra Bernhard, Roseanne enjoyed appearances from Martin Mull, Shelley Winters, Ned Beatty, George Clooney, and a special one-show appearance by Bob Odenkirk as, um, a shoe salesman.

How to watch: Roseanne(opens in a new tab) is available for purchase on Prime Video.

Many decades before Ted Danson stole the show as a devilishly handsome silver fox on The Good Place, he spiced up primetime as Sam Malone, a former pro baseball player who drank his career away, only to find himself the proprietor of a charming neighborhood watering hole where everybody, well, you know. Sam spends his days and nights slinging drinks alongside his former coach, Coach; fiery cocktail waitress Carla Tortelli (Rhea Perlman); and erudite fish-out-of-water Diane Chambers (Shelley Long), a new cocktail waitress whom he spends several seasons flirting with in between flings. The witty banter, guest stars, and celeb appearances, as well as an overall cozy vibe between Sam and his regulars (Cliff, Norm, and, yes, Frasier and Lilith) make Cheers a timeless classic. And don’t forget about baby-faced Woody Harrelson, who joined as a main character in the fourth season.

How to watch: Cheers(opens in a new tab) is included with Paramount+ on Amazon for $9.99/month after trial.

Back before “boomer” was a dirty word, Family Ties portrayed a happily married couple of grownup hippies, Steven and Elyse Keaton, and the seemingly low-stakes friction between them and their less idealistic kids — especially their Young Republican son, Alex, who was played by Michael J. Fox with a certain warmth that the creators might not have intended the little Reaganite to have. Michael Gross and Meredith Baxter star as the thoughtful, loving parents struggling to imbue their kids with a more liberal outlook than the materialistic ‘80s would engender. Family Ties also boasts a constellation of fascinating guest stars, including Tom Hanks in a very special episode about alcoholism.

How to watch: Family Ties(opens in a new tab) is included with Paramount+ on Amazon for $9.99/month after trial.

If you’ve ever dreamed of retiring to Florida with a crew of your best friends, dating as a spicy septuagenarian, or simply hitting people with your purse and getting away with it, chances are high that Golden Girls is your ultimate comfort show. Dorothy, Rose, Blanche, and Sophia couldn’t be more different, but their love and loyalty for each other make them enduring icons for anyone invested in creating their own chosen family and growing old with wit and vigor. Stars Rue McClanahan, Betty White, Estelle Getty, and Bea Arthur all had vibrant careers before joining the cast — including acting in seminal feminist TV shows Maude and The Mary Tyler Moore Show — but Golden Girls cemented them in the pantheon of pop culture.

How to watch: Golden Girls(opens in a new tab) is available for purchase on Prime Video.

Growing Pains was a long-running family fave notable for showing a stay-at-home working dad (played by the late Alan Thicke, father of Robin) running the household while his wife (Joanna Kerns) heads back into the workforce as a badass reporter. Of course, it was also notable for the crush-worthiness of its teen male star, Kirk Cameron, who was frequently featured on the cover of magazines like Tiger Beat before becoming a born-again Christian at age 17. Speaking of crushes, then-newcomer Leonardo DiCaprio joined the cast in 1991 as a homeless teen who lives with the Seavers. Some aspects of the show haven’t aged well, such as the fatphobic “jokes” lobbed at Tracey Gold’s character, which triggered an eating disorder in the young actress. However, it’s certainly an interesting time capsule of the era.

How to watch: Growing Pains(opens in a new tab) is available for purchase on Prime Video.

10 of the best wireless headphones for watching TV

Night Court is definitely more of an adult sitcom for this era, in the vein of Cheers. The repartée is slightly more adult and the topic matter a bit racier — after all, it takes place during the night shift of a Manhattan municipal court in the ‘80s, way before Times Square was turned into Disneyland. The late, great Harry Anderson presides as trickster Judge Harry Stone. John Larroquette (who before he got famous did the creepy voiceover in the original Texas Chain Saw Massacre) is the sleazeball prosecutor and Markie Post is the public defender from the third season on. There’s also a bevy of cool folks, like comedian Marsha Warfield, Richard Moll, and recurring appearances by John Astin, Yakov Smirnoff, and Gilbert Gottfried, among others.

How to watch: Night Court(opens in a new tab) streams free with ads on Prime Video, courtesy of Freevee.

If you were a youngster in the ‘80s who ever felt kinda out of place, Punky Brewster and its themes of acceptance and chosen family was probably your jam — not to mention the incredible ‘fits young Punky pulled off in every episode, as well as the vivaciousness of star Soleil Moon Frye and her onscreen BFF Cherie Johnson. Johnson, whose uncle created the show, has since gone on to produce a number of TV shows and movies and has written several books; both she and Moon Frye are on the 2021 Peacock Punky Brewster revival. Sadly, the adult stars of the show — George Gaynes, who played the grumpy widow who reluctantly adopts Punky, and Susie Garrett, who appeared as Cherie’s grandmother — have both passed away.

How to watch: Punky Brewster(opens in a new tab) is available for purchase on Prime Video.

If you’re not familiar with the trials and tribulations of Zack Morris (Mark-Paul Gosselaar) and the other lovably weird students matriculated in Bayside High, it’s time to crawl out from under your rock. Like, yes, it was a Saturday morning show, so that meant rubbing elbows with cartoons and cereal commercials, but this seemingly wholesome ensemble comedy about teenagers in a moneyed part of Los Angeles also got somewhat educational on cultural topics like unhoused folks, addiction (“I’m so excited!”), the high cost of fossil fuels, and the dangers of drunk driving. Of course, there were also some missteps, but hindsight is 20/20.

How to watch: The first six seasons are available for purchase on Prime Video.(opens in a new tab)

The Tanners are a rather ordinary family with one seriously weird secret, and that secret’s name is ALF aka “Alien Life Form” — or Gordon Shumway, as he’s known on his home planet of Melmac. How to explain ALF, a primetime comedy starring a furry extraterrestrial puppet who tells Borscht Belt-style jokes and tries to eat the family cat alongside the family who seems to risk their safety (and definitely their sanity) by hiding him, except to say that the ‘80s were exceptionally strange and you just had to be there?

How to watch: ALF (opens in a new tab)streams free with ads on Prime Video, courtesy of Freevee.